Get to Know Your New Spurs #4: Alonzo Gee

Share All sharing options for: Get to Know Your New Spurs #4: Alonzo Gee

You know how you sometimes get a cereal box sample with your weekend newspaper? Maybe it's just me, but I absolutely love those individual-sized cereal boxes. When I was a kid, we only bought them for vacations/road trips, and predictably, the packs consisted mostly of the sugary goodies we didn't get at home. Ever since then, I get a little excited when one of these little packages shows up unexpectedly with the paper, but this could also be due to the fact that I like cereal and have been known to eat it for any meal.

Alonzo Gee is the Spurs' individual-sized cereal box this year. Sure, the carton looks good (his stats with the Toros), someone else thought it was tasty (Gee's time with the Wizards), but until you open up that box yourself and pour some milk on it, you never know if that cereal sample is just a bunch of sugary goodness (elite athleticism) or combines taste with actual nutrition (solid rotation player). Here's hoping that Alonzo ends up being Honey Nut Cheerios, and not just Fruit Loops.

Gee was born and raised in Florida, racking up back-to-back state titles and multiple awards on his way to being named Player of the Year his senior season. Alonzo then went to Alabama, where he was named to the All-SEC Freshman Team, played for all four years and started over 70 games. LD will appreciate this dunk that was named SportsCenter's Play of the Day on December 23, 2006.

Much like another Spur, Gary Neal, Gee was very disappointed to not be drafted by an NBA team. His mother didn't give up on him (as detailed in yet another great Ken Rodriguez article) and Alonzo landed with the Austin Toros of the D-League. All he did in Austin was become the D-League Rookie of the Year last season and throw down a few dunks in the Dunk Contest.

Gee's success in Austin resulted in a call up to the Wizards, where he played so well that the team signed him to two 10-day contracts - that's a huge deal. But for some unknown reason, the Washington brain trust (yes, typing those words made me giggle) balked at ponying up the cash to sign Gee for the rest of the season, and the Spurs swooped in and made Alonzo an offer he couldn't refuse. Truth About It has an excellent post lamenting the loss of Gee, along with a stellar interview, multiple quotes and massive dunks.

The FO obviously saw something in Gee to sign him to an unguaranteed contract for the upcoming season, but training camp is very important for this young man if he's going to secure a roster psot. Fortunately for Alonzo, the Spurs have a gaping hole at backup SF. Some sites have Gee listed as a SG, which is understandable, considering his 6'-6" height; however, he played the SF position with the Wizards, and Draft Express happens to agree with me. If you want even more confirmation that Alonzo's game is more suited for the 3, just take a look at last season's shot chart (NBA games only): 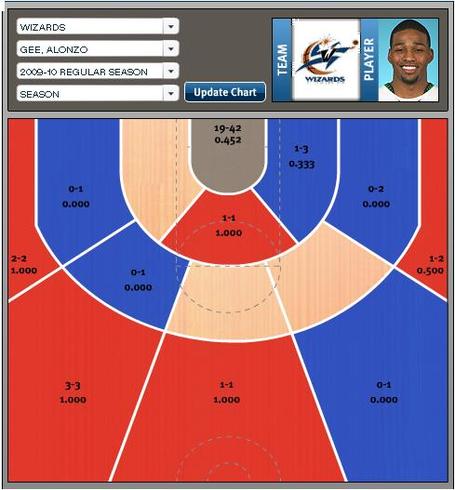 I think we can all agree that Gee's mid-to-long range jumper is a little suspect. What isn't suspect is his otstanding athleticism and his aggressiveness in going to the hole. Those are great qualities to have in a 15 mpg player. True, he's always been known more for the offensive end of the court, but Gee does have the physical gifts required to be a solid defender and has shown the ability to be an above-average rebounder. For Alonzo to get playing time (I seem to be writing this for all the new Spurs), he's going to have to show Pop that all-important effort on the defensive end and in corralling the caroms. Plus, it wouldn't hurt if he spent a little time with Chip working on that jumper.

I think Gee is big enough to bang with most backup SFs, but if he doesn't show Bowenesque desire, he could easily end up falling off the end of the bench all the way back to Austin. Personally, I'm pulling for Alonzo to make it, if only because he refers to his mother as the love of his life. What a sweetie!

One last note - Go visit YouTube for more of Alonzo's dunks. So very unSpurlike. But at least his FT% is a resounding 62%.