FIBA Championship round of 16 preview: Win or go home

Share All sharing options for: FIBA Championship round of 16 preview: Win or go home 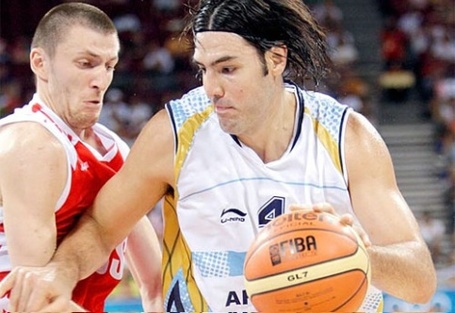 This man is very pesky

Group play at the 2010 FIBA World Championship is finished. The stakes just got raised, because now every game is an elimination game. Let's get it on.

The first round matchups look pretty uninspiring on the surface, but let's dig a little deeper. Here's a bracket, shamelessly stolen from the FIBA WC website: 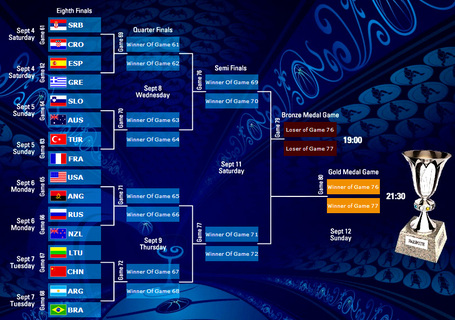 This one should be a yawner, but you never know with the rivalries between these former Yugoslavian countries. Serbia took first place in Group A after a close win over Argentina, while the Croatians were only able to defeat basketball powerhouses Iran and Tunisia in group B, which was good enough for 4th place in group B and a spot in the elimination rounds. The only names I recognize from Croatia are Roko Ukic(of Spurs-killing fame) and Ante Tomic, neither of whom play in the NBA currently. Meanwhile, the Serbs employ Nenad Krstic, as well as one of the best guards in Europe, Milos Teodosic(Olympiacos) and 2010 draft enigma Nemanja Bjelica(6'10" shooting guard). They are well coached, and only lost one game in group play, narrowly falling to Germany in a head-scratcher. Edge: Serbia

This is a rather unexpected first-round game. One of the heavy favorites heading into the WC is going home very early. The Greeks had a slightly harder group[on paper] than the Spanish and got third place for group C, but more concerning is the fact that only one of their wins was convincing, and that was over Ivory Coast, one of the worst teams in the tournament. As noted in the WC primer post, the Greeks have plenty of NBA-level talent that simply chooses not to play in the league, and the fact that all of their players are used to playing under FIBA rules should help them, but it hasn't really shown so far. Meanwhile, Spain finished second in group D, and had 2 losses despite having the largest point differential in the group. These guys coasted in group play at Eurobasket last year, before ripping up everyone else on the path to the championship. With that in mind, I give them the benefit of the doubt. Edge: Spain

PtR's Aussie contingent has to be fairly happy with their team's fortunes so far. Nearly pulling off a win vs. Argentina is pretty impressive, but they might just be out of their element. Patty Mills has been an effective, if inefficient, leader for the crew from down under, and David Anderson still sucks has been effective as well. A couple of other guys play for some the top Euroleague teams, but I'm not familiar with them. Slovenia, meanwhile, has played very well despite not having their two most familiar players to Spurs fans, Beno Udrih and Rasho Nesterovic. Dragic and Nachbar have been impressive, and there's another Udrih who I'm assuming is related to Beno somehow. These guys jumped all over Brazil early, but nearly choked away the win. The Slovenians' only loss was to the unbeaten USA team, so I'll give then the advantage. Edge: Slovenia

The French started out their tournament 3-0, on the strength of good play from Nic Batum and Ian Mahinmi(oddly enough), but dropped their last 2 games against tougher competition to finish 4th in group C(ouch). Odder still, Spurs pick Nando De Colo was utter crap in the first couple of games, but has put together a pretty decent-looking cumulative statline in group play, shooting over 50% from 3 and comitting only 11 turnovers in 5 games while playing PG. The French only seem to win win he plays badly, though, which isn't encouraging. Meanwhile, Turkey was the most impressive team in group play not from the USA, going undefeated in a group that includes Russia and Greece. Their average margin of victory was over 20 points, helped by great performances from Ersan Ilyasova, new Celtic Semih Erden, new Bull Omer Asik, and former Spur Hedo Turkoglu. OK, I'm lying on that last one - Hedo is shooting just over 30% on the tournament, but he does lead the team in assists. The Turks are an up-and-coming team, and they're playing the entire tournament at home. Edge: Turkey

The Americans have been slightly better than many expected, with a clear leader in Kevin Durant helping to keep things running smoothly. The scare against Brazil was the only game that was even close, and a lot of things had to go right for Brazil(like, say, Tiago owning Odom and Chandler) to make that happen. Judging by group play, the US has to be the clear tournament favorites at this point. But, that's why they play the games. Angola probably feels lucky just to be in the elimination rounds, as they don't have a single player from one of the major Euro leagues or NBA. Barring an epic American meltdown, they'll be going home in a few days. Edge: USA

I think we have at least one Kiwi PtR member, but can't remember who it is. Anyway, Kirk Penney has been kicking some serious ass, averaging over 25 PPG in the tournament so far. This guy has probably earned a nice Euro contract once the tournament is over, so good for him. Russia, meanwhile, won a lot of close games in their group, but didn't dominate anyone. Timofey Mozgov is the lone NBA-er in the bunch, but Sasha Kaun of CSKA has clearly been their best player so far. That's a pretty dominating frontcourt that will be hard to take advantage of. Despite my better instincts, I'm going with the upset in this one. Edge: New Zealand

I've never understood why China can't field a better team. Interest in hoops seems to be fairly high in the world's most populous country, and yet their national team always seems to be pretty terrible. This year is no exception, as the Chinese won only one of their games in group play, relying on Yi Jianlan and Sun Yue for most of their offense. Without Yao(good for him, btw), the Chinese are pretty much done. Lithuania, meanwhile, was the third undefeated team in group play and is one the traditional hoops powerhouse teams. The clear leader on offense is Linas Kleiza, who is having a very good tournament and is the lone NBA player on the squad. But many of the other Lithuanians play at the highest levels of hoops in Europe, including the Spurs' one time love, Robertas Javtokas, who will be joining De Colo in Valencia next season. This game shouldn't be a challenge for them. Edge: Lithuania

Oh, the juicy Spurs-related storylines of this game. First, let's talk about the guy who's easily the MVP of the tournament so far, and a guy for whom Spurs' fans hearts always beat a little harder out of anger about how his situation was handled: Luis Scola is averaging 29 PPG and 8 RPG for the tournament, and has shown himself to be an unstoppable force. Fab Oberto's barely seen any playing time, as the Argentines seem to have played smallball with usually good results most of the time. Enter the man whose task it will be to slow down Scola, and make Spurs fans feel at least a little bit better about their South American big man situation: Tiago Splitter. Tiago has been the leader of the Brazilian team this summer, if not the leading scorer. His scoring, rebounding and defense have contributed greatly to the Brazilians' success, and helped to offset some of the bad things done by a certain former Sun. Speaking of which, Huertas and Vinicius are great team players, while Leandro Barbosa is f5g horrible. It's too bad Barbosa takes so many shots and possessions away from his teammates, because this team might have a chance if not for his selfishness. Edge: Argentina

So, there you have it. Feel free to use this thread as the aggregate game thread for all of the games, and let's talk again before the quarterfinals.