This year's World Championship has been fun to follow for me, but sadly, it's almost over. I'll admit to not bothering to follow the WC in previous years, but my thirst for hoops has become insatiable since joining PtR a couple years ago. Of course, it helps when your country has an incredibly talented, yet humble, superstar as its leader. 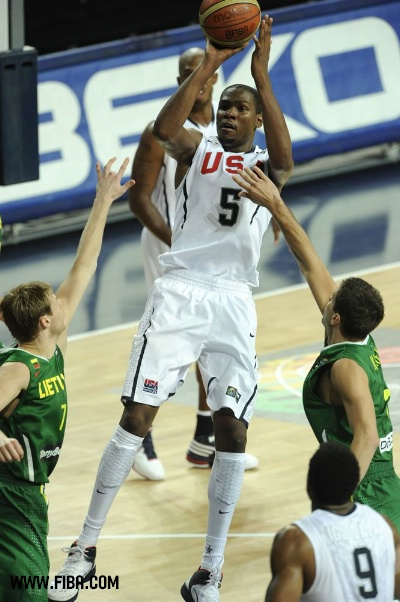 Following some dramatics from the last two rounds of the World Championship, there are now only two teams that can bring home the gold. Well, one of them wouldn't have to "bring" it anywhere, since they're already at home. The other team is theoretically the best team in the world(on paper, anyway). Sunday, they will play one game to determine the World Champion. Let's get it on.

But first, the bronze medal game should be mentioned.

The Lithuanians scared me coming into their matchup against Team USA. The Baltic nation has long been a stronghold of international hoops, and their utter demolition of Argentina made me wonder if the US was going to lose before the medal round yet again. And they looked good, but the US looked better, and Kleiza was absolutely no match for Durant. Serbia almost pulled off a win over the unbeaten Turks on Saturday. Almost, as in, it was a one-point game that came down to the final play. I've been selling them short over the course of the tournament, so I think I'll give them their due this time.

This has been the anticipated final matchup ever since these two teams finished their dominating runs in the group stage. The Americans seem to have figured out how to beat some of the better teams, and Kevin Durant is positively unstoppable. He's gotten better as the tournament has progressed, and simply will not let this US team lose. He cares about nothing but winning this tournament, and the lack of size in the USA frontcourt is more than offset by his scoring outbursts(38 in the semifinal game, for example). Turkey has played dominating ball from the start of the tournament, but had a lot of trouble in their close win over Serbia, trailing for most of the game. Hedo Turkoglu, Ersan Ilyasova and company are going to have their hands full in the final, and I just don't think they can defend well enough to stop the American onslaught. Also, I'm an American and refuse to pick against my team.

The final starts at 1:30 PM Spurs time on Sunday. Feel free to discuss the final, as well as the bronze medal game, and the 5th place game between Argentina and Spain here in this thread.