At this point, we are all very familiar with Tim, Tony, and Manu. Barring injury, these guys will give it their all to get the Spurs back to the finals. In addition, we know what Bonner and McDyess are all about. Bonner will spread the floor and McDyess will be a competent, veteran big man who will never negatively impact the team. However, our fate is not solely controlled by these guys. As we witnessed last season, the Spurs' veterans can only go so far without help. Given the suddenly stacked nature of the NBA, we will need Tiago Splitter, George Hill, DeJuan Blair, and Richard Jefferson to step up in a big way.

This is all about potential, and admittedly, I set the bar very high. However, the potential I describe for each player is very attainable. Our role players possess all the necessary physical traits. It's just a matter of hard work and a little bit, (okay, maybe a lot,) of luck. So, let's begin. 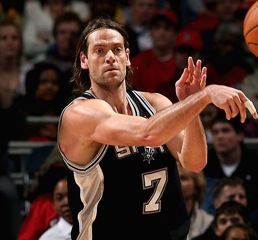 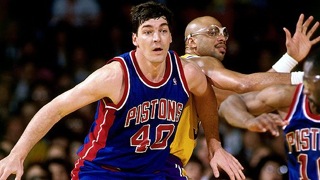 Tiago has an extremely high basketball IQ. We need his intelligence to shine on the basketball floor. His athleticism is lacking, so he'll need to anticipate as well as Oberto used to on the defensive end. We need him to move without the ball and score off of offensive rebounds and hustle plays. We have so many players on the roster that require the ball to be productive, Tiago would be a perfect fit for us if he could positively contribute without having plays called for him.

And what is Bill Lambeer doing here, you might ask? Well, I would really like it if Tiago brought some physicality to the team. McDyess is a physical player, but at 6'9", his presence is limited. If Tiago can bring a 'Bill Lambeer' mean streak to the team, that would be optimal. I'm only asking for a few hard fouls at the rim, preferably on Lebron. It's not too much to ask, is it? In addition, Lambeer had a nice offensive game. He had a few very reliable post moves and also was adept at facing up from 15 feet and creating. Tiago has the potential to be a dominant big man in the league and I'm very excited to see how he plays this November. 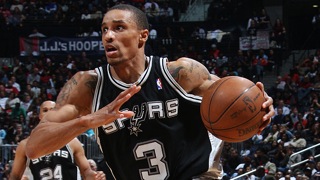 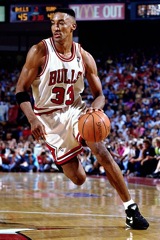 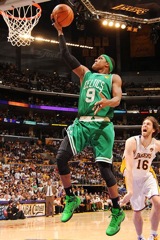 I know this will sound blasphemous, but when the Tony Parker trade rumors were being thrown around, I responded with, "Yes, please." And it's not because I'm a Tony Parker hater. He's one of the better point guards in the league and few can match his skill in the open court. I wanted the trade to happen because I want to know, how good is George Hill, really? Regardless of what Nash did to him in the playoffs, George is a very good defensive player. Can he be a great defensive player? I believe so. He just needs the playing time and opportunity to learn. Pippen was one of my favorite players growing up because the guy could defend anyone. His long arms and quick feet gave his opponents fits. Although shorter in stature, George Hill possesses the same athleticism that allowed Scottie Pippen to be a great defender.

Pippen was also a great spot up shooter. Last year was a promising one for Hill's jumper. I went from screaming, "No!" every time he took a three to screaming at Tony, "Pass the ball! Hill is open in the corner!" If Hill can master the open jumper, his ceiling will jump.

Rajon Rondo is a great creator and is deadly in the open court. He has the same body as Hill: wiry, super long arms, and quick feet. Rondo lacks a jumper, which is why Kobe was able to play 6 feet off of him in the playoffs and take away his drive. Hill's jumper already commands the respect of his defenders. If we give Hill the opportunity, he just might be an NBA star. Not just a solid role player, but a legitimate All Star. Let the "Free George" chants commence. 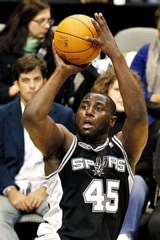 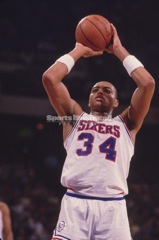 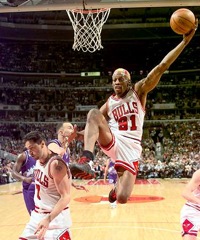 In the comments section of a recent post, I was asked if I thought DeJuan Blair could be a Wes Unseld type player or if this was just not the right era for a 6'7" big man. Well, I think DeJuan proved to us last year that he can be a very productive player in today's NBA. Charles Barkley showed us how a 6'7" big man can be extremely effective against taller players. As far as I can tell, all that DeJuan is lacking is a short jumper and some playing time. Barkley was a match-up nightmare for his opponents because when he was guarded by a taller player, he would take him 15 feet from the basket and use his speed to get to the rim. His jumper demanded the respect of the taller players so they could not play him for the drive. When a smaller player attempted to guard Barkley, he would take them to the post and use his big body to dominate.

Sources reported that Pop has been working with Blair to develop his jumper. If DeJuan can hit it with consistency next season, he will be close to unguardable. The addition of Tiago should help to cover up DeJuan's weaknesses on the defensive end. I hope to see the Tim/Tiago, Blair combination used early and often next season.

I threw in a picture of Rodman because Blair has a knack for the ball. Rodman always seemed to be in the right place at the right time. It was no accident. He worked relentlessly to get good rebounding position, sometimes for the Bull's entire possession. I witnessed Blair display this same determination last season. So where is Blair's ceiling? I have no idea. I just know that he is no where close to it yet. 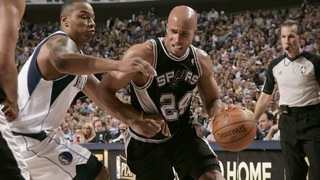 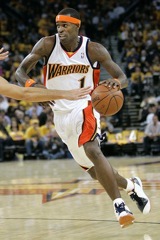 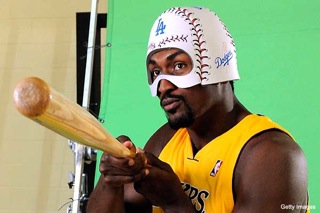 I want Richard Jefferson to be Stephen Jackson minus the crazy. RJ already has the slashing, penetrating ability that Jackson gave us as a Spur. In addition, RJ is arguably the superior athlete. What RJ is lacking is a consistent jumper. Without a shot that commands respect, defenders are able to play him for the drive, thereby negating his greatest strength. Furthermore, it kills the Spurs flow when RJ passes on wide open shots. Tim, Tony, and Manu force defenses to collapse into the paint, leaving our shooters wide open. When our shooters are unable to punish the defense for leaving them, it significantly lowers the probability of a Spurs victory.

The problem is, gaining confidence in your shot is not a science. There is no confidence formula that guarantees success. An inch off from twenty five feet away is the difference between a bucket or a miss, confidence or despair. Hopefully RJ finds his shooting stroke during the off season. If he can shoot 40% from distance again, his contract extension will be more than justified. The lanes to the basket will open up and he will be demanding the ball, rather than passively hiding on the floor.

I get the feeling that this season will define RJ's existence with the Spurs. If it goes well, fantastic. If not, I feel as if he has a little crazy in him. We do not need the Artest up and downs. We do not need the crazy Artest shot selection. And we definitely do not need him chasing the owner's bus in his underwear.

More than any other player, RJ controls our fate. It sucks, I know, but when he plays well winning comes much easier to the Spurs. In wins last season, RJ shot 49% FG, 39% 3P%, while scoring 13.5 points. In losses, 43% FG, 21% 3P%, while scoring just 10.4 points. Simply, when RJ is rolling, the Spurs are a great team. We need to do whatever we can to build his confidence. We need consistency and accuracy from him. If RJ can deliver, and I know it's a big 'if,' the Spurs will be a very dominant team next season.

Every team has 'ifs,' by the way. I do not think it's a bad thing, more a reality of the NBA. If Oden and Yao can remain healthy, the Blazers and Rockets will be dangerous. If Lebron and Dwight learn low post moves, the Cheats and Magic would be close to unstoppable. If the Lakers had a soul, they wouldn't be the Lakers. And if Richard Jefferson improves, the Spurs will be a true contender. It is an 'if,' but it's an 'if'' that I feel good about.