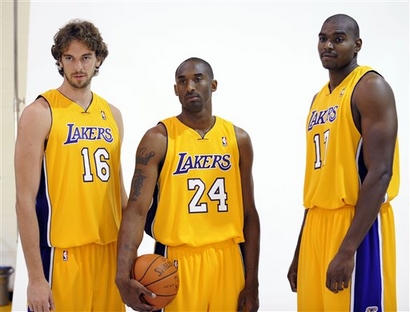 UGH. Will somebody please beat these guys?
via live.drjays.com

Last weekend, I made a feeble attempt at ranking the Eastern Conference for the 2010-11 season. And while all the dominoes have yet to fall into place, I think enough moves have been made to sufficiently rank the West as well. Follow me beyond the jump for pain and sorrow.

I feel no need to defend this team's position at the top of the list - they've pretty damn well earned it. The only thing I might question is how well Kobe's body can hold up after years of abuse, but that's never really been a problem for him, so I wouldn't expect it to be now. The evil empire has better depth than they had last year, though. FML.

As a USF alum, I'm a Jones fan. As a Spurs fan, I fear our northern neighbors may have found their answer to George Hill, and I hate that he plays there(great pick and roll scorer, unfortunately for George). They definitely found the best defensive center they've had in a long time, if Chandler can remain healthy. Undeveloped chemistry(big mid-season trade) and horrible matchups were Dallas's undoing vs. the Spurs in 2010, and they look poised to make another strong push.

We didn't exactly lose a lot. Bogans was probably the best of the trio of wing players that have left, and I'm not so sure the Spurs aren't bringing him back. Splitter, on the other hand, is the greatest hope for an improved silver and black squad. Well, him and a fully-healthy Tony Parker. This team will probably get off to a rough start while Splitter gets acclimated to NBA play and Pop's system. Thankfully, his defense shouldn't require much adjustment, and that's where my hope for this team lies. If our defense in the paint improves, our guards and wings can play their man closer, and do a better job of challenging jumpshots. At least, that's how it works in theory.

Did this team actually get deeper? WTF. For what it's worth, a healthy Portland squad probably would have given any team in the league a run for their money last year, and (again, when healthy) they seem like the Lakers' own version of kryptonite. So, as a Spurs fan, I hope they face our old "friends" from LA in the playoffs before we do. But then we have to find a way to beat Portland, which we didn't exactly do last season. FFFFFFFFUUUUUUUUU

Some people are putting these guys at #2 in the West. I made that mistake with Portland last year, and am not about to repeat it with OKC. However, they look like a better team on paper than they were last year. And if they bring 2010 draft pick Tibor Pleiss over from Germany(great defensive big man), they could be downright scary. Cook is kind of a head-scratcher for me, though - Thabo and Harden seem to have the SG position locked down, and and Peterson or Green probably take over SF duties when Durant isn't in the game, since Cook is undersized for that spot.

This depends a lot on the team's mental state. They faltered towards the end of last season, and I don't know whether that was because they didn't have George Karl there, or if the Nuggets(as they are wont to do) simply wilted in the face of adversity. If Melo doesn't get his max extension before the start of the season, I could see that becoming a gigantic distraction to a team that's already fragile, and they could even miss the playoffs altogether. For now, I'll have more faith in Karl, and keep them in the race.

A healthy(ish) Yao, along with Miller and Patterson should give this team the frontcourt depth needed to make the playoffs. Hell, even without a healthy Yao they've got a pretty damn good frontcourt. Add in all the firepower they have at the guard positions, along with their two headed defensive SF brigade, and this team will not be easy to beat. The West is still pretty damn tough.

I find Jefferson to be vastly overrated, but Sloan and Bell are a match made in basketball heaven. This team swept us in regular season play last year, and they'll still be very difficult to match up with. After watching a couple of their summer league games, I can say that Hayward's an underrated, smart defender as well. Even though I don't think they've done enough to replace what they lost, they should still be a playoff-caliber team.

This was tough. I didn't want to count Phoenix out after what they did last season, and I think Gentry is a great coach, but the Suns are going to have massive problems defending the interior, especially if they use Hedo as a 4, as has been suggested. Re-signing Amundson should have been a priority, too, and if they don't act quickly, I'd love to see the Spurs add him. As great as their team chemistry was last year, I have my doubts as to whether the role players will be able to do enough to keep this team in the playoff picture. I also think age might finally catch up to Nash and Grant Hill, despite the great medical staff they have.

Griffin is a beast, despite being hurt last year. Even more of a beast than DeJuan Blair. This team has enough talent to make a push for the playoffs, but bad chemistry(high offseason roster turnover) will sink them, IMO. Also, Sterling has to be bad karma, no matter how much talent is on that roster.

This team is going to be really, really good in a few years if they can keep it together. That frontcourt rotation looks amazing. Evans, Casspi, Greene and even Beno can score in bunches. If they can learn to play defense, they could easily jump up into the playoff conversation. But I'm thinking they won't. Not yet, anyway. We'll see. It's a little weird that they haven't signed Hassan Whiteside yet, but he could be a valuable role player for them.

It's worth noting that Memphis has signed precisely zero of their 2010 draft picks, and they're currently in a staring contest with Henry over a whopping $300K. Meanwhile, nobody's said a damn thing about why Vasquez hasn't been signed yet, but as a first rounder, he's guaranteed to get one. If the Grizz are going to extremes to keep money away from the best shooter in the 2010 draft class(apologies to our own James Anderson, but it's true), then Rudy Gay's contract makes absolutely zero sense. Congratulations, Chris Wallace - you're creating tension on an already volatile squad.

I realize that this may be a surprisingly low spot for the NOOCH, but it's worth noting that their best wing player is Marcus Thornton. Well, Pondexter may surprise, but we'll wait and see on that one. Honestly, outside of Chris Paul(who wants out, no matter what's said publicly) and David West, this team is pretty bad. Other teams in the West have gotten better, but the NOOCH have been slowly eroding away. It should also be noted that West has a player option after this season, and since it pays less money than he currently makes, it's almost a certainty that he opts out. Dell Demps has a big challenge in front of him.

Luckily for the Dubs' front office, the fans are probably going to go easy on them this year after the big ownership change. Theoretically, they should finally have some defense on the perimeter with Wright and even Bell. But these guys lost a lot of offensive punch, and Udoh is already injured. I hope these guys prove me wrong, but I just don't see much hope for them to do better than last season.

KAAAAHHHHNNNNN! Apologies to T-wolves fans, but the moves made this summer don't look like enough to get the league's worst team(again, NJ was better than that terrible record) last year out of the cellar. Johnson looked like a bust in summer league, and Ridnour might do better than Sessions in the triangle, but I doubt it will be significant enough.

So there it is. Now tell me how stupid I am in the comments.