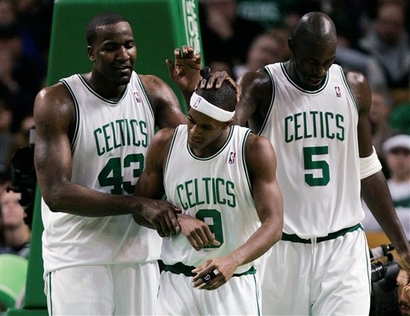 Did you miss us, olf?
[image via www.sportsofboston.com]

The other day, a Bleacher Report article predicted that the Spurs wouldn't make the playoffs, which predictably caused a little bit of a stir around here. Since most of us disagreed, I thought it would be fun to attempt my own rankings of the NBA conferences during the offseason down time. I tried ranking the West last year, and ended up looking pretty foolish, as two of my top three teams fell to a team I predicted to not even make the playoffs (Phoenix). This year, I'm going to try my hand at both conferences, and hopefully do a bit better. We'll start with the East, and then I'll try to crank out the Western rankings in the next few days.

The defending conference champs didn't get any weaker over the summer. My only question would be how well Ken Perkins recovers from his injury. With apologies to Miami, four stars is better than three. Especially when they all play defense at a high level. O'Neal will give them decent depth with Perkins' status in question, and Bradley gives them even more defense on the perimeter. The C's may actually be better than they were last year.

This team's been together quite a while, for the most part, and their team defense is always near the top of the rankings. I still don't understand how Dwight hasn't learned any post moves since entering the league, but I'd rather he not pick them up this summer. Q-Rich gives them a bit more offensive versatility on the perimeter, and Orton is sort of a mystery, but if he pans out, Orlando will suddenly have great frontcourt depth. I'd still like our Spurs to trade for Pietrus if possible.

The superfriends haven't really convinced me yet. My opinion of them might change as soon as they complete their roster, but right now they look to have some pretty shoddy defense, especially on the interior. When things slow down in the playoffs, that would hurt them quite a bit. Offensively, they look incredible, and it's going to be nearly impossible to get stops if they mesh well enough. But the weakness on the other side of the ball makes me think it's better to defer to the teams that have been proven over the last 3 years or so.

This team struggled to find any sort of consistency last year, especially on offense. Tom Thibodeau isn't exactly known for his offensive prowess, but he should be able to tighten up the Chicago defense to be even more impenetrable than it has been over the last 2 seasons. Adding Boozer and his former Utah teammates Korver and Brewer gives the Bulls a good balance of post offense, 3-point shooting and perimeter defense. All this in addition to Rose's slashing/creating, and Noah's interior defense, with Watson and Luol Deng for bench scoring. It seems like these guys all complement each other, so this could turn into a very, very good unit. If they gel, they will be a force to be reckoned with.

The Hawks didn't really add anything, and I think Joe Johnson is going to start declining now that he's earned signed that ginormous contract. I really don't have anything else to say about these guys.

I'm scratching my head at the deal Gooden got, but I think the Bucks had a good summer otherwise. Resigning Salmons was a big deal, and trading next to nothing for CDR and Brockman were excellent moves. The only reason I didn't move them ahead of Atlanta is because of the tendency of Skiles to "lose" his teams after a couple of years. If he can hold them together, they'll be better than the Hawks.

Larry Brown is a great coach, and he loves good defense. That probably explains why Charlotte was the #1 defensive team in the league last year, and their defense may have be improved for the upcoming season. But I don't think this team will get very far in the playoffs with Stephen Jackson as their top scorer, and everyone on this team who isn't Jackson or Gerald Wallace will struggle mightily to score points.

Yes, you read that right. I'm picking the newly Lebron-less Cavs to make the playoffs. There's still enough talent left on this team to make the playoffs. But they won't be a factor once they get there. Eyenga's going to be a pretty good player, and Byron Scott knows how to get the most out of his teams. In this case, that means beating out other teams with similar talent levels for the chance to play the East's #1 seed in the first round.

That's right, I have the exact same 8 teams making the playoffs as last year, just in a slightly different order. I'm so edgy.

This was actually a tough call, but I think D'Antoni will get this squad to win just enough games to make the playoff picture more interesting, without getting in themselves. If Chris Paul gets traded here, I would immediately bump them up to 6th or so, but for now they stay outside the playoff group. I'm betting Carmelo could do some serious damage in 2011-12 as a Knick, though. Those are some serious frontcourt upgrades, though, and with a decent half-court coach, they'd easily make the playoffs.

This team was not as bad as the record they put up last year (Minnesota was actually the worst team in the league by far, IMO), and they made some good moves to upgrade their roster this summer. The Lopez/Favors frontcourt could be a nightmare for opponents in a couple of years (if not this year), and Harris, Morrow and Outlaw give them plenty of scoring punch on the perimeter. But their depth chart looks disturbingly thin. And giving Johan Petro a $10 million contract is insane.

Another team that should have had a better record last year, the Sixers added a very good scorer in Turner. It may take him a while, but he'll find his groove and make this team very entertaining to watch, even if they're losing most of their games. Igoudala and Speights are possibly the most athletic forward tandem in the league, and Hawes should be a good fit in the middle. I like this team, and I hope they prove me wrong by making the playoffs. But I won't hold my breath.

Dumars has finally screwed up in the last couple of years, and I can't see things getting a lot better for Detroit. But I like Monroe, and think that he's a good fit for the team they have now, so that should help them win a few more games this year.

George is an intriguing prospect, and one of my favorite players from the most recent draft, but the Pacers still don't have a point guard. Does David Kahn hate Indiana? I just can't see this team improving on last season with the moves they haven't made, as unfortunate as that is.

Welcome to the NBA, Gilbert Arenas John Wall. These guys are so redundant that I won't bother explaining why I don't think it will work. Hinrich is a plus, but when will he even play? And they still have no defense in the frontcourt. At all.

Bryan Colangelo is giving KAAAAAHHHHNNNN a run for his "worst GM in the league" money. I don't understand the Hedo trade, and giving Amir Johnson huge money is another crazy decision. Add the loss of that Bosh guy, and this team appears to be in free fall.

So that's it. Feel free to tell me where I screwed up, or to give your own rankings here.