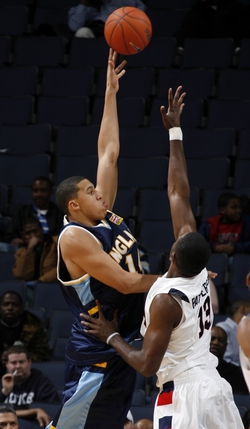 All that and more. Hopefully.

So while everybody slobbers over the great James "Mr." Anderson, I decided to pull up the trusty search engine and try to give a little attention to our second round pick, Ryan Richards, who some of my sources saw crying in a little corner of Madison Square Garden right after everyone else left the building.

What do we make of this pick? You can't really go with the glass half-full/half-empty approach because that's saying he's a lock to stay in the league, whether as a star, a role player, an end-of-bench reserve or a practice dummy. No, I'm gonna go look at him with a glass completely full or completely empty approach -- either Ryan "English" Richards can be a super duper star as a Dirk Nowitzki-Dwight Howard hybrid and becomes a trailblazer of some sort for basketball to replace football ("soccer") as the national sport in the UK, OR someone who won't even step foot in the L and probably go back overseas dunking on hapless short people, playing bagpipes while wearing a kilt embroidered with "I <3 Spurs" just between the butt crack and the tailbone. Only those two things, nothing more, nothing less.


Set to loop in Ryan's iPod during the draft.

I called this post the "Ryan Richards Redonkulous Potential" thread (the "!!!" was for effect, obviously), but I could've used "upside" or maybe "promise" or perhaps "motor" or "length" in honor of Jay Bilas. Using upside is quite dangerous, see, because you're also saying that there's a downside, and we, the definitively biased Spurs fans, don't want to see that in whatever draftees RC Buford chooses. He's RC Buford, dammit, unless you wanna get your behind kicked:

Reporter: So... RC, what about that Tony Parker for the Nets' Devin Harris and the 3rd pick rumors that have been going around the internet, specifically from this awesome site called 'Pounding The Rock'?

RC Buford: Excuse me, do I know you?

Reporter: No, but I have a press pass and have been following the NBA for years on my laptop.

RC: You decided we had to let one of our all-stars go in exchange for a player who only competes on an every-other-day basis and the 2nd coming of Kwame Brown?

Reporter: No sir, I was just asking to confirm if the rumors were tr---

RC: Nah, you're a genius so we'll do it. Deal done, probably have it approved by Stern later and then we'll have to ship out Tony in a private jet stuffed with baguettes in the next 24 hours.

Reporter: Cool... I could totally be a GM, then?

RC: Yes, because obviously I'm not doing my job and I don't even know that Tony Parker's an NBA champion 3 times over and a Finals MVP who can dominate Derek Fisher. And I can't tell how many fingers I have from the number of my toes.

Reporter: You're messing me with me. 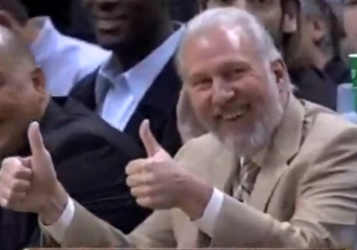 So upside is definitely out while promise sounds a little bit Nicholas Sparks-ish (NTTAWWT) and I haven't seen a player who has completed Jay Bilas' prospect skills checklist. On the other hand, "potential" sounds more intriguing and dramatic. It's like everything is there for the taking, the world is his playground, he's got the whole world in his hands (sing it with me), and all that stuff. There's really no downside to it, because if that potential isn't achieved, he'll just be who he is from the beginning and won't go down any deeper. He's just another average joe who can score a hot chick in a reality TV show, at best.

Think about your breakfast eggs. The "potential" of that egg can be pretty immense -- it can achieve the perfect sunny side up shape, have a soft, juicy yolk in the middle along with the sides burnt to a magnificent crisp. The egg has the potential to be all of that. If it doesn't come out like that, heck, it's still an egg and tastes like any other egg in the world, right? No disappointment in life, we all move on and the egg eventually gets digested in your system and returns to the earth a few hours later. That, my friends, is the power of potential. And I believe in Ryan Richards' ability to achieve that and not be the usual discarded egg.

Don't believe me? Let me count the ways to enlightenment.

#1: Ryan Richards is a young stud.

Richards, a bouncing 15-year old back then, was the youngest player to ever play in the Nike Hoop Summit, an all-star game pitting the best of USA junior basketball against the top junior international prospects. He played with some interesting teammates at that time which included Omri Casspi, Solomon Alabi, Nic Batum, Petteri Koponen and the great Alexis Ajinca. 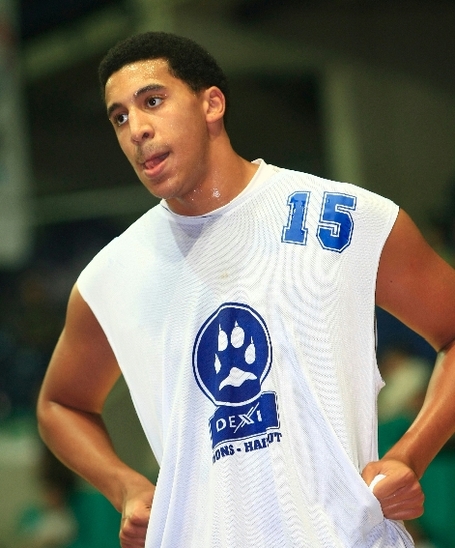 Unfortunately, he only logged in 3 minutes but heck, even another RR -- Ricky Rubio -- couldn't crack this meeting when he was 15. Major props to the Spurs' RR.

Speaking of RR, Richards is capable of replacing the team's other RR: the Red Rocket, Matt Bonner. I mean, Bonner's shoes aren't actually hard to replace, and I bet anyone on PtR can replace his contributions. Good thing for Ryan is that he's as tall as Matty and can probably stroke it from the outside as well as Ginger, too.

But the comparisons end there. While Bonner's flaming head of hair can never be replaced ever, Ryan can handle the basketball pretty well and can put an end to the many times Spurs nation drew collective gasps whenever Matt put the ball on the floor and did any of the following: 1) throw up a shyhook; 2) lose control of the rock and turn it over; 3) get stripped by a guard and turn it over; and 4) throw up a shyhook, miss and the NBA statistician records it as a turnover anyway because heck, he's Matt Bonner! Everything he does is the equivalent of a turnover! [this portion sponsored by FARS(TM)] 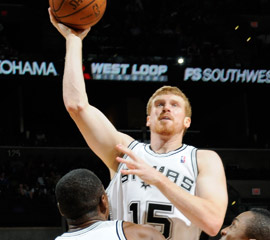 Re-sign or not, you're still Ginger to us, Matty!

Defensively, Bonner might be better now, but Ryan's ath-uh-leticism guarantees that he will at least achieve Bonner's maximum defensive efficiency while spending at least half the effort. Richards can probably challenge Matt to a foot race, give Bonner a 1 mile headstart, throw down 50 dunks before starting and still finish a full 3 miles ahead! Wow, what an absolute steal.

"Seven-foot English center Ryan Richards couldn't get on the floor for his Spanish team so it had to loan him to a team in Switzerland? Well, that can't be a great sign. "He's not Patrick Ewing but he's not Patrick O'Bryant," Fran Fraschilla says. Somewhere members of the Golden State front office are cringing." -- Jeff Eisenberg 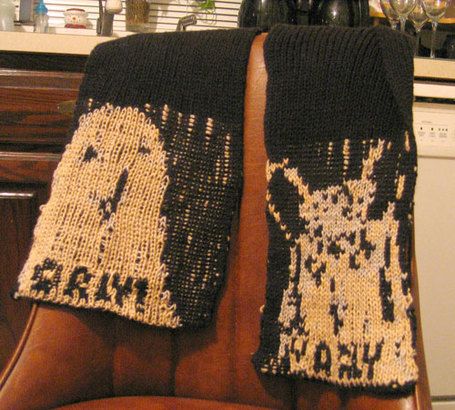 You dissin' on my boy Ryan, eh, Mr. Eisenberg? Well you clearly don't know what you're doing. Or at least he doesn't know a single iota of what happens in Switzerland. It also happens to be the home country of probably the greatest tennis player ever, Roger Federer, one of the richest nations in the world, and you know, just the primary source for the best and most precise watches the world has ever known. In short, that country manufactures robots and quite possibly, cyborgs.

You hear that, Jeff Eisenberg? Ryan Richards is a super-secret project by the British Secret Service sent to Switzerland to have his body parts replaced with steel and highly efficient gears in hopes of ending English futility in global sports! (not a replacement for James Bond, fool... Daniel Craig's already kicking arse!) I didn't want to reveal the secret but see what you've done! I will probably get shot a few minutes after posting this, but I will die peacefully knowing that Ryan Richards will save the Spurs franchise and that a young Dame Judi Dench is in a cryogenic state while her clone moves about claiming acting awards. 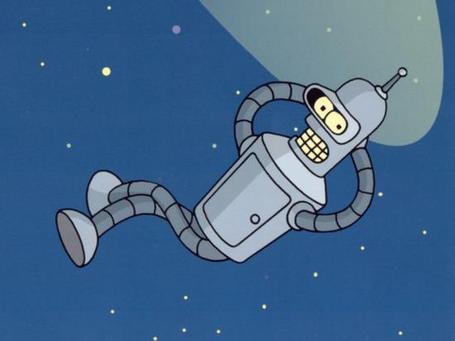 #4: Ryan Richards carries the hopes and dreams of an entire nation.

Yes, he is the Wayne Rooney and Andy Murray of pro basketball, not some dude named Joel Freeland who got drafted in 2006 but is ironically still imprisoned in Europe. If he doesn't pan out, it doesn't matter since England's used to losing a lot anyway. Zing.

Plus, what are the chances that The Queen herself flies all the way to San Antonio to catch Ryan play and win the NBA championship? How cool is that? 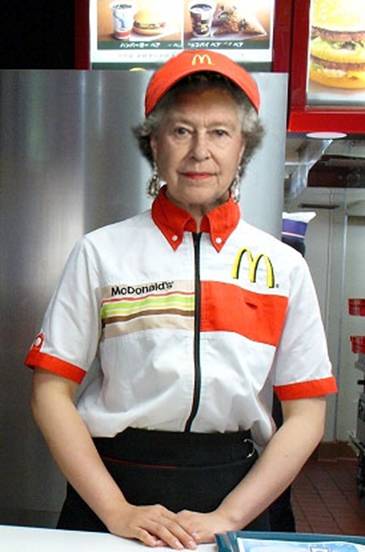 The Royal Queen in America? You bet.

I also can't imagine the potential (!) impact an English player on the squad will have on our lexicon. jollyrogerwilco will go nuts. I mean, a lot of people use "arse" and "crikey" already, but what about British words like "give it welly" (translation: try harder)? You can just hear Pop and Ryan having a shouting match in the heat of an intense garbage time game:

Ryan: But Coarch, I'm giving it me welly!

Other famous athletes who have 8.0 percent body fat: 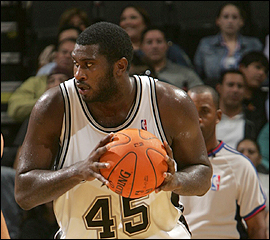 Which makes him uber fan friendly and a potential (there's that word again, momma!) Hollywood B-lister that can snag someone as crazy hot as ScarJo.

Unlike some incredibly hard to pronounce and supposedly better foreign players:

(author's note: Tibor Pleiss omitted for reasons that are too awesome) 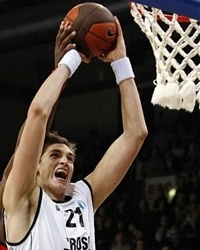 Tiago and Tibor would've been epic. Epic, I tell ya.

#7: Last but not the least, Ryan Richards is, as SLAM succintly puts it, an International Man of Mystery.

No intended Austin Powers reference there, but that's what makes him so intriguing. He played for a league that not a lot of people know, which could be a red flag but could also turn out to be one of the last bastions of basketball left untouched by team scouts and Draft Express.

He is also the unwilling victim of approximately 7,000 other Ryan Richards in the world after a quick Google search, which adds even more to his shroud of mystery. Think about it. What if a first-time fan googles Ryan's name and discovers that he is an astute wedding photographer? The drummer of a band with an awesome name? A club DJ? A professor with a PhD in Inorganic Chemistry? The possibilities for blackmail assuming different disguises are most excellent. I think I would like to hang out with him someday.

Richards likes to watch Dirk, Chris Bosh, Lamar Odom and... drumroll please... Rasheed Wallace! I mean, what's the over/under of Ryan Richards having some sort of crazy-mean streak like 'Sheed? What are the chances that he'll have a lowpost game as good as 'Sheed? What are the chances that, despite his skills on the low-block, he'll prefer to hang out at the three-point line like 'Sheed? What is the probability that he'll show up to Summer League camp terribly out of shape and then turn it on when the Spurs Summer League team reaches the Intergalactic Summer League Finals of the Universe? Oh my god I think I just peed in my pants thinking all about this potential. 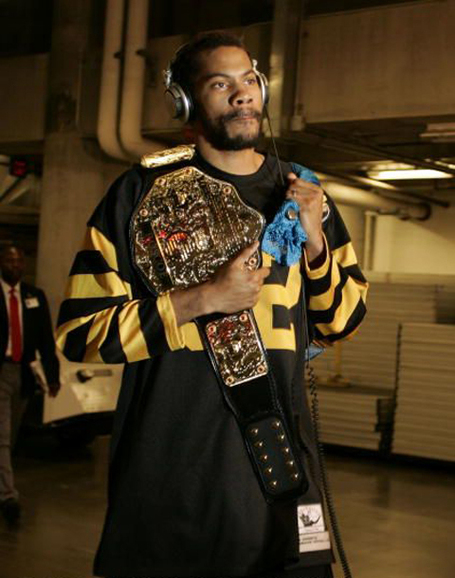 Even if he's out of the league, there will always be a need for 'Sheed. Retire In Peace, brotha.

There you have it. If you aren't convinced yet, then I'm not sure how else I can sell this pick. Maybe we should just get back to salivating over James Anderson or resume praying that Tiago finally comes over this summer.

For some actually informative links on Richards:

And now back to your regular offseason programming.