The 2010 NBA draft is 4 days away, and as we all know by now, the Spurs pick 20th. That is, they pick 20th if they don't move up, which some sources say they are aggressively attempting to do. 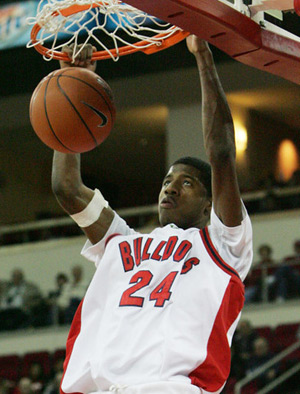 Please, Spurs, trade up and draft me. I don't wanna play for the Clippers.

Be sure to join us on Thursday for live coverage of the draft. Until then, let's talk about some of the names to be familiar with.

First, let's find out what some of the well known draft websites are saying. Heres a list of mock draft, and who they currently predict the Spurs to take. It might be a good idea to click these links often, since most will be updated daily up until Thursday.

Obviously, Damion James is a name that's coming up a lot. He's a rugged forward who played for the Longhorns (hook 'em!) this past season. According to his DX profile, James' pre-draft measurements show him at nearly 6'8" in shoes, though he's listed at 6'7". My main concern with him is not size, however - it's whether he can be comfortable playing SMALL forward. If he can, I am perfectly happy with him as our pick. The praise DX gives his defense make me feel all warm and fuzzy inside, and he seems to be a pretty efficient shooter(except for FT's - can you say "Spur material"?). The terms "aggressiveness", "physical toughness", and "intensity", all sit well with me, as we could use some more of that at the SF position. He also got great rebounding numbers(10.3/game) for the 'Horns last year, numbers that are excellent even if he was playing exclusively PF. I like the guy, and think that if he's around at #20, it's a no-brainer unless somebody else slips that far down. Still, I can't help thinking that these mocks are putting too much weight on the idea of drafting the "local" player... something the Spurs aren't really known for doing.

Elliot Williams is an intriguing entry on this list, since almost every mock has him being draft after #20. Also, there are rumors that he might have received a promise from the Spurs(which, no doubt, is why nbadraft.net has us taking him). At first glance, the Spurs seem to have the greatest need at small forward in this draft, seeing as how our ONLY player with the right size and speed to play the position will be in his final contract year, and even has the opportunity to opt out of that final year if he wants to. Williams is definitely not a SF - he's a shooting guard all the way, and might even be able to play the point a bit(if he has a passing SG like Manu out there with him). If the Spurs draft Williams, it could be seen as a vote of no confidence in Malik Hairston and Alonzo Gee. That wouldn't be surprising, especially since Williams doesn't seem to address the team's outside shooting woes as well as some of the other players projected to be available when the 20th pick comes around.

James Anderson is a guy that CapHill could probably tell you more about than I could, since she's the biggest Okie State fan around these parts. I'm really going by stats, internet scouting reports and a few short clips I found. Anyway, Anderson is kind of a tweener who played both wing postions, though he's probably best suited by sticking to SG in the NBA. His situation is sort of the opposite of Williams, in that most mocks project him to go before the Spurs pick(although DX, the "industry standard", weirdly has him dropping all the way to 30th). Anderson's actually a very efficient player(second best points per possession figure in the NCAA last year, according to DX), and specifically a very good shooter. This is hard to do when you're the team's best player, and opposing defenses are geared primarily towards stopping you. I'd be absolutely fine with this pick, if he's available at #20.

Here's some other guys that are projected to be picked near the #20:

Hassan Whiteside - This guy is an absolutely incredible shot blocker, and pretty good jump shooter. He doesn't really have any post game, and he's as skinny as a flagpole. Still, with a 7'7" wingspan, and low foul rate(*coughYawncough *), he's got crazy defensive potential. Most mocks have him gone by 20, but if he's still there, I'd be all for drafting him. The Spurs haven't worked him out, so color me doubtful on whether they would take him on as a project.

Daniel Orton - A 6'10" center who only played 13 minutes per game for Kentucky last year, Orton's sort of an enigma. His per 40 minute numbers don't jump out at me either, although his blocks per 40 are above average. I'm skeptical of this one.

Larry Sanders - Another 6'10" big man, Sanders is more suited to PF than C. There's nothing really spectacular about him, but he's improved his game quite a bit in his 3 years at VCU, especially his efficiency on offense and rebounding. If he keeps improving, he could become quite a player, but I doubt the Spurs would want to wait for the highest pick they've had since 1997 to develop into a player.

Kevin Seraphin - A "French"(He's actually from French Guyana) big man who doesn't get a lot of playing time, but has good per-40 minute statistics. His achilles heel seems to be fouls, which are usually not called as often in Europe. So basically a 6'9" version of Ian Mahinmi. I'd rather keep the original, thanks.

Solomon Alabi - 7'1" in shoes, Alabi has been labelled slow and unathletic due to measurements taken at the recent draft combine. His agent said that his foot was injured and needed surgery, so those measurements might have been off. As a part-time FSU fan, I'm extremely biased here, and would love to see him succeed with the Spurs. However, the last time the Spurs had an FSU player, it was [I think] Charlie Ward. UGH.

Eric Bledsoe - Although he's naturally a point guard, Bledsoe played on the same team as John Wall last year, so he mostly played off-guard. But that didn't keep him from turning the ball over 3 times per game. Decent 3-point shooter, but we already have a guy that shoots threes well at this position. I definitely do not endorse this pick.

The following guys are projected either much sooner or more than a few picks later than #20, but are worth mentioning IMO.

Stanley Robinson(SF) - Great physical capabilities, and has the potential to be a lockdown defender. I was once in love with Robinson being the Spurs' pick, but have read some disturbing things about his basketball IQ. Also, his physical gifts aren't as great as they once looked, since actual measurements were taken at the combine.

Paul George(SG/SF) - This is the guy I really covet now. DX has him going to the Clips at #8, but most other mocks have him 12th or Later. Memphis picks 12th, and they have three first-round picks this year, so they might just be willing to make a trade. Great size(6'9"), great athleticism, and he has a really sweet stroke on his shot. He's the total package to succeed as a Spur, really... although he might want to stop shooting 91%(!) on free throws if he wants us to draft him.

Luke Babbit(SF) - Even if George is gone, I would still make a reasonable trade to move up and nab this guy. He's not a good defender, but holy crap can he score. He scores in iso plays, transition, spot up 3s, jumpers coming off of screens, hard pick and rolls to the rim, you name it. He's an underrated athlete, and maybe working for Pop will even improve his defense. This would be an excellent option to go to for points off the bench.

Gordon Hayward(SF) - Everyone who watched the NCAA tournament knows that Hayward came within one miss of leading Butler, of all schools, to a national championship. He reminds me a bit of Mike Dunleavy, Jr... which isn't bad, but I don't think I'd trade anything of value to get him.

Epke Udoh(C) - At 6'10", Udoh acts the part of a 7-footer very well. Excellent shot blocker and defender, which are obviously skills the Spurs would find useful. However, he has some pretty low efficiency numbers for a center, and the NBA is even less forgiving. I wouldn't mind trading up for him, as long as we don't give up any important pieces of our team to do so.

Xavier Henry(SG/SF) - Excellent jump shooter, smart player, has good fundamentals and efficiency stats. Henry has everything it takes to be a successful role player in the NBA, especially for a team like the Spurs. DX says that he's one dimensional, but Henry seems to know his limitations and play within them - an attribute Pop loves. We'd probably have to trade up to get him, but I could see the Spurs coveting what he brings to the game.

Avery Bradley(SG) - As a Longhorns fan, I hate to say this. But, there's absolutely no need for Bradley's skill set(defending guards) on a team with George Hill. So, no thanks.

Anyway, these are just the names that stand out to me, and seem to appear in the most rumors. I also didn't say anything about the Spurs second round pick at #49. Personally, I think they'll draft-and-stash a player in Europe with that pick, or trade it.

So, that's what I've got. I realize that I didn't include a lot of players in this list, but that's what the comments section is for. What do you think the Spurs should do, and who would realistically make the most impact? And feel free to make suggestions for the #49 pick as well. Fire away, I've got a Kevlar vest and I'm not afraid to use it.