Share All sharing options for: From 4 Down to SLOB's and BLOB's -- It Aint Easy Being a Spur 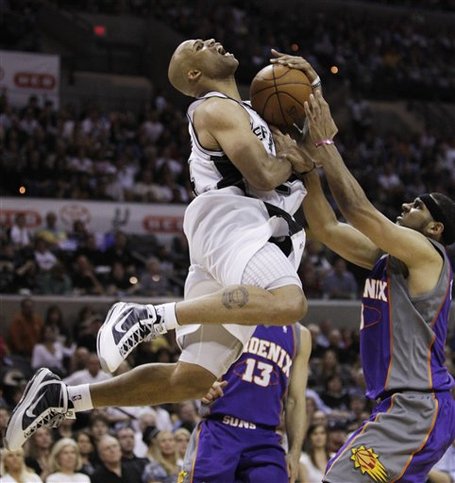 I feel sorry for Richard Jefferson. As strange as it sounds, I feel sorry for the guy. Don't get me wrong, I was with you, fellow Spurs fans, asking for his head on a pike previously. But maybe I was too quick to judge him. Maybe we all were.

Over these past few weeks that the Spurs have been fishing or hanging out with Scottie Pippin, visiting Austria, going to UFC fights, or birthing twins, I have been studying my Spurs on a more analytical position than ever before. Previously, I've brought you stories where I break down plays or certain defenses. But now, I believe I have complete knowledge of the Spurs offensive scheme (barring any drastic changes that may be made to plays in the off season (unlikely)). Now, you couldn't get me on a court and expect me to play exactly like a Spur would because I have no talent and I would look like an idiot.

The Spurs offense is obviously based around Tim Duncan, Manu Ginobili, and Tony Parker -- in that order. You may be thinking that because the Spurs offensive scheme is extremely reliant on the "big three", that they are the most important players on the court. While this is true on a scoring standpoint (you've gotta score to win right?), the other players on the court are just as, if not equally, as important. I'll give you an example:

If you have watched the Spurs any time since Tim Duncan was drafted, you've seen this play so many times that you've probably got it scarred in your head. For those who don't know it, the play calls for the 4 player (Duncan) to get the ball in the post and for him to try and score (or if not possible, pass to an open team mate and start over). The visual cue is a hand with 4 fingers waving down. 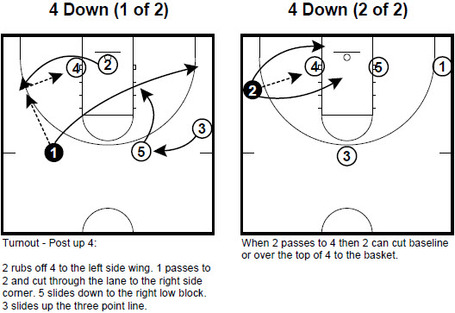 Seems easy enough, right? How could a player have a hard time with this play? It gets complicated for new players when you add "audibles" to the original plays. For example, there are many, many variations of 4 Down like 4 Down Lift, 4 Down Chicago, etc. etc. The plays may be similar, but there are slight variations that change the potential outcome and the ability to both understand and apply the concept of the play on the court is essential.

That's just 4 Down, though. The Spurs have an encyclopedia of plays that can be called at any time, and if you don't know what you're doing you're going to look like a fool (see: Richard Jefferson).

Often times, RJ would look out of the play and effortless. The truth is, he probably was out of the play in a way. In order to really fit with the Spurs you have to be able to not only execute the plays, you must be able to improvise instantaneously and convert the opportunity. To explain what I mean, watch the following play:

In this play, RJ and the rest of the team run the play fine, but TD gets tangled up by three Suns defenders. Seeing this, RJ slides over to the middle, gets the pass from TD and draws the foul. I don't honestly believe RJ would have done the same thing at the beginning of the season. He simply did not have the confidence in the system to call his own audibles. His free throw attempts per game (which was 3.5 FTA per game) reflects this lack of confidence.

RJ's offense in the past has been either to get the fast break opportunity or to post up. The Spurs have asked him to do something entirely different, which is to be a spot-up shooter and play runner. Think about it...he's gone through his entire career with plays run for him and broken garbage plays (fast breaks), and now all of the sudden he has to run 4 Down, 1-5 Loop, Corner, and the like?

The Spurs offense is technical and demanding and the defensive schemes aren't a walk in the park either. It takes a skilled player to be productive in the system. Richard Jefferson is skilled in a way that would be productive in a system like the Nicks, Golden State, or any 7 seconds or less scheme. But don't be discouraged, the video I shared with you inspired me writing this. Richard really showed improvement and understanding of the system in the last half of the season. Do not expect huge trades or a bombshell signing this off season. Expect a smart, well thought out move by the Spurs FO. With expiring contracts of Roger Mason Jr. (gone), Matt Bonner (stays), Ian Mahinmi (gone), Keith Bogans (gone), Garrett Temple (stays), we have room to get another shooter (or defender) out on the court to help us in the 2010-2011 season.