Share All sharing options for: Tuesday DTOUR: Tiago the champ?

A week ago, the conventional wisdom had it that Tiago Splitter and Caja Laboral might be facing an elimination game today. Well, it's an elimination game, all right. Only, if Caja wins today, they are the ACB champs. This occasion calls for a vuvuzela parade.

What's that? They have to win the game first? Oh, right. Let's get on with it, then.

Now, I'm all for Tiago winning a 'chip, but I was hoping he'd help the Spurs win one too. If Caja wins and Splitter plays well, you'd better believe he's going to get some big offers this offseason. But "big" in the European leagues isn't much bigger than what we can offer him. Let's just hope the promise of future earnings potential in the NBA is enough of a lure.

That first game is a yawner, and not just because of the early start time. Ronaldo vs. Drogba(is he playing?) should be interesting. As for that third game, North Korea is probably going to start shit with their neighbors again after the embarassment their team is going to suffer.

Even though I mostly despise them, it would be lovely if Boston could just end this thing tonight. Considering the alternative, that really is the best possible outcome. Pathetic though it might be, watching the Lakers go down in flames is the one thing we have left to cling to from this NBA season. 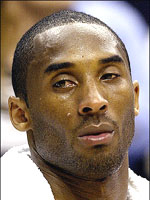 And since this is a DTOUR, feel free to talk about anything. Except maybe that rash - you can keep that to yourself.