Share All sharing options for: DTOUR: It's World Cup Time!

I'm baaaack! Didya miss me? No. Well, I'm going to make you read my ramblings anyway. After weeks of working waaaay too many hours and not drinking (or sleeping) enough, my schedule has finally backed off enough for me to start perusing the sports blogs again. Other than following the strangely mesmerizing game of Red Rover currently being played by the college football power conferences, I haven't been able to keep up with any sports - I didn't even see a single match of the French Open! For a sports fanatic like me, that's unacceptable. However, this being the annual lull in the sportsverse (excepting baseball, which just ain't gonna cut it), I become morose, thinking I was just going to have to gut it out until football starts. But there's another form of football, what we Americans in our infinite wisdom call "soccer", and it has a fairly big tournament coming up. All hail the sports gods! I will have something to watch over the next month after all!

Sidebar: One of the employees at my company is from SoCal. Although in all other respects she is a lovely person, her LAness shows itself in her choice of sports teams: Dodgers, USC (hello, banhammer!), and the hated Lakers. Today she told me her favorite player is Derek Fisher. I thought it unfortunate that I did not have the power to immediately dock her pay.

I know the basic rules of futbol, but I don't follow it. I couldn't tell you which team is the best, which might be a sleeper, and which player(s) is king. However, I have chosen a team to follow in the World Cup (besides the US team - it's mandatory that we Americans bring our national pride to the forefront, much like the Olympics). So without much ado, I give you this: 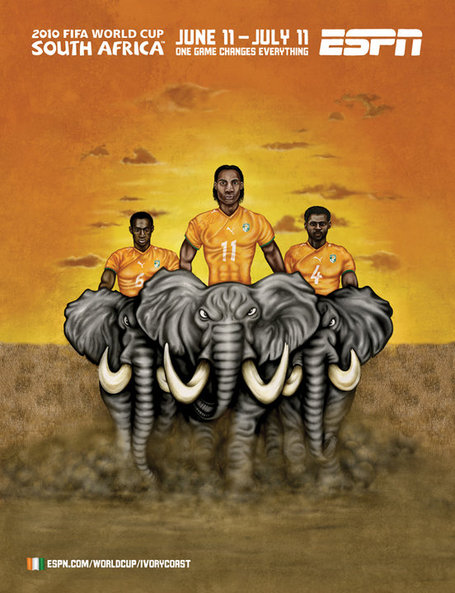 Since the event is being held in South Africa this year, I thought I should root for an African team. In my extensive research (one article), the Ivory Coast is led by Didier Drogba, one of the best strikers in the world with a seriously awesome name. Apparently, he broke his arm, but he might still be able to play. Irregardless (hi Q), the above is quite possibly the coolest sports poster I've ever seen, so GO ELEPHANTS GO!

Since I'm assuming we have many interested PtRers, feel free to use this thread to discuss the World Cup or anything else (this is a DTOUR). And one more thought before I bid adieu: PAC-11, Baby! Woot!