Share All sharing options for: ACB Finals: Splitter vs. Juggernaut

If you were thinking of Juggernaut from X-men, you'd be wrong. The Juggernaut in this case is a team led by a gnat: 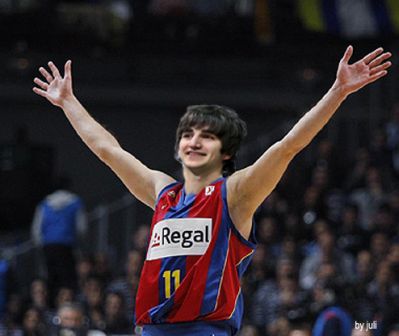 Prepare for lots of this guy.

It's time for the ACB Finals, where our favorite PtR stalkee Brazilian's team is set to take on a rather large challenge. Again, not literally, but you get the point.

Tiago's Caja Laboral team had to scratch and claw their way to a semifinal victory over Madrid, but they finally pulled it off in the deciding game 5. Madrid was a very good, but flawed, team - their perimeter players are pretty crappy by European standards. This was to Caja's advantage, but that advantage will now be gone.

Splitter and gang are now in the Finals, and the league MVP is going to need approximately 3 metric tons of help from his teammates if they're to have any chance of winning a league championship. Teletović needs to hit his 3-point shots, and the same goes for Huertas. They're also going to need some offense out of Walter Herrmann, who doesn't seem like nearly the player he was a few years ago. In fact, now's a good time to talk about how Caja plays. Have you ever watched the Orlando Magic offense? Replace Dwight Howard with Tiago, and you've basically got Tau's offense. They live and die by Tiago's post offense and the 3 ball, nothing else. Too bad they're running into the ACB equivalent of the Celtics.

Caja's opponent is the nearly unbeatable Regal Barcelona. How good are they? Well, their combined record in Euroleague(20-2, won the league title) and ACB(31-3) play was 51-5. That's fifty-one and five. I don't think I have to tell you how atrociously good that is. Barca is also the defending ACB champions, and they [obviously] have the home court advantage in this series. They have an excellent shot-blocker and defensive big man in Fran Vasquez, whom(ironically) the Magic drafted in 2005 and mysteriously never bothered to sign. And then there's Spanish National team standout Juan Carlos Navarro, the team's leading scorer and an absolute terror at the SG position. And their point guard is some guy named Ricky Rubio. They also have excellent options off the bench, and no real holes on their roster. This team is f5g stacked.

Much like the semifinal round, the finals are a best of five series. The first two games will be played in Barcelona, the third and fourth* games in Vitoria(home city of Caja Laboral), with the fifth* game back in Barcelona.

By the way, if Caja gets humiliated, it probably improves the chances that Tiago will wear the silver and black next year. Despite that, I'm rooting for the guy. Rubio seems like an egotistical tool, which I base on absolutely nothing except for the fact that he's being treated like nature's gift to European hoops - therefore, I'd like to see him and his team taken down a notch. Also, rumor is that Tiago's agent is already talking to the Spurs' brass... they had damn well better be in touch.

Anyway, if you have time during the day, check out the game and talk about it here. Even if you can't watch it live, the replay will available at the link in the top of this post shortly after the game finishes. And it's free... you hear me, Stern? FREE!!!!!