I don't know what to say.

I considered going all Gregg Popovich on you, you know, telling you that you're grown men and women and you don't need me reminding you that no one's ever come from being down 0-3 to win a playoff series, and obviously a good strategy would consist of winning this game and the next 3 as well, and could someone ask a real question for a change?

I considered going zen. Simple calm serenity in the face of chaos and confusion. What is winning? What is losing? What is the sound of a baseline jumper left short? (I can tell you the answer to that one, actually, it sounds like this: clank.)

But in the end I've decided on something else.

I love this team. I'll keep loving this team even if they lose. I also know that no dynasty lasts forever. I know there will be a period of rebuilding when we aren't considered serious contenders for a championship. It happens without exception to every great team.

But not yet. Please.

I don't want it to be over. I so desperately want to see Tim get his fifth ring (before Shaq, before Kobe, oh please, before them). Man I want that so much. I want to see Manu and Tony and Tim share one last title and give the younger players a taste for victory; a foundation to build on. I want to see the streamers falling and the banners flying and all the little kids in their number 20 jerseys screaming for joy. I want to see the look of relief on Pop's face (and you know there would be one) when he knows he has done everything he can to help secure Duncan's legacy--Tim, who is like a cherished son to him. And I want these things not because it would make me happy or prove that I'm somehow an awesome person because I like the Spurs (although, let's be honest--it kind of does), but because I just . . . love these guys. I want to see them win. They've given their best to this game and to this team. It is right and meet and just that they be rewarded.

And I know it isn't likely to happen. I know. But that doesn't stop me from wanting it.

More importantly, that doesn't stop the Spurs from wanting it.

One step at a time. Win this game and avoid the sweep. Then go from there. 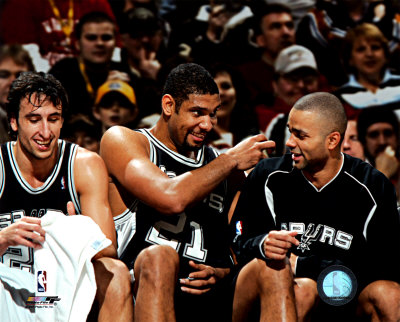 Someone has to do it someday, you know--be the first team to come back from being down by three losses and win a playoff series. Why not us?

Apologies for the hackishness of what ensues. I have the usual excuses lined up (need to sleep, going out of town to visit mom on mom day, etc.) but really, even if I had all the time in the world, I feel like everything's been said and all we can do now is watch and hope for the best while preparing for the worst.