Game 3 Recap: Being on the Bad Side of Redemption

Share All sharing options for: Game 3 Recap: Being on the Bad Side of Redemption 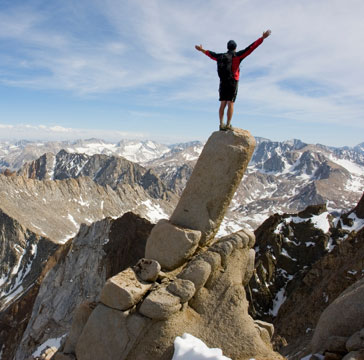 Tough loss and all that. So, how does it feel to be THE Mountain that was finally conquered?

Right after the game, I called my brother in the other room to have lunch. As he walked behind me, he had a huge smile on his face and said the words, "blowout". The only thing that I could say was, "Yeah. 3-0 now." I pulled up my chair and began eating in silence while he put the tv on some boxing match.

The loss was depressing. I didn't feel like finishing my food, but thankfully I was able to. My brother and I discussed a few things about the game, particularly how Amare never had to play the entire 4th. I had a lot of other thoughts swimming in my head when he was talking, so practically a lot of what he said went in one ear and then flew right by and out the other. After I was done eating, I stood up, shuffled away from the dining table and went upstairs without speaking another word.

As I was heading up, I stared down at my brother who was still eating and I couldn't believe what I just did -- not even letting him finish his food before I left the table or excusing myself when I stood up. In our family, that was considered a bit disrespectful, but it was more of an emotional reaction on my part after such a tough loss. I'm not used to it. We're not used to it.

A Very Short Summary of the Game

I wouldn't blame you if you skipped this part, or the next.

The Spurs played one hell of a quarter to start the game and limited the Suns to 19 points. We would then up that to as much as 16 or 18 in the second before the proverbial RQC. You knew it was coming. It was just how the Spurs have been wired during the entire season - build a big lead, squander it away and then anything goes from there.

The Suns continued chipping away at the lead in the 2nd half, while the Spurs continued to miss their free throws, miss rotations and fall in love with jumpers, as they've been wont to do the entire season. And in the 4th quarter, Goran Dragic happened. His scoring display was simply remarkable. Too remarkable, in fact, that he handled the entire Spurs starting lineup by himself and made every Spur look like he's walking underwater. Ballgame.

Majority of Spurs fans thought this was going to be one of those classic Spurs-breaking-Suns'-hearts series, while a few showed real fear and respect for the evolution of this Suns team. Count me in the latter group. I'm not jumping on the Suns bandwagon, but I decided to keep mum about the trouble Phoenix caused the Spurs in terms of matchups because like everyone else, I believe in my team and that being a pessimist won't help the cause. That's what fandom is for, right? I mean, even without Manu last year, a lot of us still picked the Spurs to win against Dallas.

But enough about the Spurs, at least for this part. The Suns dominated our team. We tried every which way to stop them. Pop tried switching and it didn't work out. It never worked during the game. And in his classic stubbornness we've grown accustomed to, Pop kept trying and trying that tactic -- pound that rock, just pound that rock, he might've said. But we can't continue to chip away successfully if the hammer has been broken. The team isn't equipped to continually switch on defense, and not deep enough to be able to compete with the Suns' scrappy role players.

There are a lot of things that can be pointed out, but the biggest keys to the Suns' marked improvement lie in two things: coaching and bench play. Alvin Gentry has done a great job. ESPN showed those "wired" segments when they mike up the coach and you can see Gentry's confidence in his team. He's incredibly calm and patient (a complete opposite of the whiny, woe-is-me demeanor of Mike D'Antoni), which has led to improved play from his bench guys. They go out there knowing they can play freely and without fear of getting pulled out if they make one stupid mistake. Gentry trusted his guys and he just made Steve Kerr look like a genius. In return, Dragic, Frye, Dudley and Barbosa made Gentry look like an all-world coach.

At the start of the season, everyone was talking about how the Spurs made a steal of getting Jefferson for the expiring contract poo-poo platter of Bowen,Oberto and Thomas. Well, as we've discovered throughout the course of the season, it's RJ who's been stealing from the Spurs.

My first thought when writing this was that Richard serves as our barometer during a game but then I realized, he's been the barometer of this entire season. Not in a "where he goes, the Spurs go" kind of thing, but more the personification of our 2009-2010 San Antonio Spurs. Sometimes he's brilliant, most of the time, he's just not quite sure of himself. Is this Spurs team supposed to defend like our championship teams in the past? We saw glimpses of it in some games, but we just couldn't reach that level of locking down people consistently. Is this decidedly more athletic and younger Spurs team supposed to score more and push the pace exponentially more than those previous Popovich teams? Yes, to a certain extent. We averaged more than 100 points during the season, but as we've seen throughout the playoffs, we can't knock down threes consistently or always dominate the glass for us to be able to run. In fact, most times we stuck to the usual Spurs-style grind it out half-court game with mixed results.

So yes, the big acquisition is what essentially characterized our season. RJ tried hard to fit in, was humble about everything, fought off constant putdowns and played his ass off more as a Spur than he has ever done I think in his whole career. The Spurs re-tooled and tried their best to integrate everyone, struggled throughout the regular season but continued working, shrugged off the numerous "they're done" statements thrown at them, and played like a champion in the first round.

Well... all that and it just hasn't been enough, particularly against these determined Suns. A really, really determined Phoenix team, if I may emphasize. Richard, for all his faults and shortcomings as a Spur, tried and tried to fit in but in reality, he never did slip comfortably into the team's fabric. It felt like buying underwear a size or two smaller.

And Now, The Part Where I'm Supposed To Rally The Troops

Sadly, I don't have anything inspiring to say. The roles have been reversed. The Suns are almost up top of Mount San Antonio, while the Spurs have been left behind, staring at a near-impossible to climb mountain of odds. Sure there are exceptions, and maybe as LatinD said, we CAN make history. But every game that's been played in this series, San Antonio continues to be the team left wanting after the endgame buzzer sounded. If this amounts to calling the season even before it's over, then let the ban hammer fall where it may.

I'm tempted to talk about the future but now is probably not the time. I can assure you one thing though. The Spurs competed every step of the way and while Game 4 may be our last, they will continue to play their hearts out. So for the sake of our team, I hope a lot of us will still be able to make the game/game thread and cheer them on. I know we're a spoiled fan base because of the four championships but that doesn't give anyone any right to abandon this team when the times aren't rolling.

Now, let's go out there on Saturday and continue to be that proverbial Spurs' 6th man. Respect the Suns for what they've done so far, but don't forget the team that has brought us here together. They took us to probably the most turbulent, unpredictable roller coaster ride of a season that we've ever been on, and even though this downhill series makes us want to throw up and jump off the train, let's finish it out -- for the Big Three, for Gregg Popovich, for the front office, for Peter Holt and for ourselves.

After all, the Spurs, 0-3 and ripe for the taking, are still alive, and I say that when there's life, there's still hope --- even if just a flicker of it.