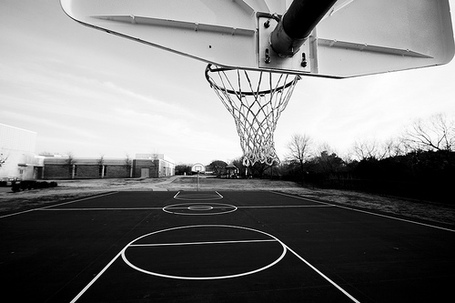 There's no Santa. You can't fly. You won't always get what you want. Your parents are the tooth fairy. You will have to work for decades and by the time you retire you'll be too old to wakeboard. There may be no tomorrow. Depressed yet?

No? Then here we go: the Spurs are losing their series against the Suns 0-3. In the history of the NBA, no team has ever come back from such a deficit. Giving up seems logical, even humane. Building your wrecked Spurs identity piece by piece only for the Suns to smash it again would hurt, hurt again, hurt for no good reason. "Masochism" is the word of the day.

And yet I'm one of those fans that can't enter a game without hope. When the debate as to what sort of attitude supporters of a team in a hopeless situation ought to adopt, I'll choose denial and supreme confidence every time. I truly believe that realism is an offseason tool - a viewing glass that brings your team into the sharp contrast you need to escape the blurriness of fandom and find the flaws in your system, the chink in the armor.

It's not the offseason yet.

My Way Isn't Your Way

I'm not trying to call out the fans that have already given up on the Spurs. What works for me might not work for you. Realists have the benefit of being right - most of the time. A healthy distance from harsh realities is conducive to a long life. Look both sides before you cross the street, brush your teeth, and watch your weight.

We have three players who can't do anything but give their all every game. One of them, Tony Parker, is likely to be sidelined by the umpteenth injury we've had to deal with this season. Of the other two, Manu Ginobili has a larger-than-life nose broken in two parts, and Tim Duncan is older than Methuselah. How can you not root for them? How can you not believe, even if only a little, deep down, beneath all the caustic remarks and the sarcasm and the fatalism? Two, maybe three, all-time players want to win this with all their heart. Is it so impossible?

Of Bells and Outliers

Say there are no outside factors such as a common history, weak psyches or untested mettles. Or say they exist, and are contained by the problem at hand. Allow me to introduce a good-old Gauss bell:

That bell is one of the most common elements in statistics and probability theory. It's used to describe variables that cluster around the mean, and can describe anything from shoe sizes to IQ, weight and height, and even the life of a light bulb. I might be speaking out of my derrière when I claim that it might be useful to describe the result of an NBA playoffs series, but Pounding the Rock isn't the place for hard facts. In any case, every probability function is based on the same principles: a) the further you are from the mean, the least likely an event is to happen, and b) the probability of any given result might be very small, but it's never zero.

History has proven the probability of a 0-3 comeback is very small. There have been 89 such 0-3 instances through the decades, and it's never happened. I'm ready to admit the smart money is on the Suns, and probably even the dumb money. However, the probability isn't zero, and until it is, I don't want to give up on my team.

I can assure you that most if not all of those 89 teams that couldn't come back didn't have Tim Duncan, they didn't have Manu Ginobili. The Spurs played some of their best basketball of the season without Tony Parker and facing poor odds, the danger of missing the playoffs altogether never far from their minds. As disheartening as three straight losses has been for us,every little disappointment we are forced to endure now will make victory that much sweeter, be it Sunday or next season. That's the beauty of sports.

Outliers are extreme deviations from the mean, statistical anomalies. For those of you who know me, I'm a dam engineer. Now, spillways are structures used to alleviate reservoirs during peak flows, and thus protect the dam itself. Considering how destructive a ruptured dam can be, spillways are nowadays designed to allow passage of a flow likely to occur once in 10.000 years. Yep, that's right, once in 10.000 freaking years. And you know what? It's happened. Some poor engineer woke up one day and found out that the flow coming through the river was the one that occurred once in 10.001 years. Bad day for him. And many others.