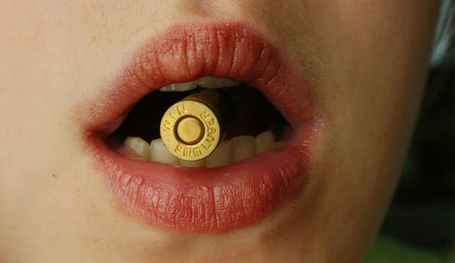 Okay. Basically, the Spurs are now in a bit of a hole.

Not a big, unsurmountable hole, mind you. The core of this team is as veteran as you can get: our Spurs have been there, have done that, done it again, and got the rings to prove it. They can certainly climb out of this hole; hell, I think they can bury the effing hole in defense and clutch plays and role players stepping up and the cheers of our home crowd... ...Okay, that analogy got away from me.

My point is, in both losses, the Spurs weren't outplayed - they stayed with the Suns though 3 and a half quarters, dropped their defensive intensity during key stretches, fell behind by 10 points and then managed a late mini-run that teased us into despair. You get the feeling that they are some adjustments away from finding the formula that will put these Suns to the ground - the potential for greatness is there. So far, of course, it's unrealized potential.

Some people say we're at the nadir of the season; those people would be right, if you consider numerical closeness to The End to be the only parameter. I like to think of this as an opportunity. Much like the games at Detroit in the 2005 Finals, these two losses can be the prelude to a historic comeback, the start of yet another exclamation mark in the one-sided Spurs-Suns would-be-rivalry.

Winning is Better Than Losing

Let's get this out of the way: we all wish we were winning. Winning feels good. As if your every opinion and the often illogical belief in your team of choice's chances of winning were suddenly vindicated by reality. There's nothing simpler than being the fan of a winning team - all the bragging right and none of the gut-wrenching pain.

I'm a particularly bad loser. Every time we lose I feel physically ill, a surge of anger that makes me yell at my poor dog (who doesn't bother waking up) and gets stuck somewhere along my upper chest. This feeling is only exacerbated by the playoffs, too. A losing playoffs series is an emotional marathon that tests my faith in sports fandom in general - is it all worth it?

And then the emotional ebb stops, and the Spurs start to win, my spirit soars and I remember what it was all about. I always think that a true fan would be beyond doubts like that; nothing but the confidence to sneer at the scary moments and the wit the shoot down naysayers whose faith wavers.

Then I realize SiMA is like that and I wonder at the benefits of such a posture.

There are always fingers to point in a loss. I'll use my index to indicate the bench, or lack thereof. Where is Bonner's timely sharpshooting? Where's Blair's beyond-his-age savvy? Where are the bench triples, the hustle, the extras? Meanwhile, Dudley and Frye are as good as advertised, and abused Blair and Bonner at the hoop and beyond the arc, respectively.

I'll be the first to point out that bashing a player and the minutes given to him breeds negativity, and it tacitly implies that you consider yourself superior to the coaching staff in all things basketball. I ragged on Fred during the season when he bashed Bonner, and paid no mind to the exaggerations regarding his lack of aplomb for the playoffs. Surely that was last season, right, and this was a new season, and he was consistent through a stretch of games... Well, it's the playoffs now, and Matt Bonner refuses to prove his enemies wrong. His importance to the Spurs is not proportional to his skill level, and the thought of Tiago Splitter waiting on the wings offers no consolation.

Are there any options? Well, there's Blair, whose foul-prone wrecking-ball self did an acceptable job of guarding Apostrophe. And yet when he was on the court last night the Suns grabbed offensive rebound after offensive rebound ad nauseum. There's Yawn, but really there's not. And there's also the infamous small ball, so often vilified by the PTR faithful.

Why not, guys? If there's a team against which the height difference isn't significant enough, it's the Suns. It worked in spurts during game 1, and it has worked historically. Now, I was always proud of how the Spurs beat those 7SoL Suns teams at their own game. We ran with the best and triumphed. And nowadays we have Richard Jefferson and George Hill, speed demons of their own right. If you can't impose your own pace, why not embrace theirs and use your knack for defense to stiffle just one more play than them, two more?

Regardless of half-baked theories, we were never able to impose out defensive identity in the second half of the fourth quarter. Tim Duncan's three-pointer as the game wound down was a reminder of a grander day, but the home crowd was never worried. Timmy played a great game, all in all, and got us to a good start with hooks and short jumpers that found nothing but net. It took him 6 or 7 shots to finally miss one, but the Spurs hadn't managed to pull away while he had the hot hand. It wasn't his fault.

I will use my middle finger to point at Manu Ginobili. On a night when Rage played one of his best games in black, silver and white, Manu's shot was AWOL. Let's be honest: Manu hasn't been the same since the Teutonic Elbow. He battles, he hustles, he does smart things because he's Manu Ginobili, but something has been shaken. His jumpers clanked, and he was doubled, but he was still able to make a positive impact with his passes, good for 11 assists.

My ring finger will be aimed at the entire team. We are settling for jumpers, we aren't boxing out, we aren't staying on the shooters. The Nash/Apostrophe pick and roll is deadly, but that's no excuse to let them take open threes. They are used to that game - they would take triples even if double teamed by a pair of 10 feet tall octopuses. They have exactly one and a half players that like to bang inside, and we have an all-time defensive center. As well as RJ played, I remember him taking a long two while PTR exploded with "DRIVE!" requests - and then I remember him closing on a seemingly languid Nash and leaving Frye (Frye?) open for the dagger. We need to look for the whistles at home. [You may now TWSS this entire paragraph.]

My entire fist will be shaken at the referees, and Joey Crawford. That's behind us now, and good riddance.

I might miss part or the entirety of game 3: Santiago Feliú, a Cuban songwriter/singer that I like, is coming to Buenos Aires for the first time in almost a decade. I bought my tickets before I knew what the Spurs' schedule would be, and while I'm trying to change them I doubt I'll be able to. The thing is, if I miss the game and we win, should I join game 4's game thread?

Definitely not. That's mojo for you.

I say we use the energy of the home crowd to win games 3 and 4, thanks to the return of our three point shooting, Blair's beastly putbacks and countless layups. I say we go back to Phoenix 2-2 and the perennial runner-ups feel the pressure of history. I say this goes to 7 games, and we continue our in crescendo development into the team to beat.

I say these Spurs will make history.