Share All sharing options for: Know Your Enemy: Phornyx Stars 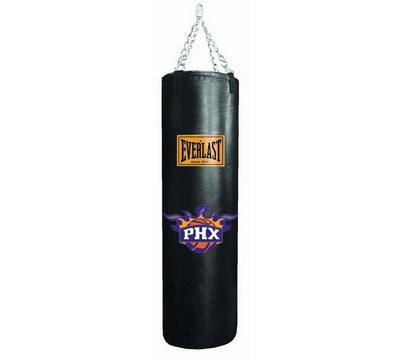 Come around, children. It's time for another film session with yours truly. This time it's the Suns (aka the Spurs punching bag).

OK, so that intro wasn't very creative, but who cares, neither is the Suns offense.

Same thing here, only Richardson gets the pass this time. He gets a second pick up near the three point line, drives to the hoop and misses the shot thanks to Timmeh's long arms.

I'm doing something a little different with the following play. I've actually diagrammed the charts so that you can see it from an X's and O's (or circles and triangles, in this case) standpoint.

The play starts with Nash (1) at the top of the three point line. 'A'm'a'r'e (4) sets a pick for Richardson (2). 2 curls around the pick set by 4 and runs across the floor to the opposite corner. When 2 passes Collins (5), 5 slides down to the board. At the same time, 4 sets a pick for 1, and 1 dribbles around the pick to the bend in the three point line. What is crucial here is that when 4 sets his pick for 1, 4's defender Dice (Δ4) switches onto 1, Duncan (Δ5) switches to guard 4, and after getting around the pick, Parker (Δ1) slides down to help Δ5 defend against 4. If you're still following me, that means 2 is left wide open in the corner. Crap! Well, with Δ4 using his arms and body to create a wall where 1 has a hard time seeing the court. Once Δ1 notices the switch, he runs to guard 2 in the corner, isolating 1 and Δ4 at the three point line, and Δ5 guarding 4 in the low post. 1 cannot feed the ball down low to 4 because Δ5 fronts his man, denying him of the ball. 1 is left to shoot the ball, hoping 4 or 5 picks up the rebound if it doesn't go in. Needless to say, it doesn't go in, and Superman Manu is there to trap 5 under the rim (causing him to travel which wasn't called) and call a time out.

Coach Pop said after the game that the best way to beat Nash and the Suns is to confuse them by using different defenses.

Δ. Players wait for their players to come to half court.

3. 4 sets a pick for 1, sees the defense leave him open and dives towards the basket. 1 dribbles back towards the middle of the court around the pick. 5 is still getting into position.
3Δ. Δ2 slides over the pick set by 4, and Δ4 slides under the pick, meeting 1 on the other side, causing a double team on 1 (though leaving 4 open to dive to the rim. Note: If no one picks up 4, this defensive scheme is ruined).

4. 1 passes to 3 at the middle of the three point arc who passes it to 2.
4Δ. Δ5 sees the double team and meets 4 at the paint. Once Δ1 notices the double team, he slides over for help defense on 1. Once Δ4 picks up that 1 is passing, he dives down to guard the (now) open 5.

6. 5 sets a pick for 2 against Δ3. 2 dribbles around the pick hoping to see a clear path to the basket.
6Δ. But his plans are foiled because Δ4 goes under 5 to meet 2 at the paint. 2 is now cornered against Δ3 and Δ4.

7. After getting trapped, 2 dribbles back out again by a pick from 5. In the mean time, 1 slides to the middle of the arc...

8. While 2 still has the ball, he is getting guarded heavily. 1 sets a pick for 3, and 3 slides to the corner of the arc.
8Δ. So now it comes full circle. Δ1 slides around the pick and heavily contests 1 and denies him the ball. Δ2 now guards 3.

10. 5 takes the shot and bricks it.
10Δ. You have to hope the ball bounces towards the shooter again, or else they get another possession.

This is what it looks like in the game:

That's about it, for the Suns. The rest of their plays are alley oops, 4 down (stolen from the Spurs), cross dives (link), and other Golden State Warrior-like sets.

So now you should have an idea of how the defense works against the Suns. It's a little confusing at first, but it's all very repetitive throughout the course of the game.