Share All sharing options for: 2nd Round Series Preview: [3] Phoenix Suns vs. [7] San Antonio Spurs - The NeXt Men

Foreword: The PtR "staff" is once again putting their mutant powers together to come up with the nerdiest of all series previews. Hopefully the Spurs can keep on advancing so we can do more of these and scare people off the site. Just kidding. Or maybe we're not. Either way, you're stuck with us and this post.

Now that The Return of the Manu is complete, the Spurs move on to face yet another familar foe - the Run 'N Gun, Seven Seconds or Less, Silver-and-Black Beaten Phoenix Suns. But wait -- as Tim C. said in his preview to the preview, these aren't the Suns we know. Oh yeah? Well, let us counter the Suns fans with the exact same argument -- these aren't the Spurs you know.

Our second round story begins with a bunch of supposedly ordinary basketball players, who, as the season progressed, got to discover a lot more of themselves. For the younger ones, they found out about powers they never knew they had. And for a few veterans, as age came into play, they learned how to harness their talents in other ways to remain effective, all while also having to integrate the new guys into their respective systems.

So while each side is peppered with new recruits, somehow, the essence of these two teams remain, which might prove yet again the old proverb "the more things change, the more they stay the same." But really, do they? We shall see, after the jump. 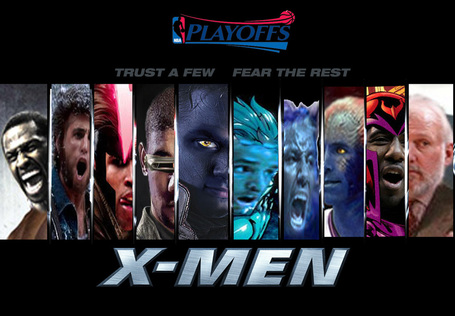 We knew these guys were freaks.

I think some loud, pump-you-up music is in order while reading along.

Almost every superhero story revolves around the battle of good vs. evil, but oftentimes, this is a slippery slope to examine. On one hand, we have the X-Men, who form an organized lot wanting to preserve the pureness of Naismith's teachings and preach the fundamentals of basketball and team play.

Their opponents describe them as disciplined and go about their business in a machine-like way, helped by numerous training sessions in the danger room and supervised by the man known as Popfessor X: 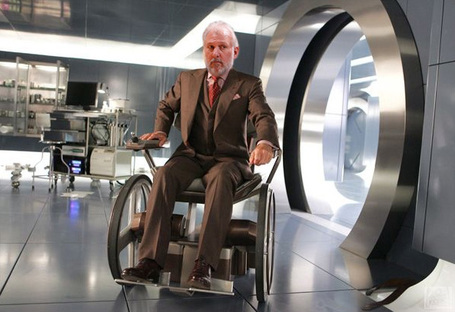 "I think I can grab a glass or two while the team is out on a mish."

While Pop-X can't really go out and play because of his legs, old age and perennial drunkenness, the X-Men are led into battle by their quiet but fearless leader, Timclops. While patience and stoicism are some of his most revered virtues in battle, his eyes are what's considered his best asset -- eyes which contain pure energy to stare down the Crawfords of the world and to give referees the "Who, me?" look and force them into swallowing their whistles. 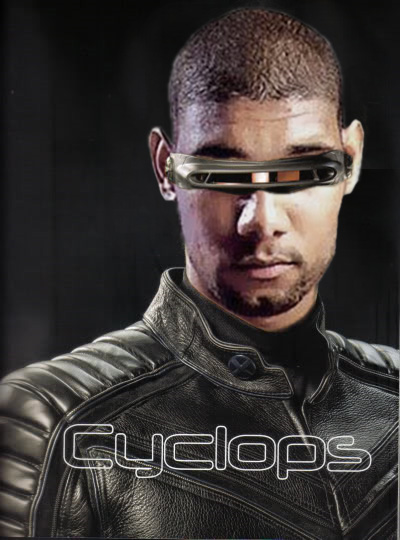 In every team there is always a spitfire, the wild child who likes to do things his way inciting fury to the coach but also gains his approval when these primal instincts save the team from the jaws of defeat. Manuwolverine is one such mutant who thrives in the thrill of competition and provides the team with a killer instinct. His healing powers may have slowed with age, but this hasn't prevented the man from continuing to fight the good fight. 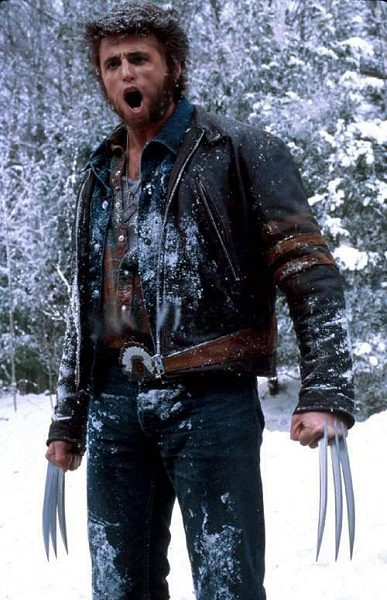 Another integral member is Le Frenchcrawler, a flashy mutant who uses his blinding speed to burst through enemy defenses. 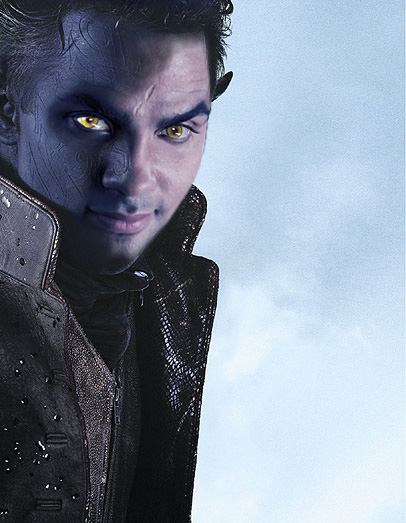 Yellow is the color of Hollywood.

The group also has a young hero who has emerged in the heat of these playoff battles. Ice Hill played without fear and stared down the big bad ugly Mavericks, hitting big shot after big shot to suck the life out of their foes. As the series progresses, it is crucial to observe whether the ice in this kid's veins will melt in the heat brought about by the Suns. 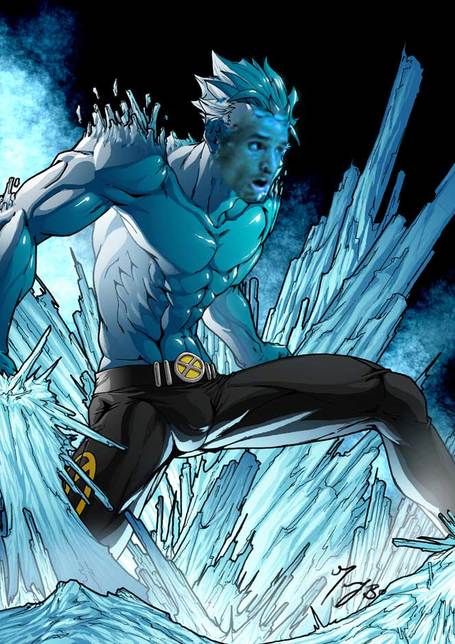 Heir to the Ice Thrown.

Every team needs an enforcer to clean up the mess and try to slow down the big, tough guys of the opposition. Good thing the X-Men have the steel-coated McDyessus for that. 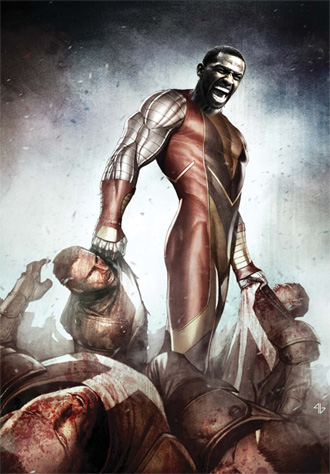 Let the bodies hit the floor.

And of course, the Beast of the bunch known only as BLLLLAAAAAIIIIRRRR. 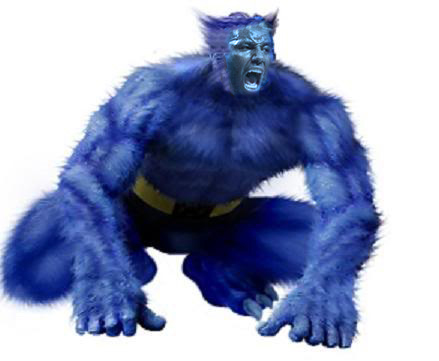 You knew it was coming.

Gambichard is, as his name suggests, a risky move made by Pop-X in an effort to inject athleticism and young legs in an otherwise fading group. The gamble hasn't exactly paid off as expected during the regular season, but slowly, this volatile, much-maligned mutant is slowly starting to fit in and perform well. Also, he likes women but can't seem to stick too long with one. 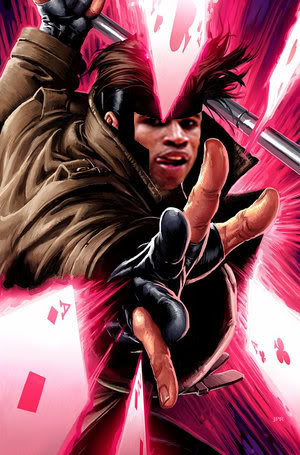 "I raise you three aces and an alley-oop, mon ami."

Rounding up the heroes and one who is seen to have a better time this series compared to the last is Matty Bonner-Grey. Bonner-Grey uses his telekinetic powers to shoot his long distance three-pointers to the hoop. But while he hustles a lot on every mission, foes see him as a softie and often take the hero down first. However, it is said that a dark, evil power resides inside him, which might only be unlocked with the help of Phoenix... 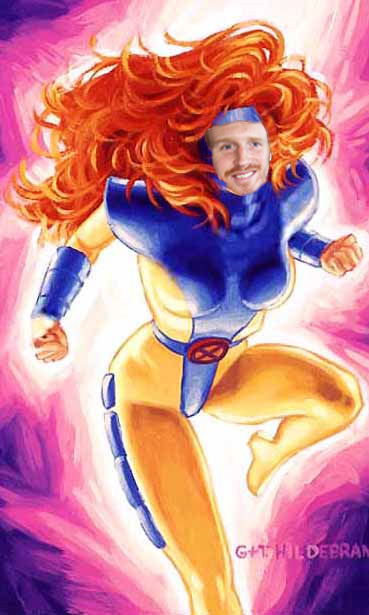 Superhero costumes can be deceiving.

The Brotherhood of Evil Mutants

While their name suggests evil, the team does not believe they are truly so. In fact, the Brotherhood insists they are here to use their mutant-ness to make the league a better place through fast-paced, SSOL-style basketball. To this group, offense is their defense, and they do it with such flair and bravado that other mutants are swayed to this kind of basketball philosophy (although some fail at imitating it -- see: New York Knicks).

The Brotherhood is led by Nashtique, a shapeshifter who has managed to imbue his style of play in his team despite the changing personnel. Nashtique's battlefield savvy and keen eyes allow him to set his teammates up for easy buckets, but he is also considered a defensive liability with his frail body and long, floppy hair. 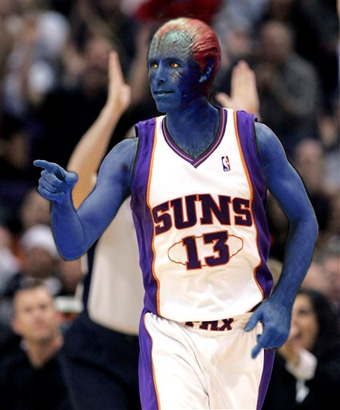 Avatar got nothing on his blueness.

Supporting Nash is M'a'g'n'e't'o, who thinks he should be the top dog of the group. This mentality has often brought disarray in the brotherhood but 'Neto has managed to keep it in check so far this season, and has focused on sucking the ball in with his magnetic powers and putting points on the board. Despite his amazing skills, 'Neto refuses to utilize it for defense, instead wanting to focus on making people realize that his individual powers can single-handedly earn him a championship. 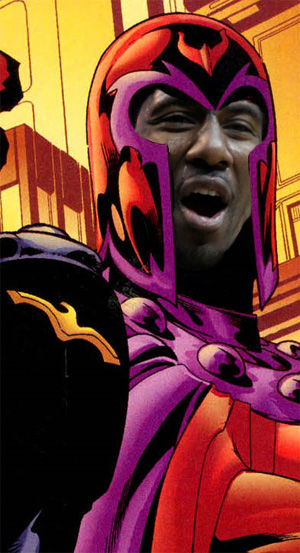 Other members of the Brotherhood include Toadley, an annoying character who likes to Tweet but is deadly accurate from distance, using his icky tongue to guide the ball to the basket. 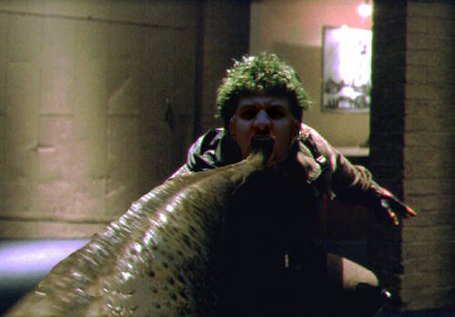 A wildcard who we may or may not see in this battle is Robintooth (not Robin Hood), a large and furry man who puts the hustle and hard work in the Brotherhood's schemes. 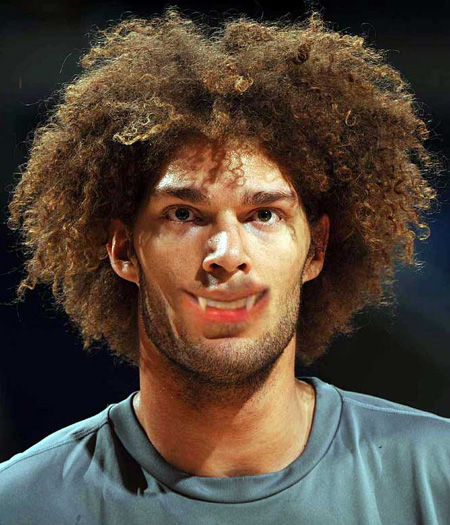 Fangs. They're scary. Or at least they're supposed to be.

Lastly, this mutant is widely regarded as the X-factor in this war, the flammable Pyrichardson. He is capable of launching a fireball barrage of threes, which can single-handedly turn the series. A true personification of the warning: do not play with fire. 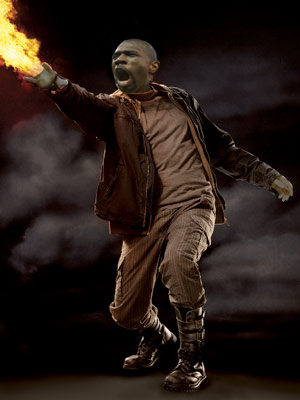 No "Flame On" needed.

Who will triumph in this battle of familiar yet unfamiliar foes? Let the Mutant Wars begin! And oh yeah, let's hope Sternpocalypse and his minions won't have to decide this series. 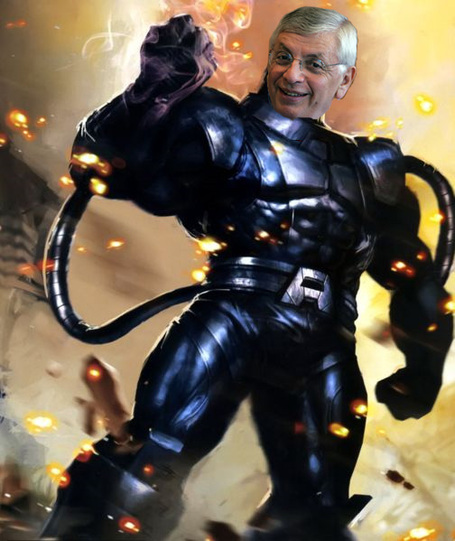 And now, on to the preview.

Preview by CapHill
Photoshops and story by completely_deck, LatinD, silverandblack_davis, and Tim C.
Character suggestions and ideas from all of the above, plus jollyrogerwilco.