Let's take a look at the situation: no Tony, no George, and a brutal finishing schedule for a team that's sputtered throughout the season, despite its previously fearsome reputation. The Spurs are in a very precarious position, with the playoffs looming just around the corner. So, how should they approach it? 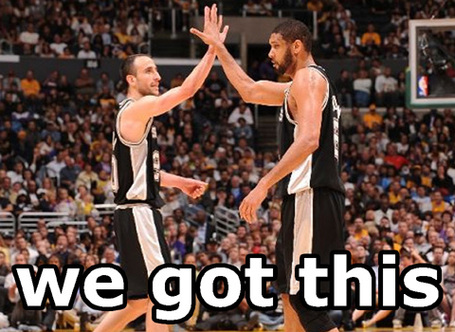 You see, as long as Timmy and Manu are wearing the silver and black, this team is dangerous. Very dangerous. Not that any of that matters today. The early-season trend of beating bad teams and losing to good ones seems to have reversed lately, bringing back memories of championship seasons when the Spurs would inexplicably lose to some of the worst teams in the league, but still had the confidence to beat the best competition when they needed to.

The problem with that is, we aren't playing a very good team today. It's not a bad team either, but in the talent-laden Western Conference, Sacramento's record makes them look worse. And the Spurs might get caught looking ahead to tomorrow night, when they will be here in the Valley of the Sun to take on one of the teams ahead of them in the playoff race.

As always, be sure to get the opposing fans' point of view over at our SBN sister blog, Sactown Royalty.

Shooting Guard: Yeah, yeah - Tyreke is a "point guard". Kinda like Roger is a point guard while Tony and George are out. Simply put, whichever team's perimeter killer plays better should win. The way Manu's been playing lately, I like our chances.

Please don't post any illegal feed links here. Spurs Radio is here if you want to listen to the game. If that's not working, or if you're looking for a video feed in your area, email us at poundingtherockmail@yahoo.com.