First Round Cliche: The Sky Is The Limit

Share All sharing options for: First Round Cliche: The Sky Is The Limit 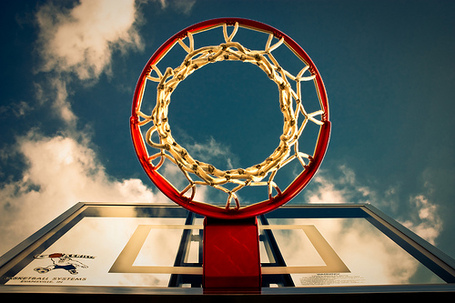 I'm at risk of being accused of being a fair-weather blogger. Guys, I promise it's not my fault I've managed to land the victories when it comes to splitting the recapping effort. I would like to believe that the Spurs' fate is tightly tied to my choice as the impromptu recapper, but the truth is far different: the Spurs will only go as far as the combined mojo of PTR will take them. Yeah.

Tonight the Spurs conspired to kill me. They started the game on fire, and played their best defense of the season for the entire first quarter. The early 20-point lead that ensued seemed part of my wildest fantasies, and I eagerly asked that no one would pinch me. It was too good to be true, right? Right. Half an hour later I was shouting at my screen and the Mavs had retaken the lead by 1 point. I was going back and forth between the kitchen TV and my computer, and felt a pang of something in the middle of my chest, and I was out of breath and I wanted to punch something. Mostly a Maverick. Mostly Dirk. Tunnel vision started to set in.

The Spurs won after a gritty, balls-to-the-wall fourth quarter, and I survived to fear another day. And yet, somehow, I think I wouldn't change a thing about this series. It tested the team, brought about the best in George Hill and proved the Spurs are very much alive, very much a force to be reckoned with. Contenders at last.

Drink, be merry, and multiply, PTRers, for tomorrow we start thinking of the second round. 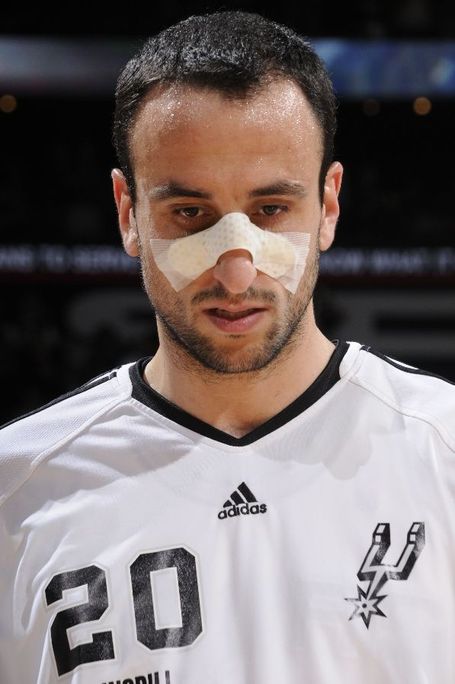 We Have a Team

The photo above is badass. It achieves everything Garnett wants to sell without any of the roaring or the silly sound bites or the getting-on-all-four-and-barking. In fact, I'm almost sorry that transgojobot put his usual genius spin to it. That's the face of a man completely focused on his goal: carrying his team to the next round of the playoffs. I would love to say that Manu willed us to a win, but I'm happy that it wasn't the case tonight. This was the entire team's victory, the result of the combined application of half a dozen wills and talents. Everyone chipped in, and they were greater than the sum of the parts.

Tim Duncan set the tone offensively early on. He scored on drives, bank shots, even a dunk if my memory isn't failing me. He wanted it, he was rested, and he went for it. Once Timmy was doubled he was forced to pass the ball, and more often than not he picked the clever option, as we'd expect from him. Later on he focused on defense as the younguns took over at the other end of the floor, and he was spectacular. His blocks were timely, his rotations crisp, and he gobbled up rebounds as if he was called Blair.

Tony Parker is passing the ball, my fellow PTRers. Tony Parker has a clutch jumper. Tony Parker is allowed to take jumpshots late in any game of the 2009-10 playoffs. He's been trying to be the spark off the bench for the Spurs, and to this day it's fair to say that he's succeeded.

In a display of good old German boneheadedness, Dirk managed to pick his 4th foul before the half, and he immediately went to the bench. Pop immediately pulled McDyess, and Bonner went in. In a phenomenon that probably had Fred licking his chops, the Mavs made a run and ended up winning the quarter. As much as I like Matt as a situational role player, he doesn't match up well against the Mavericks. I spent the next quarter screaming at Pop for not subbing Dyess in. Dirk came in, Dyess followed, a foul was called. I checked the boxscore, and lo and behold Dyess now had 5 fouls. When did this happen?

It's difficult explain how fundamental Dyess was in this game, but his team-high +18 might help. His jumpers were as smooth as advertised, and they came in moments of the game when points were particularly hard to come by. But his key moments came on the defensive end: in a picture-perfect copy of his days in the Pistons, when he hounded Tim into nightmarish showings that nearly broke our Spurs, he stayed on his feet once and again while Dirk pump faked, drove and tried this and that. He played effective defense with 5 fouls, something beyond 99% of this league's defenders. McDyess is the veteran.

If big games are won through big plays, then the game ball should probably go to George Hill. What can I say about this man that we haven't all shouted at each other in all-quotes before? His shooting alone makes him a starter in just about every NBA team, a budging star that didn't get the memo that this isn't supposed to be his time yet. He's too young, too inexperienced, right? I fantasize with the idea of George improving his passing as he's done with his outside shot during the years. I believe he has it in him.

Manu Ginobili is a leviathan. There's no safer place for a game than in his hands, at the free throw line. Even his misses behave, and occur when the pressure is low. As it mounts up Manu's eyes become sharper, his pulse grows steadier. Throughout the game he drew the Maverick's best defender, and he was double-teamed on almost every drive to the basket. Manu's mere presence on the court leaves our shooters free, freer, and my mouth waters at the thought of the corner threes that will rain on our opponents before long.

Yes, ladies and gentlemen, we have a team. 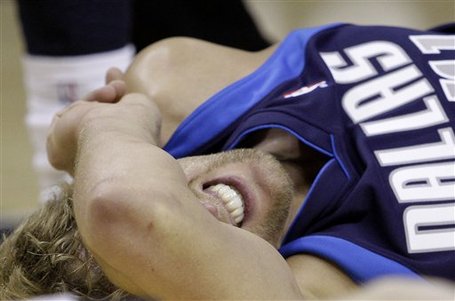 It's 3 AM, and I'm nodding off. Still, I wanted to write a few lines about the Mavericks. Why? Because I just read that this might be Dirk's last season as a Maverick, since he has a player's option. That's the end of the Mavericks as we know them, because Dirk is the Mavericks. That ugly-as-sin German player that is known to mumble David Hasselhoff's songs; the tall, impossibly gifted NBA player that can score over anyone, and has a shot so smooth that he can hit a fade-away bank shot like he did today and have no one call him on it. He could've tried to do exactly that, after all.

Despite SiMA's claims to the contrary, Dirk always showed up to the games against the Spurs. He will be a thorn on our side until the day he retires, a perennial almost-MVP. And yet I don't want to see him leave. For all intents as purposes, if Dirk leaves the Mavericks the rivalry will be over. Or at the very least different, and it won't matter so much despite Cuban's best efforts.

If I were a Mavericks fan (perish the thought) I would think long and hard about Carlisle. I cannot fathom why he benched Dampier for the entire game 5, and then picked him over Haywood in game 6 after Haywood's shaky start. Why did he go to Terry when he was 0-5 at the time, instead of sticking with the rookie Beaubois, who shredded our defense in limited minutes. Was he too French to play?

In the end, the latest incarnation of the Mavericks proved too one-dimensional, too dependent on Dirk and his jumpshots. Too reluctant to lower their heads and drive to the basket. Wade taught them nothing.

The Suns are coming, It's our opportunity to destroy that entire city's collective psyche once more. It's their opportunity for revenge.

How fun are they playoffs? Night, fellas.