Game 4 Thoughts: They Are Legend

Share All sharing options for: Game 4 Thoughts: They Are Legend 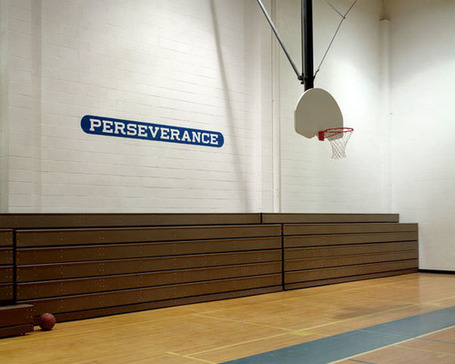 Tonight our Spurs played the kind of game that reminds us all why we are sports fans. Hard-fought, uneven, gritty, dirty, exciting, heart-wrenching, and a thousand other adjectives could be used to describe it, and they still wouldn't be enough. It finished half an hour ago and I'm still feeling jittery - I think I have enough nervous energy to run all the way to San Antonio and do something nasty to Mr. Najera.

Instead I plan to sit down and try to type something coherent about tonight's game. This post won't be a recap, since Wayne will write that, but it will be about the game, the Mavs, about our 3-1 vantage point and the Big Three. I'll mention Pop and RJ and all the other heroes of this game.

But mostly, I want to write about the future. 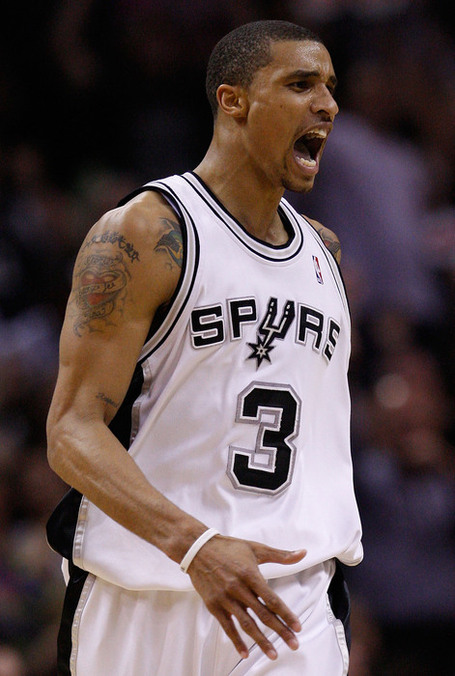 The Future is Now

George Hill, when talking about how generous the Big Three are

Two seasons ago a game like tonight's would've been unthinkable. Manu was 4-16, and only got his 17 points because he was a warrior willing to throw his body into the fray despite his busted nose, his bald spot and the zillion years weighing his body down. Tony went 4-9 for 10 points, and had 5 TOs to go with his 5 assists. Our franchise, Tim Duncan, hit 1 of the 9 shots he attempted, and had only 4 points to show for it. Everything that could go wrong with our Big Three did so.

And yet we won.

We won, carried in part by a beastly rookie and specially by a long-armed sophomore. Regardless of the comment I quoted, George Hill proved he was ready for the playoffs one year ago as he chased around the stars of this very same Dallas team. He was so effective on defense and fearless on offense that he forced Coach Pop to admit he had made a mistake when he had decided to bench him for the first games of that series. Some players are simply innate veterans.

I truly believe we're witnessing George Hill's metamorphosis into an All-Star caliber player. It might not happen in the next month, but the signs are there. 10 point games have turned into 20 point games. As March was winding down he reached the 30-point milestone, becoming our second most-reliable player of the last stretch of the regular season, and the sky was the limit for this kid. Injury struck then, and George was robbed of all the momentum he had built. He stumbled through games 81 and 82, and had two forgettable games in Dallas. We stopped thinking about him for a while, I believe. There were more pressing matters, and maybe it had been too soon for George after all. He was young, there was no rush whatsoever. Next season, right?

George Hill is now the main reason we won the most difficult game of the 2009-10 season. He stepped up when no one else could, made the corner (that corner, Bruce's corner) his home and hounded Terry and Barea, two players who give us fits. The lull has passed, and Cubits is once again turning the corner. I feel lucky I will be here to watch it happen.

"If DeJuan Blair had ACLs, nobody else would ever get a rebound."

DeJuan Blair also showed up tonight, and he was everything we expected him to be: the spark, the relentless rebounder. He hustled the Mavericks into exhaustion, and I was able to quickly forget his poor showings in the series so far. That's Blair right now, in his rookie year. Is there anyone who doubts that his ceiling is much, much higher? How many more times will we shout "BLAAAIIIRRRR" into our keyboards and jump out of our chairs after one of his putbacks?

There will be a time when the Big Three are gone, relegated to the championship DVDs, our memories and the rafters of the AT&T Center. I'm starting to think we will be all right when that day comes. 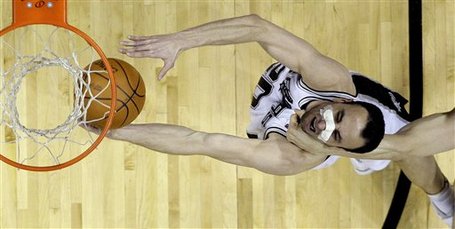 The Present Is Now By Definition, Moron

And yet at this moment, the Spurs will go as far as the Big Three will take them. Or should I say Big Four? Shockingly enough, Richard Jefferson was worth almost-but-not-quite every penny tonight. He moved well without the ball, and showed a knack for being in the right place at the right time during the most important part of the game. His dunk midway through the 4th quarter was worth Terry's head's weight in gold, and was an exclamation mark that sent the crowd into a frenzy. You're all right, Rage.

Tim didn't have a good game, that's obvious, but it was the best kind of bad game. If that makes sense. He was missing shots, but he was also rebounding well and defending better. He covered Dirk when the game was on the line, and had to run towards the three-point line to cover an open shooter a couple of times. He was healthy, active - the rest will come. Tim won't have two bad games in a row in the playoffs - he has nothing left to prove.

Statistically, it wasn't a good game for Tony and Manu. Tony had 5 turnovers too many, especially considering he wasn't throwing particularly risky passes, but as I've mentioned before somewhere along the way he's turned into one of those players that comfort me during tough stretches of the game. He's clutch, or as clutch as players not called Manu, Tim, or Kobe can be. I trust him to do the right thing most of the time, and even to realize that "the right thing" usually is "passing the ball to Manu and getting out of the way". And Manu... Manu probably had the nicest 4-16 game ever, as he's wont to do.

7 assists and 1 turnover speak of a good game distributing the ball, but as always this doesn't reflect Manu's impact. The Spurs seems to become a more generous team with him in the lineup, and second or third passes were not uncommon tonight. Should I mention this three, arguably the biggest shot of the night? He was a pest on D once more, and his extra energy shows itself in the sudden spike of his steals-per-game stat. Most of all, though, he made me smile by playing as if he weren't sporting the biggest band-aid ever on his schnozzo. I saw him getting hit three times on the head in the same play, and I wondered how many players in the NBA would risk further injury like that. How can anyone not love this man?

Najera's foul was worth the flagrant two, the suspension sure to come, and probably a visit from Queness and her bat. I want to believe Carlisle didn't send him in to do that - he's never struck me as that kind of coach. I'll focus on Pop's reaction instead: his immediate anger, how he suddenly turned around and ordered the bench to sit the hell down, and then continued walking toward the nearest referee, red-faced.

As We Go We Go

Speaking of "momentum", is there any other weirder factor of basketball games? The Second Quarter Collapse was just as bad as any RQC we had to live through during the regular season: no defensive rotations, open shooters in the corners, no one boxed out and our shots kept missing. The game was theirs. And then a shot went in, and another, and suddenly we were doubling Dirk and then getting to the shooters in time, and stealing the ball, getting key rebounds.... And we were tied again, and then 7 points ahead.

Is good play really so contagious? I wonder if it's somehow influenced by a subconscious decision to spend their physical reserves simultaneously to maximize its impact. I'd factor in the crowd's influence, but it can't be - unless silencing an enemy crowd is an incentive of its own. I know it sounds like a silly question, but I'd love to know how they come to be.

I'll have to think more about these odd stretches that seem to happen in every major game, but I welcome your input. 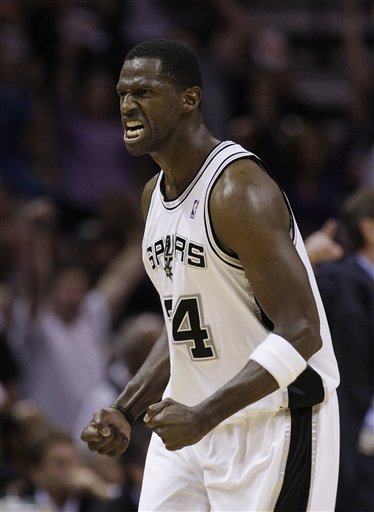 I loved everything about this game. Most of all, I loved that we won it.

I enjoyed the hard fouls, the intensity of the crowd, and the unpredictability of the score. Playoffs basketball at its best - everyone really wanted to win, and it showed. At some point it became painfully important to me that we win, and I died a little inside when the Mavs pulled within two during their 4th quarter comeback. As I said in the intro, this is the kind of game that makes you love sports. All that hope and emotional investment in the outcome of a game paid off, and my day became just a little brighter. Bragging rights were earned, and foes were vicariously vanquished. ...Hmm. Explaining one's love for sports sure makes you sound dorky.

We are now 3-1, and playing our best basketball of the season. I guess this is what pundits call "peaking at the right time". The series is far from over, though, and we still have to prove we can win it and thus regain some of that champion swagger. Thinking beyond the Dallas Mavericks doesn't seem to be compatible with the mojo rules, so I won't. Yet tonight at least, the Spurs looked ready for new, bigger challenges.

For a moment in the 4th quarter, they looked like a true contender. What more can we ask for?