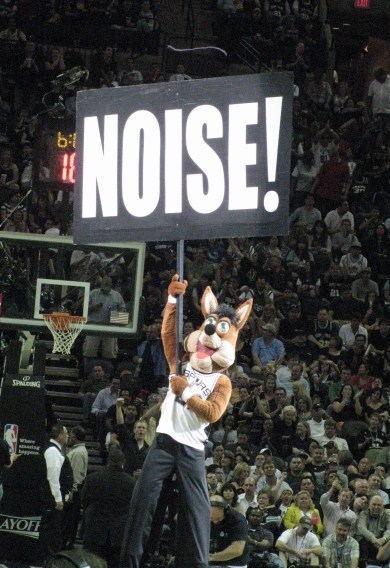 When a Coyote on stilts asks for noise, he gets it. The AT&T Center was rockin' last night. Here are some photo lowlights, highlights, and sidelights from Friday's game.

LOWLIGHTS: Let's get the unpleasantness out of the way first. This is Manu just moments after getting the blow to his nose. 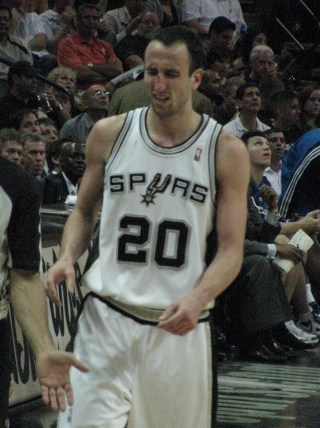 With the trainer working frantically to stop the internal bleeding from Manu's nose, what's Manu doing? Focusing on the game, of course. 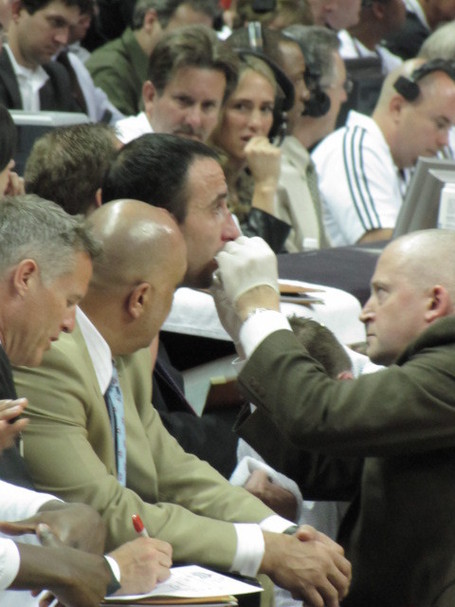 When efforts to stop the bleeding failed, a mad dash was made by Manu, with a towel to his nose, and the trainers to the locker room. A few minutes later he returned to the court with a small, butterfly-like bandage on the cut on the bridge of his nose and his nostrils packed to stop the bleeding from inside the nose. 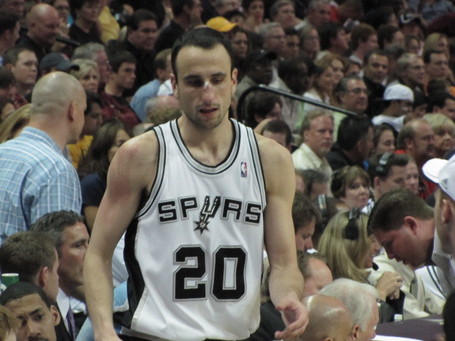 Near game's end, Manu had added two more band-aids to his nose when the bleeding would begin again. He would run to the bench, grab a bandaid himself, and put it on over the other bandages. He was NOT coming out of the game! 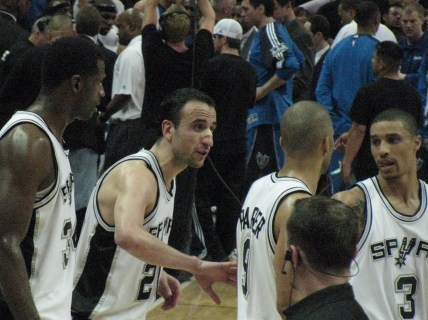 Manu made three driving layups in the fourth quarter, but none more dangerous for his fragile nose than this one against Haywood. "You don't tug on Superman's cape, you don't spit into the wind, you don't pull the mask off that old Lone Ranger", and you don't mess around with Manu's nose! 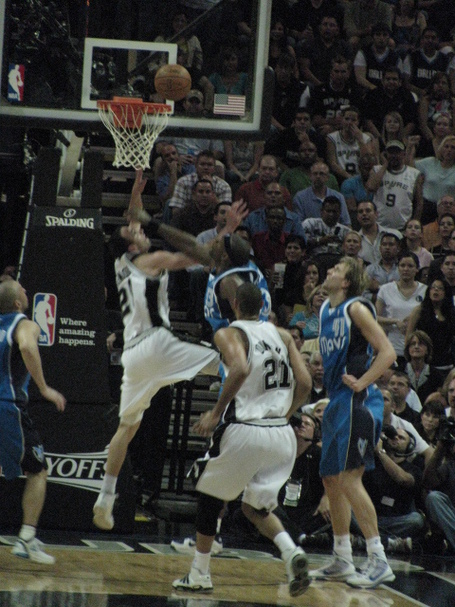 HIGHLIGHT: Tony's shooting in the fourth quarter sealed the win. I don't recall seeing him play with as much passion as he did in the final minutes of this game. Eva "tweeted" Hubby is good, and, indeed, he was very good. 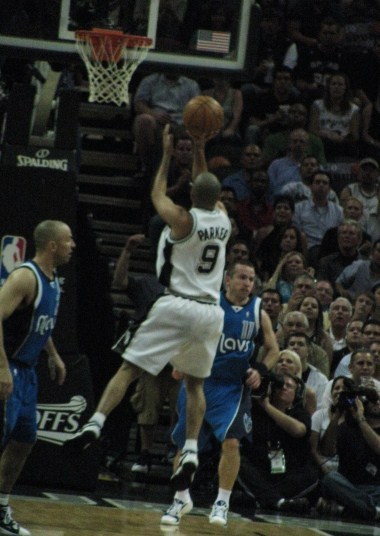 HIGHLIGHT: Dice gets a dunk! The crowd loved this! 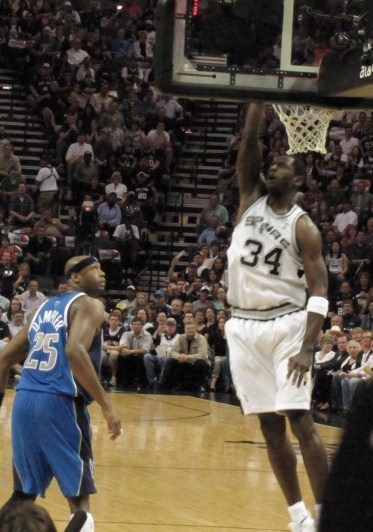 HIGHLIGHT: Marion said he had the "clamps on Ginobili" in the first half . Funny - don't see him in this picture. 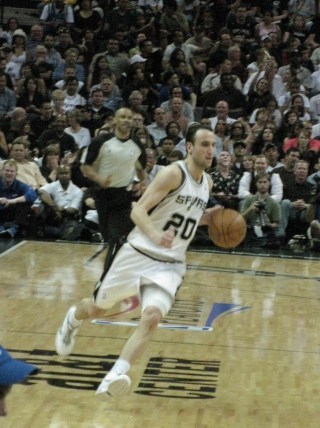 HIGHLIGHT: TD over Dampier, who would complain about the lack of consistency by the refs in calling fouls. 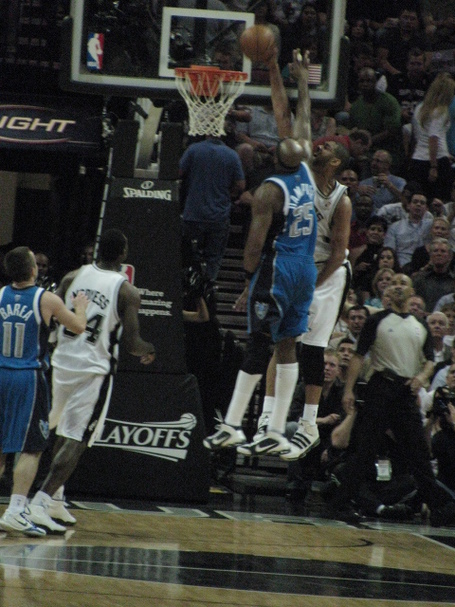 HIGHLIGHT: RJ steps back and lets it fly! Does anyone remember that nursery rhyme:
"there was a little girl who had a little curl, right in the middle of her forehead; when she was good, she was very, very good, but when she was bad, she was horrid" ? Jefferson has no curls, but his play this season made me recall the rhyme. 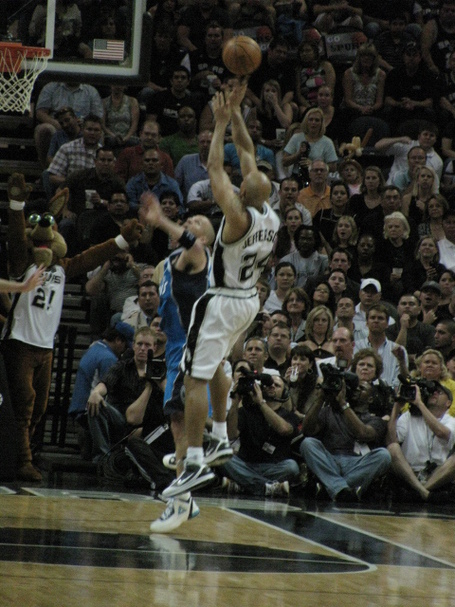 HIGHLIGHT: Manu blocks Dirk's shot in the first half. 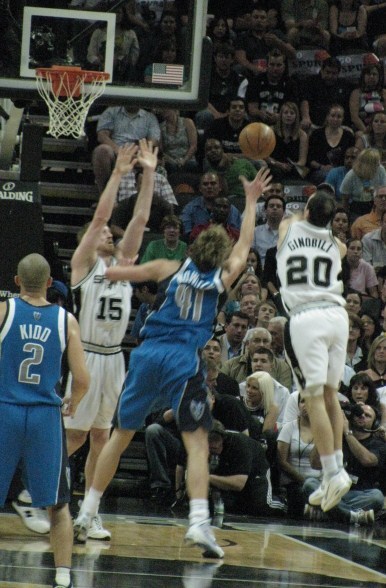 SIDELIGHT: Pro wrestler Sgt. Slaughter ordered the crowd to make some noise. "Sir, yes, sir! I will be loud. I will be proud." But I'm not rowdy - I'm a Spurs' fan. 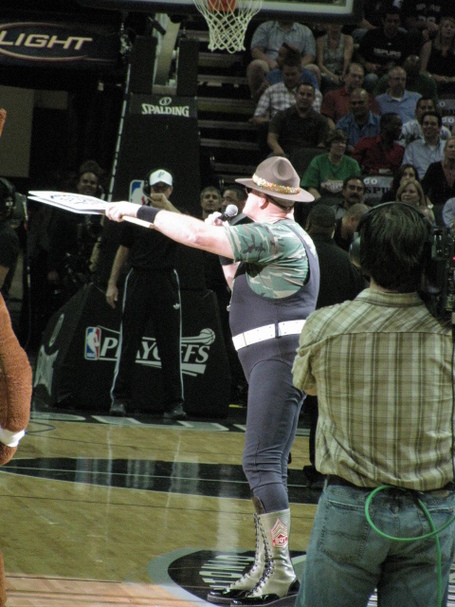 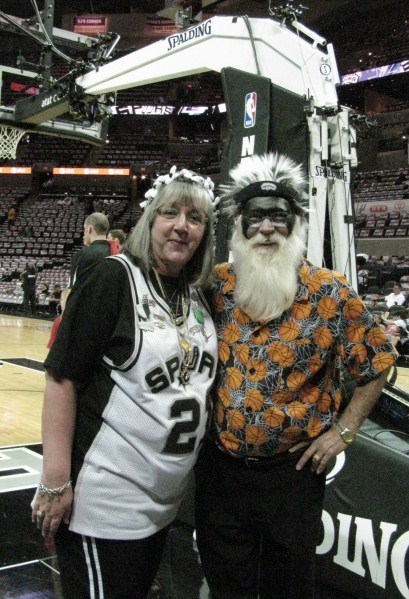 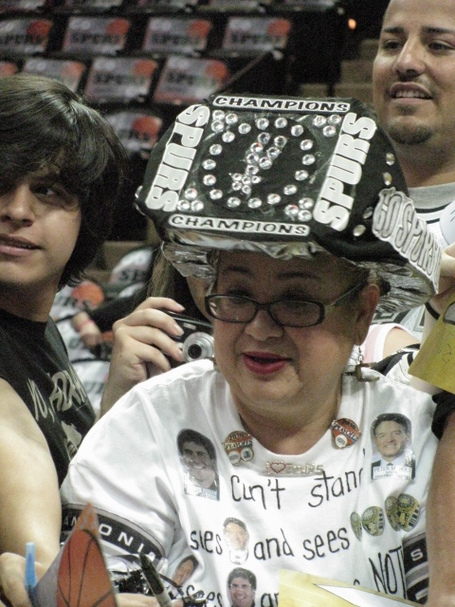 SIDELIGHT: Singer CeCe Segarra sang the national anthem and returned to entertain the crowd at halftime. 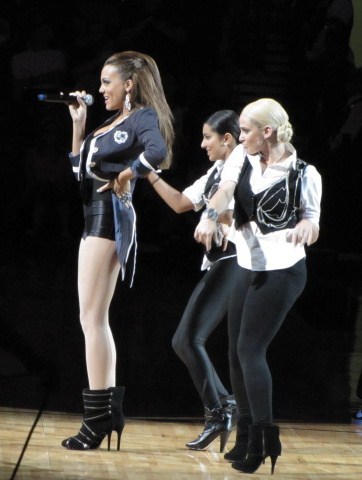 SIDELIGHT: Why a shot of the crowd? Well, it's not just ANY part of the crowd - it's the center section on the charter level, the high dollar seats whose occupants usually are the "frozen chosen" when it comes to cheering. On this night, they were standing and going crazy with everyone else. Treasure this image - it is rare! 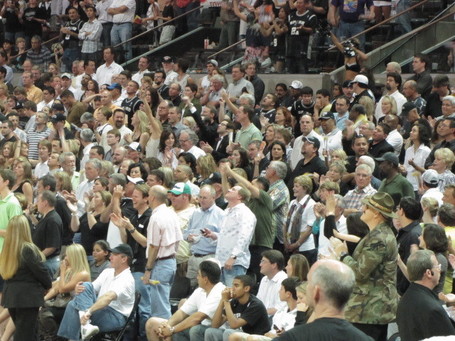 Hit Me With Your Best Shot, and I'll Beat You Anyway and Ouch! El Narigon Takes a Blow to His Nose