Venturing into the middle of Mavs Mania for playoff games wearing Spurs gear requires a tough skin, but, hey, I taught high school for 40 years - nothing scares me! I sat on the baseline near the Spurs bench, but a few rows higher than my SA season ticket. Here is an assortment of images from the first two playoff games.

If I ever doubted this was a big game, I was convinced by the huge number of TV cameras covering the Spurs as they were introduced. Yes, Manu drew the loudest cheers here like he does in SA, but not of the same positive vibe. 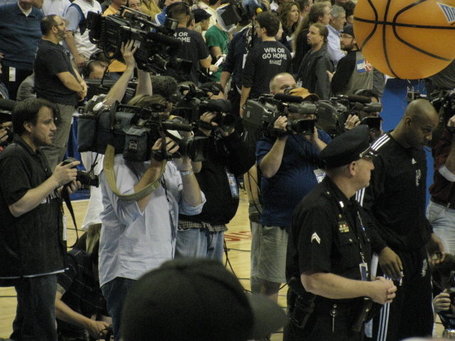 I encountered these guys in the lobby auditioning for the next "I wear no pants" commercial. Actually they got free tickets to the game to sit in a special spirit section the Mavs have for people who show up in the most outlandish gear. 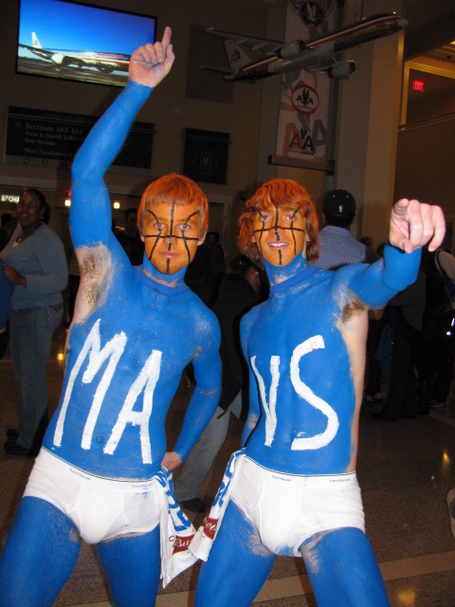 But, wait - it gets worse (and somewhere a mother is wondering where she went wrong): 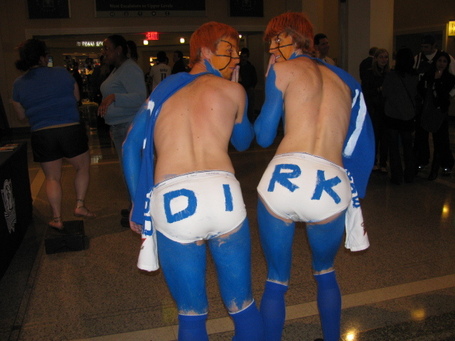 There's something not so fierce about a powder blue pony for a mascot (and the Coyote puts him to shame as a performer). 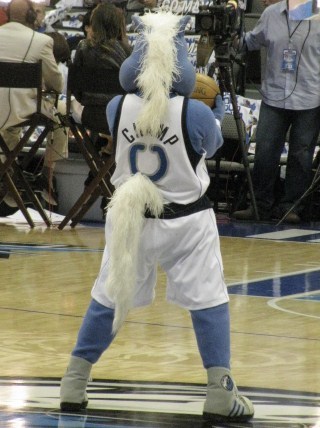 Don't try this at home, kids. And parents, don't even think about it unless you've got at least two other adults to help get you off the floor. He goes all the way across the floor doing this stretch. 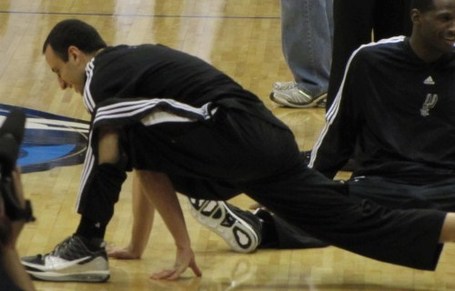 The guy in the middle is the Mavs' on court announcer (looks like Billy Crystal's illegitimate son), the guy on the right is a character who sits on the front row at Mavs games (borrowed the coat from Craig Sager), but the guy on the LEFT is an NBA legend. His name is Jim Goldstein - a wealthy resident of LA who makes between 110 & 120 NBA games in cities all over the country each season. He is known to coaches, players, and even David Stern. He always wears the black leather hat. Heck, I thought I was doing good seeing 54 Spurs games so far this year. 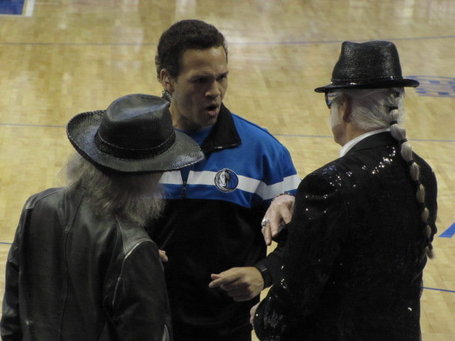 Opening tip of the second game: Hill will control the tip, but look at Manu. He is already taking off to his right to await the pass from George and drive the lane for the opening bucket. Everybody else is standing still. 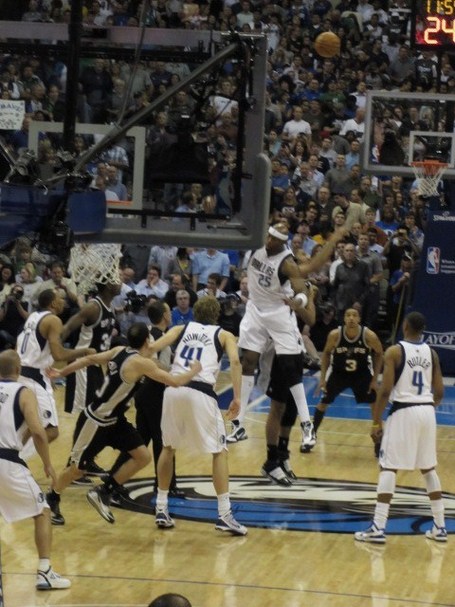 No, that's not some new Mavs' defense to stop Timmy around the basket. Just a member of the Acrodunk team tumbling through a sign before dunking during half time. 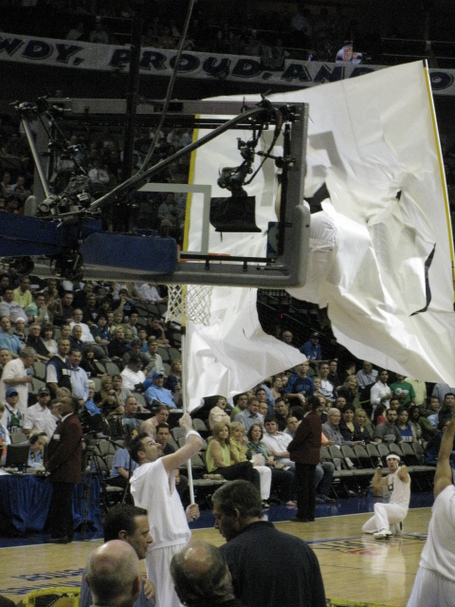 There was a lot to distract Manu as he shot his free throws (didn't faze him), but why is that Spurs' fan waving her
"I love Tony" sign at him? 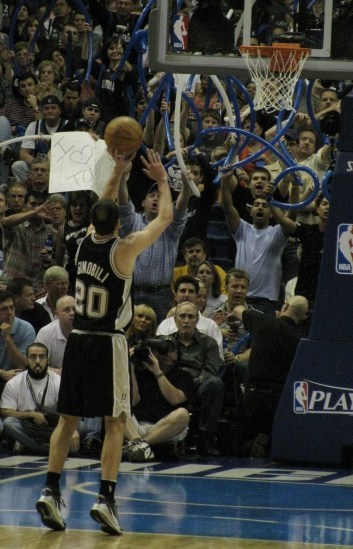 Pop barking at the official, who seems to be deaf. Mark Cuban can be seen just over Pop's head, dressed in blue t-shirt and jeans. 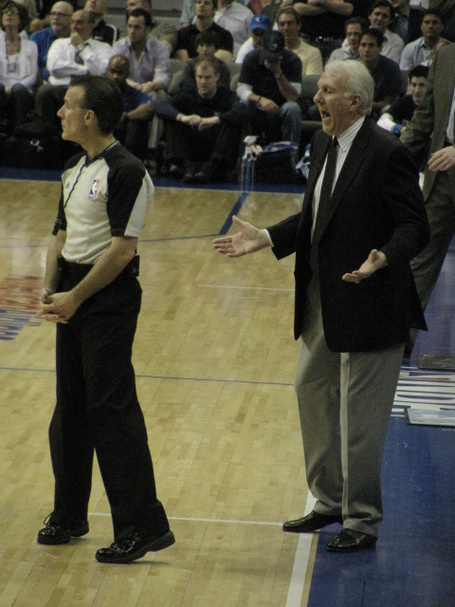 Jason Kidd with the "deer in the headlights" look, wondering which way Manu is going to go, and McDyess, wondering if he is about to get one of those bullet passes aimed at him. And Manu? Probably doesn't know yet himself what he is going to do. Don't we love him for that? 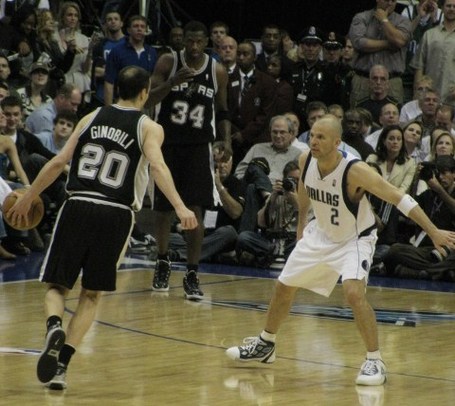 And I leave you with a photo of the "Rowdy, Proud, and Loud" Mavs fans just moments after Manu sank that three point dagger. It looked like a fire drill! 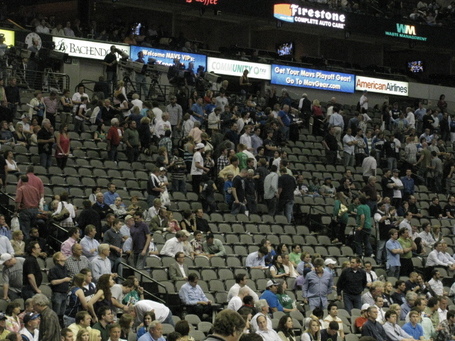