Share All sharing options for: Game 2 Quick Cap: Tachycardia, Fist Pumps and the Devourers of Ponies 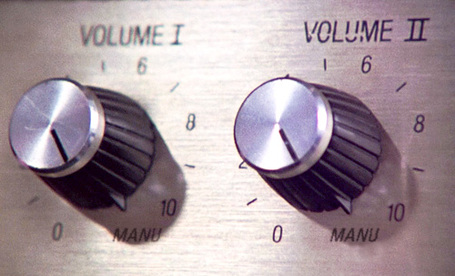 transgojobot dixit - after a fashion

I'm supposed to be clear as water in these little intros, so that search engines can pick up our words and direct soon-to-be PTRers right into our clutches. That's how this family grows: we lure them in with pretty words, and then BAM - we correct their grammar, ask them not to type in the title box and mock them when they write in all-caps. So please, at the risk of sounding redundant, allow me to be perfectly clear.

They won it convincingly, with authority and panache, despite the ups and downs that always accompany a game against the mighty Mavericks. They won from the very first minute to the end of the game, with no lead changes. They won against Dirk, against Cuban's drunk bro, against Hill's injury woes and RJ's timidity - against the announcers, ESPN's prediction and even their serial free throw shooting.

We have a series, people - and I couldn't tell you how happy I am to be typing those words. Let's jump. 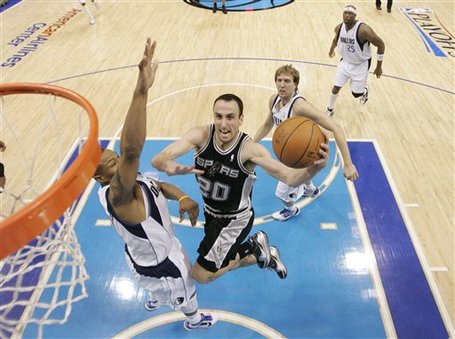 "I am a beautiful animal! I am a destroyer of worlds!"

Let's start with the heroes, because it's easy and they deserve it. (See, if you sign up to write these you'll be able to indulge your biases.)

Manu Ginobili. Manu effing Ginobili. Where to begin? Trying to describe 2010 Manu is like attempting to lick your elbow: you can try, but you'll only succeed in making a complete fool of yourself. I can't do it, not quite, not as he merits. I wish Matthew was still around, because he got the closest I've even seen. Instead of describing his game, then, I'll simply focus on his plays. Hopefully they'll be enough to give you a vague idea of the impossibly high plateau Manu is currently residing in.

There were two different moments in this game where Manu simply stood up beyond the line and took a high-arching three, and for once I didn't even doubt it would go in. He was in rhythm, he was accurate, he had his legs - he wouldn't allow himself to miss, as cliched as that sounds. At least, that's how it felt to me - and that's all that matters.

For months this year I was wincing along every time Manu drove to the basket. I couldn't help it. As much as it pains me to admit it, I was just as uncertain of his health as the throngs of fans asking for his trade. Every penetration was a gamble. Today I realized that feeling's completely gone, lost somewhere along the month of March. Injuries? What injuries?

The first basket of the game was a short two-pointer by Manu. Déjà vu, don't you think? He wouldn't score again during that first quarter, but he set the tone for the game once more. On most other teams he'd be the focal point of the offense all night long, and he's filled the role for the Spurs as of late. Not so much tonight, though, because we have Tim. 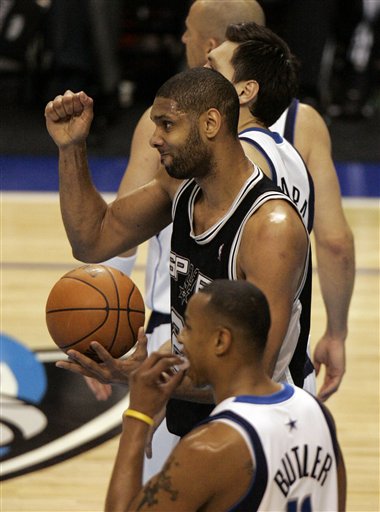 "He had been doubted all season long."

Too old, too slow, not good enough. Many said it was no longer his team, that he was now a role player. Yet when the going got tough, when the momentum was all theirs and we desperately needed some points and some leadership...

IT WAS TIM MOTHERFUCKING DUNCAN WHO STEPPED UP AND CRUSHED THE MAVS HOPES AS IF IT WAS SMOOTH ALUMINUM FOIL THAT ONCE CRUSHED CANNOT BE SMOOTH EVER AGAIN. HE PUT THE TEAM ON HIS BACK, HE SAID, ’LET’S FUCKING GO’, AND IT WAS SO. FOR WHILE OTHER PLAYERS CARE ABOUT STATS AND AWARDS, TIMMEH’S SINGLE MINDED PURSUIT OF THE ULTIMATELY GOAL IS SO INTENSE, NOTHING, NO ONE CAN STAND IN HIS FUCKING WAY, LEST THEY BE DESTROYED BY THE SEARING WILL OF THE MAN, THE GOD THAT IS TIM MOTHERFUCKING DUNCAN.

(Where did that come from? Please consult the Lexicon, neophyte. It's coming.)

There's a difference between the endless drudge of the regular season and the playoffs, between playing back to back and FOGAFINIS and traveling around the country and staying in a town for days and focusing on your opponent. Duncan, veteran of a thousand battles, knows this. Tim was within arm's reach of a 20/20, and made some impossible shots during the third and fourth quarters that kept the Mavericks at bay. He was everything the team needed: clutch, leader, defensive presence. The team looked lost when he went to the bench - it looked permeable.

The Spurs scored 18 points before garbage time. Of these 18 points, 10 were scored directly by Tim. 2 were assisted by Tim. Manu’s three was off of a great Duncan screen that gave him just enough separation for a wide open look. So Tim scored 55% of the points. If you add the assist and the killer screen, Tim had a direct hand in 83% of the Spurs’ fourth quarter offensive production.

For a night at least, this was Timmy's team once more. We should hope this trend continues, if we want that 5th ring.

"The big 4 we anticipated at the beginning of the year."

But Manu and Tim had already played good all-around game on Sunday, and the Spurs had still lost. What changed?

Richard Jefferson had a good game. Unfortunately, I'm still unsure why or how. After a full season of watching him play I'm still not close to distinguishing the factors that make for a Good Peanuts Game (tm). Maybe BlaseE can tackle this. Or Tim Varner. Or Hollinger. Maybe Ludden? I'm not sure even RJ knows. We can all agree that we prefer to watch him drive to the basket instead of jacking up threes, I imagine, even if we don't know what makes him convert that reverse layup instead of get blocked by a 6-ft guard.

Considering the stakes and his performance in the first half, Richard Overpaid Jefferson played his best game as a Spur. If this is the result of being called "dog" publicly by Pop... well, prepare yourself for some serious name-calling, Rage. Pop is nothing if not practical.

I'm not going to lie: at times I felt Tony Parker was hurting the team when he ran the team. He dribbled too much, drove into the paint without a plan and had to stop when surrounded by giants, passed late in the clock to covered teammates and forced to take hurried shots. There were no kick-outs, passes, screens, pick and rolls. It was ugly, and in my mind I only had Tony to take the blame. And yet when I checked the boxscore I realized that he had twice as many assists as the next guy (good for 8 in the game). Huh.

The moral is, you can't trust stats, but you can trust rusty Tony Parker to be solid.

Hill is obviously playing hurt, our of rhythm, or both. But he's trying, and I love him like a man loves another man who is good at sports. He'll come back, if we give him time. 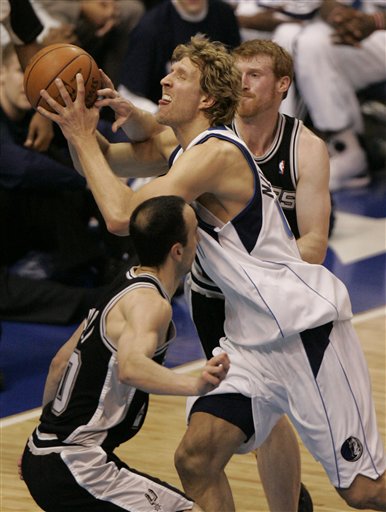 McDyess was solid rebounding and made some shots, but it was his turn to defend Dirk, he simply rolled him up in a tortilla and ate him alive. At this hour Dyess is probably busy starring Pop's savvy wet dream, but I hope he catches some rest because we're going to need him to repeat his performance for at least three more games. Genetically-engineered from samples of David Hasselhoff, Jurgen Klinsman and a doormat, Dirk was markedly human last night, shooting only 9-24.

Terry was the one that got away, using screens and timely passes to singlehandedly threaten the Spurs's dominion of this game. Fortunately, there was no one else, and the Mavs lost home court advantage. The Spurs have proven they can win on the road, and that's a deep psychological impact.

Credit where it's due

Thanks go to One4theThumb, DrumsInTheDeep, Chilai, TDzilla!, Manuwar and Hipuks for the phrases used for titles. I had a completely different idea regarding my request for contributions, but there weren't many responses, and only two of them lent themselves to a proper recap. We'll try again some other day.

Plays of the game

Courtesy of completely_deck. Don't miss the finger roll from the free throw line Manu gifted us with.