Share All sharing options for: Spurs 112 vs Magic 100: And We're Good Again 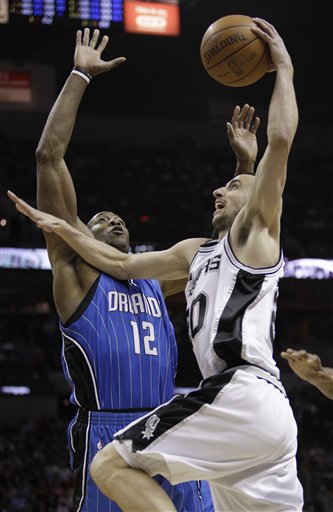 Evidently, the Spurs are good.

How good remains to be seen, but after convincing wins against the Celtics, the Cavaliers and now the Magic, you have to like their chances in an eventual NBA Finals. Will the Spurs be able to slip past Dallas, Utah? Do they have it in them to counter Gasol and Kobe? More importantly, will Tony make it back in time to rediscover his healthy scoring self? Advantageous seeding might be our only chance to give him the time and basketball he needs to regain his (French) flair. Every game matters, and if you're willing to ignore the New Jersey travesty, the Spurs seem to be playing as if they knew this.

But this should be a recap for tonight's great game, not a State of the Spurs Nation soliloquy, so join me after the jump for a hack summary of Manu Ginobili's wizardry.

"MANU GINOBILI IS A MOTHERFUCKIN' WIZARD"

Aaronstampler dixit. It was his only comment, his first in months, but it summed up pretty well what Manu has become for this Spurs team: magical offense, hope-building wins, an alchemist able to turn any 5-man unit into basketball gold.

2005 Manu was a relentless slasher and a clutch assassin. 2007 Manu proved he was able to score 30 points on any given night, wake up the next day, and drop 30 more. 2010 Manu might just be better than them both, point by point. 2010 Manu slashes, executes in the clutch, makes 43 points in 35 minutes - but he also passes, distributes, runs the team, and finds time to perform at least one key defensive play per game. Him and the +/- stat have become fast friends, then lovers, and now are planning to move to Boca and build a house on the beach. 2010 Manu might lead this team to another championship, if the team accompanies him.

I've often been accused of hyperbole. All I can say is that it's not my fault: Manu is hyperbole, he embodies it; he plays as if his every move was a statement worthy of all caps and extraneous exclamation marks. There should be no doubt in anyone's mind that if Timmy is the window, Manu is the frame.

Basically, the offense. The Orlando Magic possess the by-the-numbers best defense on the NBA this season - the Spurs scored 112 points. Once again we've proved we can score without Tony Parker, and the mouth waters at the thought of his efficient 20 points replacing Mason's bumbling jumpers and Jefferson's powerprayers. Of course, we still need to prove we can win with Tony.

43 points for Manu on 25 shots speak for themselves. The usual Robin to his perennial Batman, George Hill, was quiet tonight with only 9 points, but he focused on distributing the ball. McDyess took a page from the Beast's book and took advantage of several putbacks to boost his stats. Jefferson tried hard, and he has that going for him. Bonner decided early on to get back every single point he lost on defense, and despite low accuracy from deep, his drives to the paint kept the Magic guessing. It's time to admit to ourselves that his "shyhook" is a weapon whose efficiency is completely unrelated to its complete lack of anything resembling aestheticism.

And yet, while Manu kept us in the game all night long, it was probably Timmy's brilliance that let us pull away during the third quarter. Early on the first quarter the referees decided to prove they were bigger than the game, and called three ridiculous fouls on Tim and two more on Dwight. The majority of the first half was thus played without the big men who form the core of their respective team's defenses, and Gortat and Bonner got the spotlight. Hilarity ensued.

When the second half rolled around, Dwight remained hesitant. He missed his first 8 free throws in a horrifying fashion, his shots so ugly that Shaq himself might retch at the sight, and got himself into further foul trouble courtesy of the Big Two. Duncan, on the other hand, reminded us what a world class player he is when he is rested - the hour-long break might've been a blessing in disguise. He scored at the post, schooling Gortat once and again with turnarounds and short hooks; he scored from the top of the key with his low-arch, almost violent jumpers; he scored off athletic layups after beautiful bounce passes from Manu. He was everything we need him to be in the playoffs, and that also gives me hope.

What Went Wrong (For The Magic)

I could complain about the RJ's boneheaded plays that exemplify an appalling lack-of-BIQ, about Mace's off-rhythm madness. I'm this close to cursing the rookie wall Blair hasn't been able to break through like the Leviathan I know he is. Why bitch and moan after such a good win, though?

Let's focus on the Magic instead. Now, I'm wary of drawing conclusions from a single game, so take this with a grain of salt the size of Blair's momentous derrière.

During the first quarter Popovich was ejected from the game. It was during a timeout, so it's not clear what happened. For all I know the ref might've just told Pop that pinot noirs were perfect for sangrias - or it could've been the many ticky-tacky fouls called in that first half. Regardless, number one assistant coach Mike Budenholzer was forced to man the ship, and considering his record this season (0-1) we all were nervous about the outcome. I'd like to publicly apologize to Mike, because Pop's absence wasn't noticed tonight, and he didn't outsmart himself with the rotations. Most importantly, during the fourth quarter Coach Bud took a ballsy decision that paid off: Hack-a-Dwight. Superman was 1-2 in both of his trips to the line, but it was a perfect call to frustrate Dwight and stop any possibility of a Magic comeback.

How can the Magic keep this from happening in the playoffs? I fully expect the NBA to take notice of how effective Hack-a-Shaq was in the past to disrupt the Suns' offense, and how psychologically weak Dwight looked tonight. We'll see if the young center has it in him to avoid that stigma.

Another low point for Orlando tonight has to be Vince Carter. As good as Jameer Nelson and Rashard Lewis looked tonight, as we are used to see from them, Vinsanity looked pedestrian and slow. Vince was brought to the Magic as the missing piece in their championship machine, replacing Turkoglu, the team's best closer. And yet there wasn't one moment tonight when Carter showed any sort of ability to singlehandedly turn a game around, as the Turkish wonder showed last season. The spark just wasn't there. Considering Carter's numbers are down across the board from his career averages, I can't help but wonder if this virtual trade wasn't fool's gold. His numbers in March were good, though, so as I said, I might be off here.

Oh, and By The Way

Hipuks has this to add: 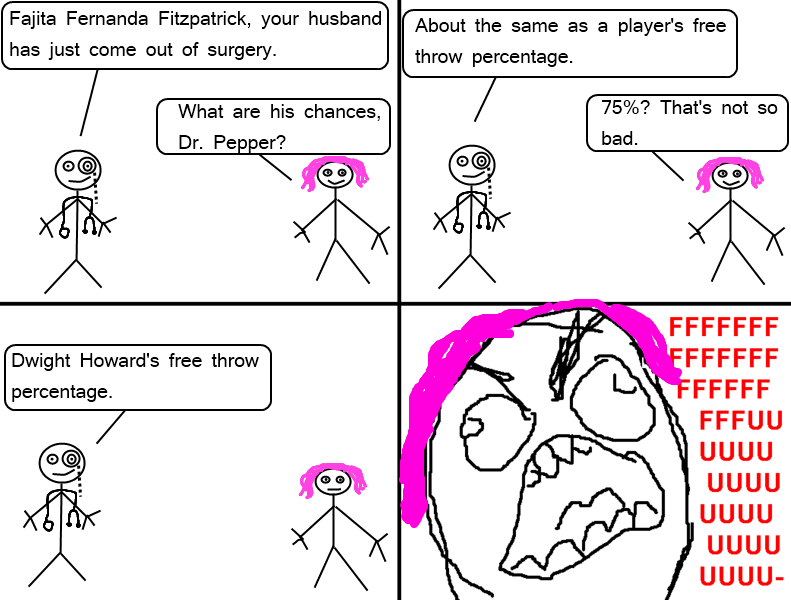