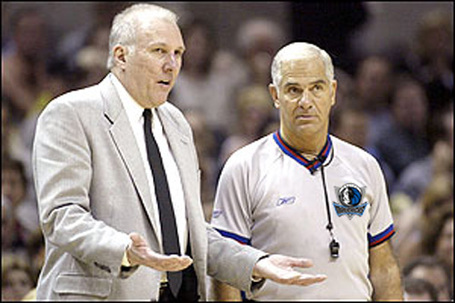 My last gasp of referee-hating for today.

It's always hard to recap a tough loss so I'll make this one short but not sweet (bitter maybe? I hope not). As I captioned in the photo above, that's as much as I'll talk about the officiating in this game. I'll leave the referee bashing to you guys, after the jump.

I didn't get to watch the entire game but I did see about 3/4s of it to have a good gauge of what happened. Let's break it down into two parts: the rights and the wrongs.

What We Did Right 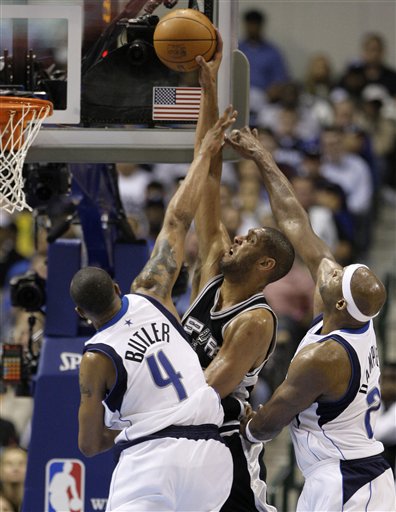 Offensive Execution - We swung the ball around beautifully and had a lot of open looks for the most part. The Big Three had their way with the defense, especially inside where Duncan and Parker did their damage. Manu, too, and he shot well from distance, making three threes (out of the team's stinker total of 4 threes).

Defense - As many have already mentioned, we won't defend for a full 48 minutes like the Spurs of old but at least we can do it for stretches. The single coverage on Dirk allowed us to contest shooters and body up the opponents until late when Pop decided to send double and triple teams to Dirk. The big German was then able to read the defense and kick the ball out to his shooters who put the game away with those dagger threes. Only Dirk and Haywood shot above 50% and Caron Butler, despite scoring 22, shot 8-19 and Terry was 2-9. Assuming Dirk won't be able to shoot that well for the entire series and the Spurs will eventually figure out a way to clean up their fouls, we can take this as a positive.

Composure - Only a week or two ago, we saw how a still psychologically fragile Denver Nuggets team imploded when calls weren't going their way in the game which the Spurs won. The roles seem to have reversed against the Spurs in this one, but credit to the players for not losing track of the goal, which is to escape with a win. No matter the calls, the Spurs didn't whine too much (despite me calling for Pop to get a technical) and kept hanging in there so that's definitely a plus. Say what you want about Duncan's bulging eyes when he gets called for a foul, but this team is mature enough to not let external factors get the best of them.

What We Did Wrong 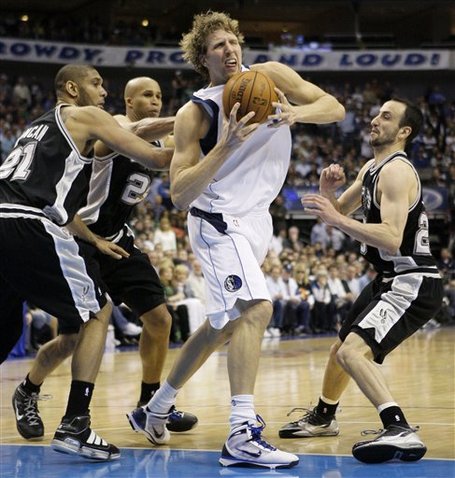 A lot of things, actually. Some may be of our own doing, others might not. I'd say let's not take the route of blaming external factors but rather look at the things that can still be improved upon.

Too many fouls - 28 fouls, with some inflation because of Hack-A-Damp in the 3rd and 4th quarters. Just like how we use that strategy to throw teams off their rhythm, a lot of our fouls took out momentum when the team seemed like they were ready to start a run.

Rebounding - To me, probably the single biggest thing that secured the win for the Mavericks. Dallas were +5 on the offensive end, with Dampier grabbing 5 and Haywood, 3. We held the Mavs to 47% shooting but shot ourselves in the foot by not securing those game-controlling defensive boards. Bob Knight likes to point out that rebounding is a good measure of a team's intensity and desire to win the game. The Mavs came out with a sense of purpose and wanted this one more than our Spurs.

Lack of production outside of The Big Three - Dice might be old and slow, but you just have to love that the man shows up for big games, no matter what. As for the rest of the team, it brought back memories of last year's playoffs when the role players again dug themselves a bunker and stayed there, choosing to blindly lob grenades at the enemy that were waaaay off target. Still ailing or not, George Hill's defense and production is sorely needed to offset Jason Kidd's effectiveness. And, as one of my friends told me, Richard Jefferson should stop stealing money.

Roger Mason, Jr. - It's his second playoffs go-round with the team and he still sucks. Me thinks Pop is trusting him too much and waiting for him to get over the hump. Sadly, when you've played as many awful games as Mase has, there is no hump. No hot hand phenomenon or any of that bull crap. Put an inexperienced but hungry youngster in there just for a few minutes and he might be able to make more of a difference than a supposed league veteran. Also, the coaching staff should've read Wayne Winston's lineup suggestions.

Good thing is, there's still plenty of basketball to be played and the schedule won't let us worry about the players not getting enough rest. As Manu succinctly put it, post-game:

"We lost by six points and made all those mistakes," Ginobili said. "That’s the good side of the story, that we really can improve."

Kudos to the Mavericks for a well-played game and making every Spur outside of the Big Three look like deadweight. Remember, it's still a long road so please do avoid getting too high or in this case, too low. Don't just trust in Manu. Trust in the team. They'll figure it out. Hopefully.

Your 3 Stars - Since when was the last time we had them all together here?

3 - Tony Parker. A single destructive offensive force from the bench. 18 points, 4 assists, 2 steals, 2 TOs. He'll get better once he figures out more holes in the Dallas defense.

2 - Tim Duncan. Sure, Damp and Haywood jumped over him for a ton of rebounds, but playoff Timmeh can still score with the best of 'em. His turnovers (6) killed us though, so he has to improve on that next game. 27 points, 8 rebounds, 6 TOs.

1 - Manu Ginobili. Like Tim, he had a bunch of TOs but was able to make timely buckets along with Tim to keep us within striking distance. I kind of get the feeling that he still has so much more to offer in this series. I hope I'm right. 26 points, 6 assists, 4 rebounds, 5 TOs.

Feel free to vent out your ire in the comments section, or point out other things that I'm sure I missed out on. Recapping a loss is tough as hell.