Dallas in the Crosshairs

Share All sharing options for: Dallas in the Crosshairs

As a Spurs fan, I go out of my way to avoid any news about Dallas. In my opinion, all news is annoying news when it comes to the Mavs. Even if the news is about them struggling, I still find it irritating. I simply cannot stand the Mavs. This led me to the thought, maybe there are more Spurs fans like myself out there who will be walking into this series somewhat blind. If you have been ignoring the Mavs, or if you enjoy a good Mavs bashing, follow me across the jump. (What follows is mostly a collection of my jaded views of the Mavericks. If you are looking for hard hitting facts, look somewhere else.)

In their last 15 games, excluding the recent "Eff You" game (more on this later,) the Mavs were 9-6. Against teams that are playoff bound, the Mavs were 3-4 during this same time-span. Fairly underwhelming, right? My sentiments, exactly. It is true that the Mavs have won four in a row, but the only quality win was against the injured Blazers. The other three, Grizzlies, Kings, and Clippers, do not count in my book. In the Spurs last 15 games, they were 10-5, 6-3 against playoff teams. Now, obviously back to backs and injuries have had some effect, but let's not get lost in the details. The point is that the Mavs are in no way red hot heading into the playoffs. If anything, one could make the case for the Spurs having more momentum heading into the post season. (Yes, I am ignoring the Mavs' 13 game winning streak. Bite me.)

The Mavs will likely use Shawn Marion to defend Manu. Shawn Marion has recently struggled with an injury to his left oblique muscle, but apparently he's perfectly fine according the ESPN Dallas' Tim MacMahon. "A highlight-reel dunk erased any doubts about Mavs F Shawn Marion's health." Really, Tim? That's funny. I was under the impression that the oblique muscles rotated one's torso as they were contracted and relaxed. I didn't realize the oblique muscles affected your jumping or ability to catch and dunk a ball. Oh right, you're wrong and I am being facetious. Basically, Shawn's health should still be in question. His ability to stay in front of someone as shifty as Manu will be jeopardized by a strained, or as sometimes reported slightly torn, oblique muscle. Keep an eye on this as the series progresses. This seems like something that could get progressively worse over the course of a grueling seven game series. By the way, he went 3-13 for 8 points against our JV team. Not looking so healthy now is he, TIm?

The Mavs made a trade just before the deadline in which they acquired Brendan Haywood and Caron Butler for Crazy Josh Howard. There were others involved, but they were inconsequential. This trade was hyped as a brilliant move by the Mavs. People were comparing it to the Lakers' theft of Gasol. Everyone needs to collectively slow down on this trade. So two starters from a horrible team in the uncompetitive Eastern conference are supposed to elevate the Mavs to the finals? If Butler and Haywood were really that good, why were the Wizards such a miserable basketball team? It's simply illogical to think two good players on a horrible team in a horrible division are going to be the difference makers. As a Mav, Butler has averaged 15 pts, 5 rbs, and 2 asts shooting 43.5% from the field in 34 minutes while Haywood has averaged 8 pts, 7 rbs in 26 minutes. Ian. Huge Ian.

In the "Eff You" game, Butler went for 20 points, 5 rebounds and 2 assists. That's about as good as Butler is going to play. In the Mavs last ten games, he scored over 20 points just once, against Memphis. Haywood managed to grab 15 boards and score 8 points, but he was going head to head against our 6'7" big man. He watched as DeJuan Blair followed his Rookie All Star Game performance in Dallas with another monster 20, 20 game. 15 rebounds is not as sweet when you let the guy who is half a foot shorter grab 22 boards.

Jason Kidd's rotting corpse still runs this team. He is slow and nonathletic but has improved his 3 point shot and can still pass with the best of them. He really epitomizes the Mavericks. Soulless but annoyingly good. This is the guy that the Spurs guards need to punish. In years past, the Mavs would hide him on the defensive end by assigning him to Bruce. But the Spurs are a different animal this year. There's no where to hide, Kidd. The Spurs will need to dominate this match-up in order to win the series.

Let's see, what else? Dallas' best player is a 7 footer who would prefer to post up a point guard 25 feet away from the basket, shoot a fade-away and sell the touch foul rather than venture into the paint. See what I mean? Annoyingly good and soulless. Also, he was engaged to the female version of Ron Artest. (Oh wait, maybe that's that's a better description for the Lamar's Kardashian now that Artest has his own reality TV show. Hmm.) 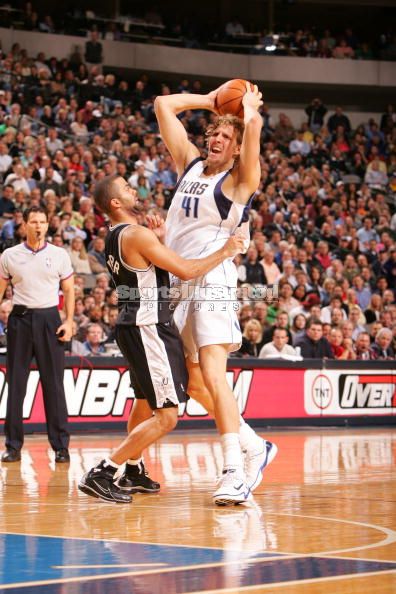 Annoyingly good, soulless guy number three on the Mavs roster has to be Jason Terry. Let's take a step back from basketball and talk about life. Jason, you were born in 1977. You are nearly 33 years old. Isn't it time to stop playing airplane on national TV? Give me Kobe's Badger look. Throw a few MFs at the camera like Garnett. Wag your finger like Dikembe. Give me a Jordan fist pump. Of all the annoying celebrations out there, you decided to go with the airplane? You know what? Never mind, Jason. You deserve the Mavs and the Mavs deserve you. 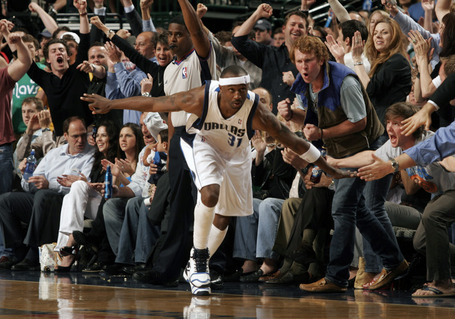 Jose Barea and Eduardo Najera. Two of the most irritating people in the NBA. They flop, they have ugly games, and whenever they score it feels like a stomach punch. If Mark Cuban played in the NBA, I guarantee his game would resemble these guys'. Barea makes me miss our 'Kevin Willis' guy. Our roster this year truly lacks the antagonist. We lack the Mario Elie, Stephen Jackson, Kevin Willis crazy guy element. We lack the guy that would knock Barea so hard into the ground on his first drive to the basket that the paint would rub off on his jersey. I miss the 'you never know' guy. 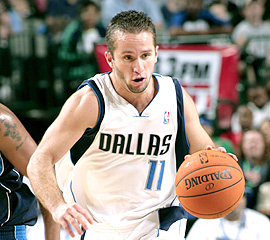 Seriously? This guy? Hit him, Keith.

Keith, if you are reading this, you have all the qualifications to be that guy for us. You bring little to nothing to the table. You are built like a tree trunk. You are inconsequential to the point that if you got ejected, it really wouldn't hurt our chances of winning. Keith, please knock Barea out of the series. Thanks, Fred. +100 if it happens. (FARS for Tim C.)

So that's basically all you need to know about the Mavericks. They are annoying and soulless. Also of note is that they are terrible at putting teams away. While they are obviously the 2 seed, their average point differential ranks them 8th in the West. You got a little taste of that the other night. We played our freshman B team and they could not put us away. This should mean that we will have plenty of opportunities to steal one of the first two on the road.

Allow me to close with my thoughts on the last game of the season. It was a big 'Eff You'. Simply stated, if the Spurs did not want to play Dallas, we would have gone all out for the win. Instead, we sat our two best players and only gave Parker minutes because he is coming off of an injury and needs to get into game shape. It really is the biggest 'Eff You' the Spurs have ever given. Pop basically told the Mavs, "We are not scared of you. In fact, we want to play you because we know we can beat you. Have fun struggling with our JV team tonight."

ESPN analysts have attempted to explain this away. The headline on ESPN was, "The Spurs' Mixed Message." It was a mixed message to everyone except the 30 players that matter. I guarantee the Spurs and the Mavs all received the message loud and clear. The Spurs were given a confidence boost and hopefully some doubt entered the Mavs' psyche. The Spurs have the momentum. The Mavs have not faced a healthy Spurs team in two years. This time, the Mavs are the ones limping to the finish line. Shuffle up and deal. Spurs in 6.