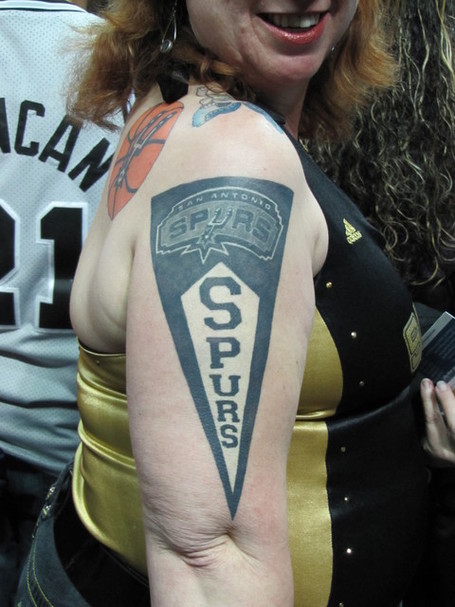 There was a party atmosphere at the AT&T Center for the last regular season home game. People were outfitted in full Spurs regalia, and the Fan Shop was doing a brisk business. Before the game, I spotted this woman with three large Spurs tattoos, not quite worthy of Chris Andersen of the Nuggets, but . . . I leave it to you to judge. 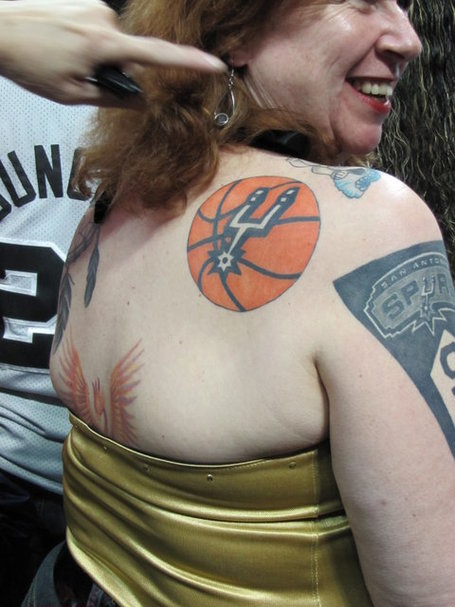 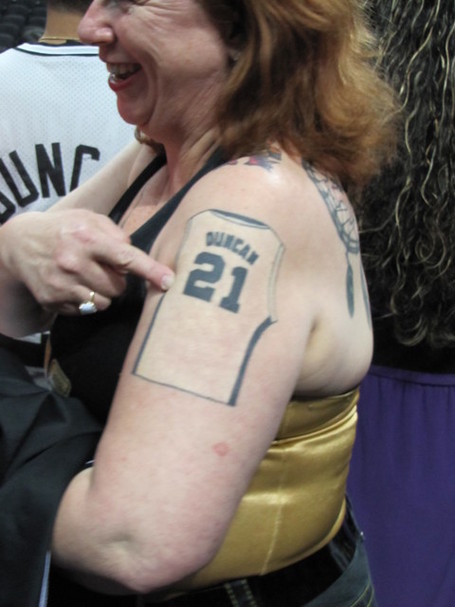 My buddies on the security staff were curious whether the tattoos were real, so I struck up a conversation with the woman. They are real. This one of Tim's jersey is three coats of white ink - ouch! The lady is from California and loves the Spurs. I say get her a ticket if we face the Lakers and sit her next to Jack Nicholson. She wanted Tim to autograph her arm, but he had finished his warm-up before she was admitted to the arena. 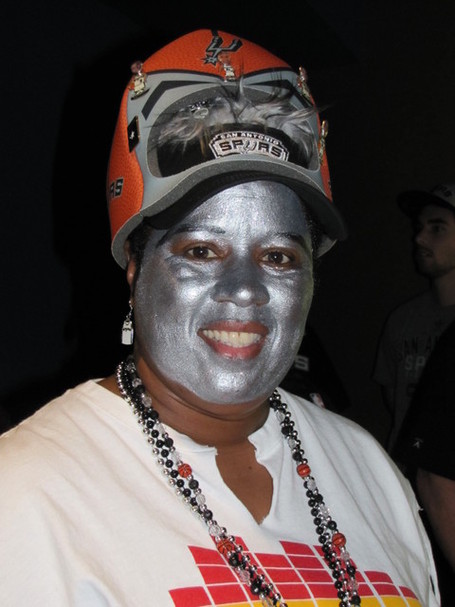 This woman is part of a spirit group that sits in the upper level of the arena and was chosen for it by the Spurs because of her wild and crazy spirit. 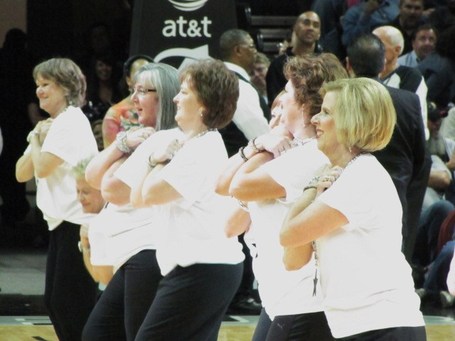 This group of fun-loving ladies is called the Sterling Silver Dancers. They were really enjoying themselves, and their routine wasn't bad, considering the limits of arthritic joints. The crowd loved them. No, I will not get a tattoo, paint my face, or dance on the court, unless it's a tango with you know who. But if it's ever Karaoke night, look out! 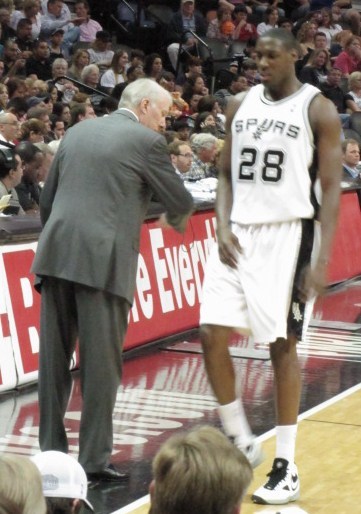 Ian about to get the manly "butt slap" from Pop upon exiting the game. 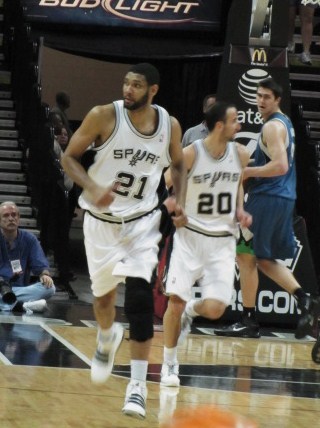 Savor the moment - it doesn't happen often: Tim sprinting down the court! He sat the whole fourth quarter, and took off his knee brace. (and I'm still messing with the settings on the camera for action shots, but I think I have the problem figured out for the next home game) 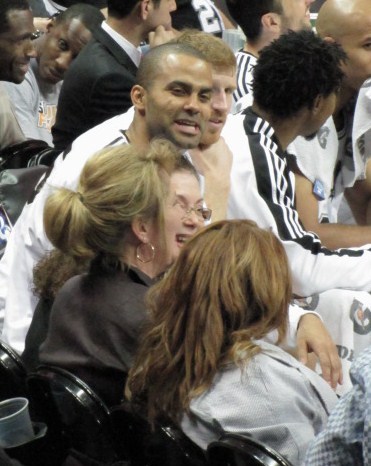 In the 4th quarter, Tony entertains the women who sit near the bench. Bonner seems to be thinking "Eva's not gonna like this." 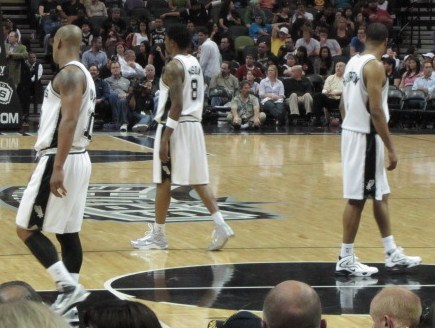 "Okay, guys. Fan out. I hear Peter Holt's looking for that No Manu, No Renew lady, and Manu refuses to name names." 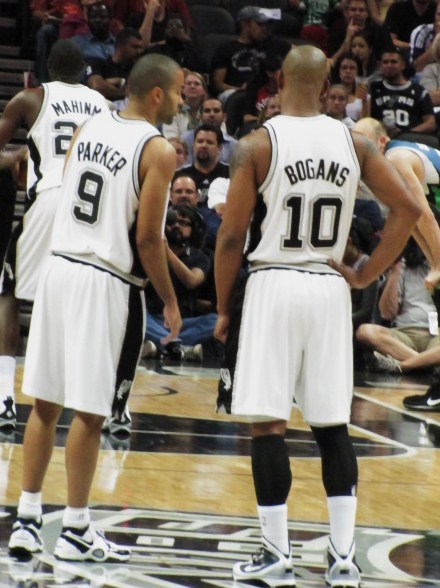 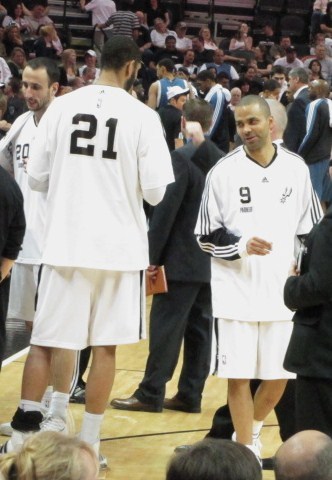 Boredom began to set in late in the game. Timmy and Tony played a game of keep-away and danced around a little. Note - no brace on Tim

And finally, I just like this photo of Tim - smiling! The bench was having a good time and the comraderie was very evident, more so than at any time I have noticed this season. 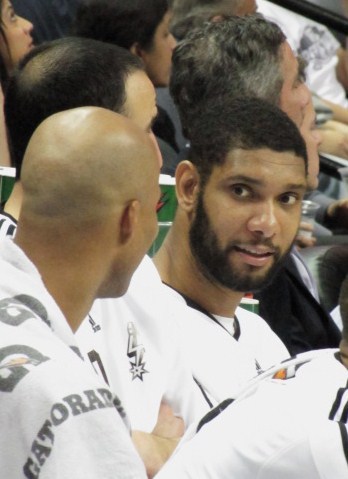