Come inside to find out what could happen....

First, the Lakers will play the Thunder in the first round. It is set.

The 6 and 7 seeds are relatively easy. If we beat Dallas (in Dallas) and Portland loses to the Warriors in California, we will be the 6th seed. If Portland wins or we lose, we are the 7. We are likely the 7.

This is where it gets interesting. Clearly, we should be most concerned with the team who ends up in 2nd and slightly less interested (but still) in the 3rd seed.

Okay, I had written more but deleted it and made a chart instead. The odds are based purely on the number of times a team is matched to that seed. Utah and Portland have to be favorites to beat Golden State. Those games aren't 50-50. You can also see Phoenix controls its fate. If they win both of their games, they get the 3 seed. 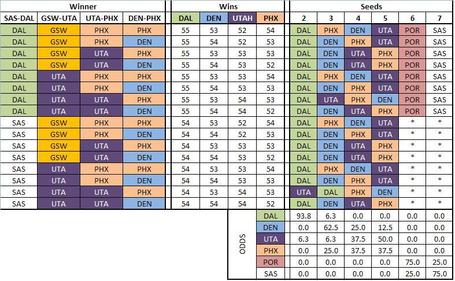 * If Portland loses to Golden State, we are the 6.

It is highly likely we play Dallas in the first round independent of the outcome of our game.

Our ideal Spur scenario would likely be:

2. Phoenix or Golden State must beat Utah or Denver must beat Phoenix to ensure Utah is the 4 or 5.

3a. You want Denver more than Phoenix: Denver must beat Phoenix or Phoenix must lose to Utah.

3b. You want Phoenix more than Denver: Phoenix must win out.