Not All Shots Are Created Equal

Share All sharing options for: Not All Shots Are Created Equal

It's been a long time coming, now I'll explain what I do to "watch" a game. It's the ATS shot charting system explained.

The first game I attended as a media type was the Bat Manu game against Sacramento. The great story of that evening -- the genesis of the George Hill Ninja Bot costume -- has not yet been told publicly, but I will say that it had Graydon dying laughing. Other interesting things happened as I learned on the fly. When I first went into the media room, I started checking things out. As LatinD mentioned is his travelogue, they have lots of handouts and paper for you to peruse. One of the handouts they had on my first night was a 3x3 of half courts. Presumably for charting things and taking notes. I picked up a couple because I thought it might be an interesting way to keep track of the game.

For that first game, because I figured we'd torch the young Kings team on offense, I decided I would track where the Kings shots came from on the court and who took them. Once the game started, things quickly got out of hand. I needed to differentiate between makes and misses. I needed to track shots where players were fouled. Oh, and what about turnovers? Ok, now an offensive rebound. Is that on a new half court diagram or on the same one?

I ended up with a pretty nice little system. Mark the player number where the shot was taken. Circle it if it goes in. If he is fouled, draw a line above and below. Mark the free throws, like 1-2, in the bottom of the box.

One of the really good things that became apparent very quickly was that I could see trends very easily. Look at this shot chart from the start of the third quarter of the Kings game. From the 4th possession, top right corner, to the 13th possession the Spurs played some terrible defense. When you watch the game, you know its bad. When you look at the chart, you realize just how bad. 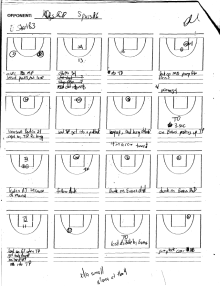 In that stretch of the game, the Spurs allowed the Kings to score on 9 out of 10 possessions. The one "stop" was a three second call on the Kings. However, you can't chalk this stretch up to the Kings "making shots". The first 8 successful possessions for the Kings were all points in the paint and right at the rim. All teams make layups at a very high percentage.

Another abysmal stretch was this one against the Celtics to start the game. 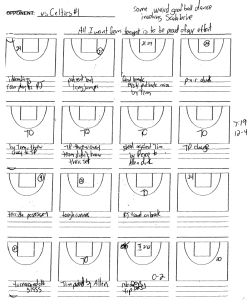 Note the 4 turnovers in a row. The 6 turnovers on 16 possessions. And only 5 shots made. Ick.

As the season has moved along, I have refined my technique. It steadily became smoother and smoother. Even to the point that I could chart the shots while talking to somebody. Then, after the first discussion with Chip Engelland about quality of shots, I added a new attribute. Whether or not the shot was challenged. This resolved down to three separate qualities. Wide open, challenged, or bodied. The bodied came about because of Tim. He takes shots where the guy doesn't have a hand in his face, but to say it was wide open would be silly. It's for when Kenyon Martin is really banging and leaning on Tim as he makes his move, but doesn't get his hands up on the shot. For these, I just mark it with an 'x'. Wide open is 'w' and challenged is 'c'. During the course of the game, for the Spurs offense, you want to see a lot of w's and very few c's.

In the fourth quarter of the Suns game last Sunday, we scored 36 points on 23 possessions. We scored on 17 of 23 possessions. Over at Bright Side of the Sun in the comments for the recap, I found a couple of interesting comments. One was that Hubie Brown admired the Suns defense. The other was that the Suns played good enough defense to have a chance to tie.

I keep looking at my chart and I can't find it. In fact, I see what might be the worst defense a team can play. Let's examine. 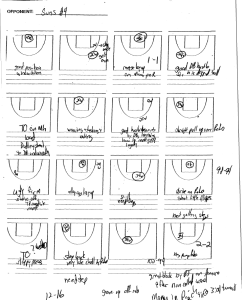 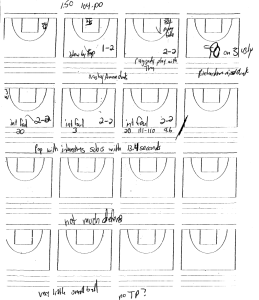 For the quarter, the Spurs shot exactly 3, yes 3, challenged shots. All three were in the paint at the rim. Two by DeJuan and one by Tim. Possessions: 1,3, and 12. Every perimeter shot the Spurs took in the quarter was unchallenged. On those wide open jumpers the Spurs shot 8-15. Or 53.3%. I'd say the Suns were lucky the Spurs didn't make more shots. Of course, part of playing good defense is getting your defensive rebounds. How did the Suns fair there? Not so good. The Spurs got 4 offensive rebounds. Possessions 2, 7, 10, and 21.

About the only thing you can claim as positive defense for the Suns were the Spurs three turnovers. Possessions 5, 13, and 20. The turnover on possession 5 was a nice steal by Dudley. If he hadn't got the steal, DeJuan Blair would have had an easy two points because the Suns lost track of him and he was standing under the basket all alone. My verdict. The Suns played terrible defense.

But hey, that's just one idiots opinion. Why don't you print out your own shot chart, chart your own game, and draw your own conclusions. Behold the official PtR shot chart. 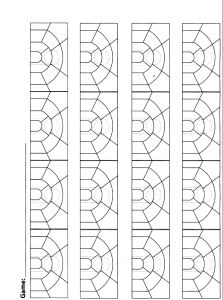 You know you want it (click for the pdf)