Even though Cleveland has been killing it this season, the ball is still round for every game. And Manu Ginobili, when completely healthy, can still take over crucial 4th quarters. All in all, a great win.
I have a surprisingly easy take home exam that I still have to breeze through, so only a short recap is in order.

"The hell... you just dunked on that last play, Matt. Explain yourself."

Defensively, we were able to do a good job of shellacking the Cavs, limiting them to only 20 points in the quarter. Pop decided to roll the Dice early and the risk paid off - SAM buried a few jumpers and Youngevity was in vogue again, even if for a few minutes.

The Spurs got Jamisown'd during the 2nd quarter where he probably scored 18 points of his 24 total. Sean Elliott kept on yapping about Antawn hitting the jackpot, moving from sad sack Washington to the King's Court. Defense so far was pretty much MIA again, and the Cavs looked like they were toying with the Spurs. Then Manu and Timmeh go out so the PtR faithful collectively quack in their boots for the impending blowout.

But then the bench surprisingly hold their own even if Roger Mason sucks at life, and we finish the half within striking distance, down only by 5, 45-50. Jamison goes back to the locker room, reclines on a chair, lights a cigar and says "life is good" while blowing a smoke to Varejao's face. Sideshow Bob, by the way, would not return after suffering an injury. Yayers. 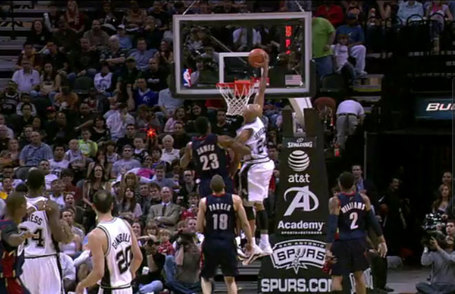 This will have to do until we get video or a better copy.

(credit goes to srf for the photo)

So much win. First, Richard Jefferson finally has his first Spurs poster, with LeBron on the receiving end. Woah mama. Timmeh also came alive after a couple of subpar games, asserting his will on the young JJ Hickson., and even did his best Magic Johnson impression - leading the break and then finding an open RJ for the slamma jamma. Bogans hits a three to close the gap at 70-69, end of the 3rd quarter.

In the 4th, it was all Manu on offense, and Manu + Bogeyman on defense. Keith got up on Jamison's grill all half long, shut him down, and then took on LeBron and survived to tell the tale. Matt Bonner tried to do the same and guarded LBJ, and somewhere out there, a living being died.

Manu then turns on SuperNova mode, scoring 15 of his 30 in the fourth. It began with a steal for the breakaway dunk while inadvertently elbowing Delonte West to the face, almost triggering West's bipolar switch. Whew, that was close. The next few sequences looked like this: Manu layup (Bonner with the assist), assists to Blair for a dunk, GINGER DUNK, Manu three, then Bogans three. Thank you ESPN play-by-play for that.

Defense also seemed to rear its defiant head as the Spurs packed the lane, let the Cavs shoot mostly contested jumpers or tough drives, and admirably stayed home on the shooters. Blair had a couple of nice offensive rebounds for extra possessions, and before you knew it, the Spurs had their biggest lead, 94-86 with under a minute remaining.

Suffering from a dearth of quality wins all season long, a few PtR members get too giddy, mess with the mojo's evil twin, ojom, and the Cavs still make a game out of it with botched inbound plays by the Spurs and missed free throws. But, Pop kept Roger Mason, Jr. glued to the bench and it equally resulted in a win. Also, Malik Hairston dunked to close out the scoring. Woopteedoo.

2 - Keith Bogans. 8 points, 2 rebounds, 2-3 from 3-point land. Held down Jamison's hot hand in the 2nd half, drained timely threes and was ice man on the free throw line in the closing seconds.

1 - Manu Ginobili. 30 points, 6 rebounds, 6 assists, 3-5 on threes, took the charges on D and was pretty much all over the court. He just wins at everything.

The Spurs are still breathing, people.We stopped a hot Cleveland team's eight game winning streak. Team stats were pretty much equal with both teams, but we proved to be the steadier bunch and finally gutted a big game out.

There still might not be enough reason to believe we can win the championship, but man. If you don't think we can do some damage in the playoffs, especially with a well-rested TP back in the lineup, then you should wear no pants.