Wayne has given you an excellent written recap of this game. These photos will add a little color.

This young Manu fan says it all: 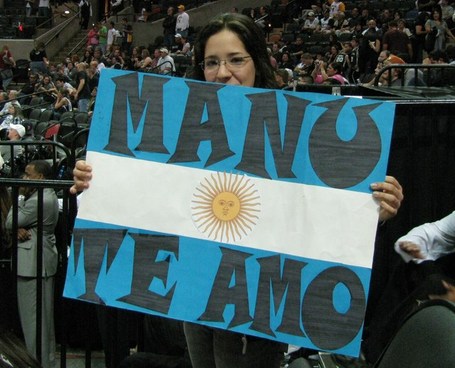 Before we jump to more photos, the Spurs had a special "chalk talk" for season ticket holders after the game last night. Ron Johnson, Sr. VP for Referee Operations for the NBA spoke until around 1:00 a.m. (a good way to wait out the rainstorm). You stats guys would have loved it. He talked about how the officials are evaluated each game and displayed various charts and graphs (no copies made available). To sum up what he said, the league establishes a mean number for different types of calls (travelling, defensive 3 second, etc.). Any officials who deviate too much from that mean (high or low) are "flagged" and notified. He said the purpose was to keep the game consistent throughout the league. I did notice on his graphs for the last few seasons that the number of calls of all types seems to drop as the season wears on, though not significantly. He prided himself on the fact that the refs are making the right calls over 95% of the time. Videos of every game are scrutinized by the league, and improper non-calls are also noted (do I believe this? No). He also said refs spend time on game day looking at videotapes of each team to watch for "tendencies" and "match-ups." Of course, the best part of the talk was the Q and A. One woman thanked him and them proceeded to say that Spurs fans looked at the crew for the Lakers game and knew we didn't have a prayer! She was relentless in her attack, and Sean Elliot was behind Mr. Johnson agreeing with every word she said!

First, the GOOD stuff: three pretty shots by Manu, one over Lamar Odom in the first quarter . . . 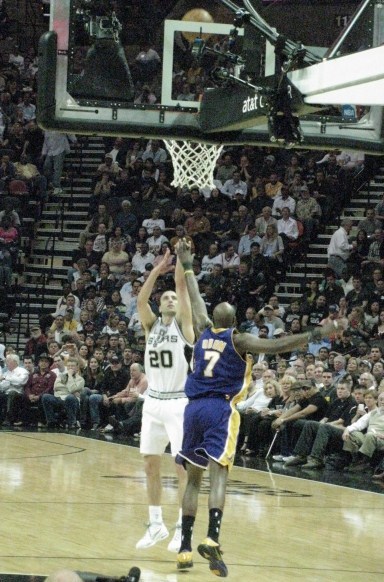 Another shot in the second half, this one I believe over Fisher. . . 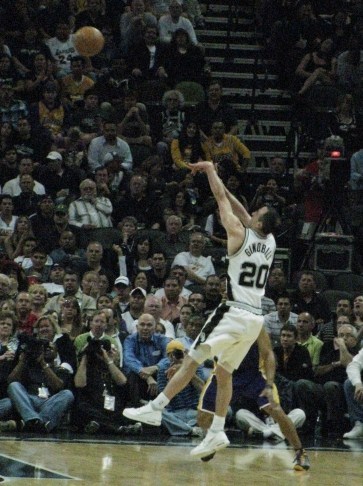 And a third in the second half, this one between Kobe and Artest . . . four Lakers victimized. 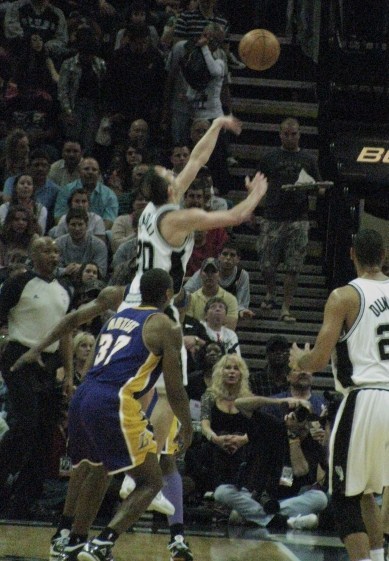 And now for some defense against Kobe, and it's one on one, guys. . . 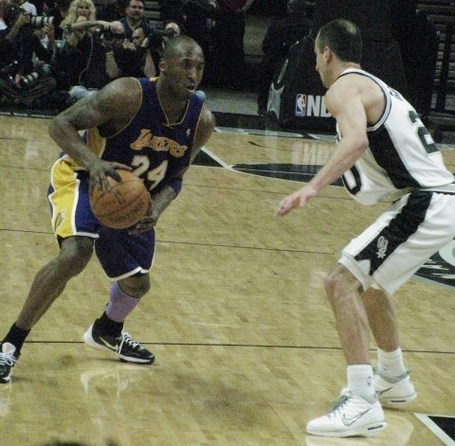 I love this next photo - the concentration and competitiveness, and the respect. . . 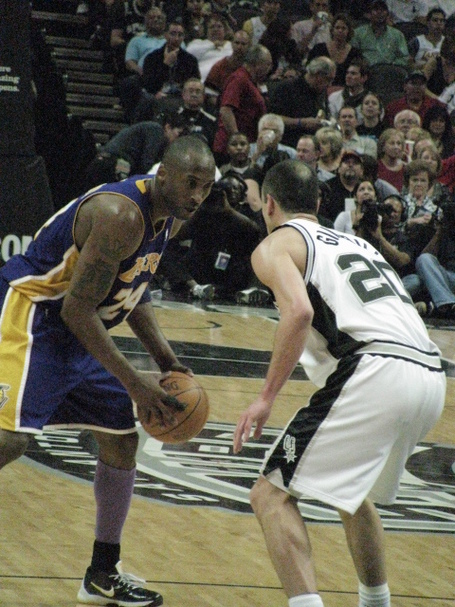 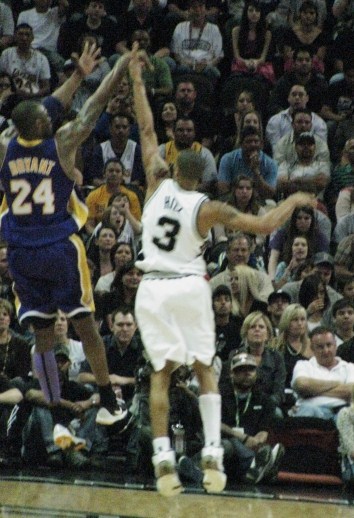 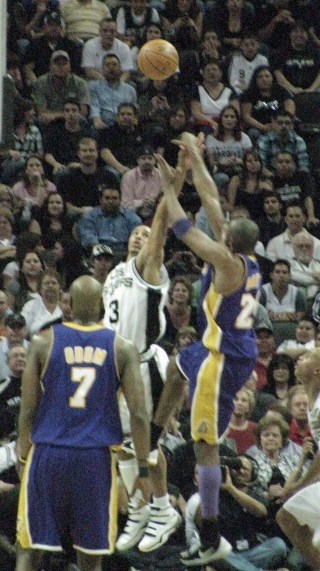 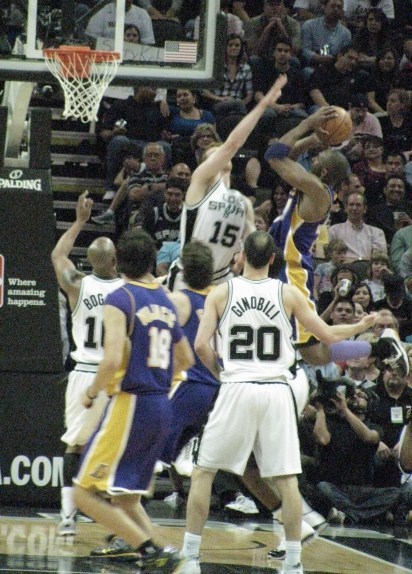 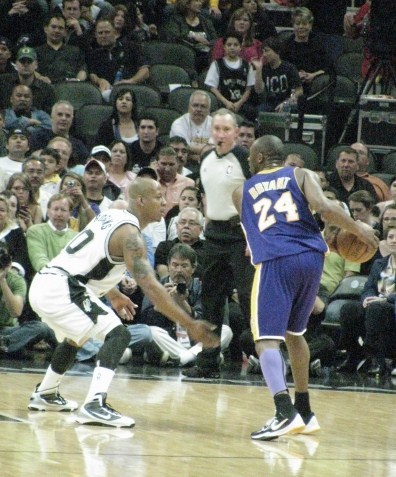 The Lakers also played some defense: 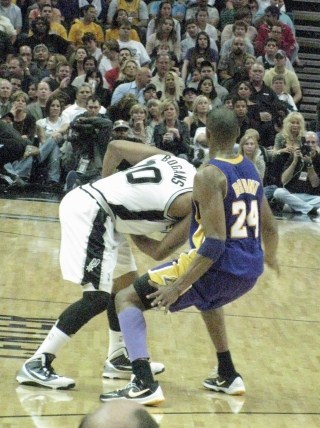 Kobe on Manu. . .but why the smirk, Kobe? It's not like you owned him. 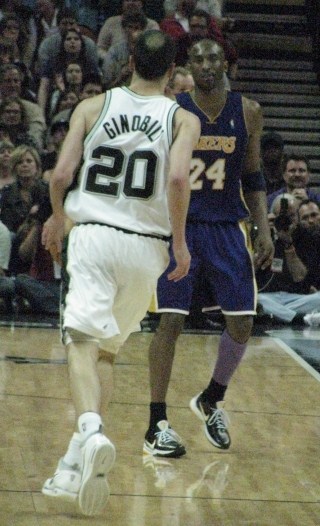 No smirk, no swagger, just concentration on Manu's part, looking for the opening. . . 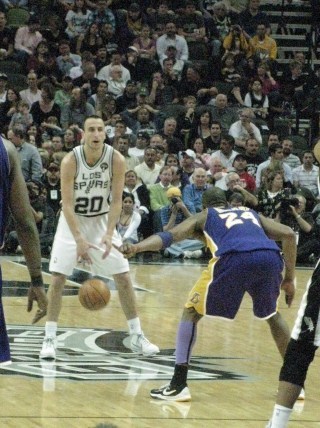 Remember the battles between Sasha Vuyacic and Manu in the 2008 playoffs? One of my favorite moments was when Manu fired off a three, practically from Pop's lap, with Sasha inside his jersey. Or this one, in the next game of the series, when Manu slaps Sasha in the face. I was hoping for another such moment tonight, but Sasha didn't get much closer than this . . .manu v. sasha 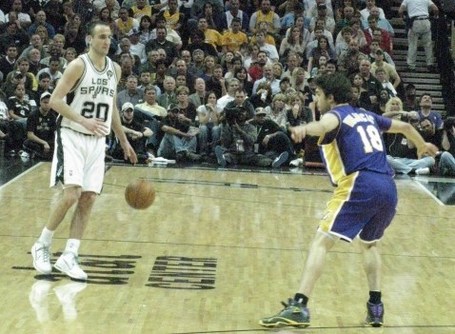 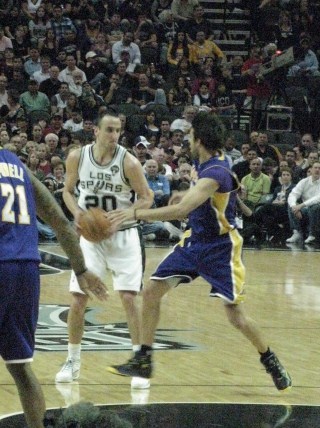 Neither Kobe nor the Laker fans liked this emphatic call of a foul by Kobe on Manu, but the Spurs fans are smiling! 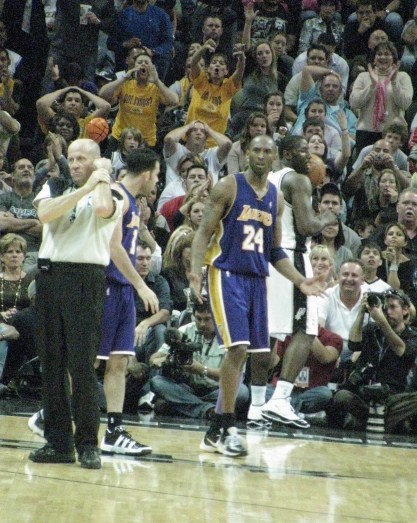 Gasol v. Duncan: sadly you won't see any of this in an end of the year Duncan highlight reel. . . 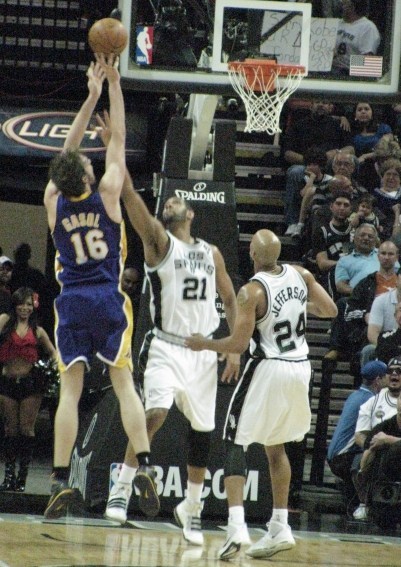 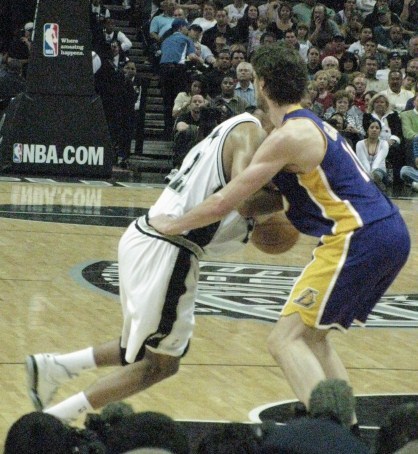 Roger finds a way to make three points, at the free throw line. . . 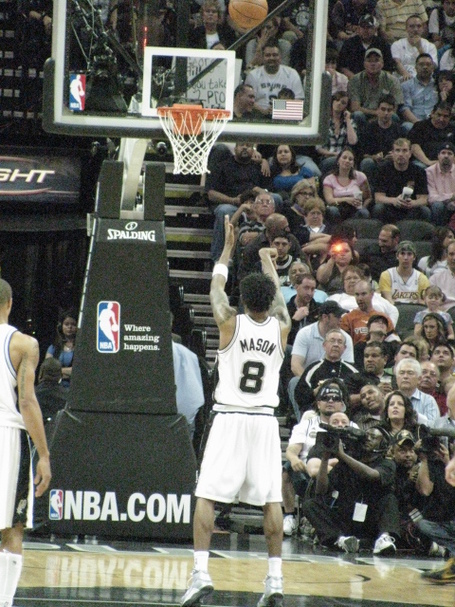 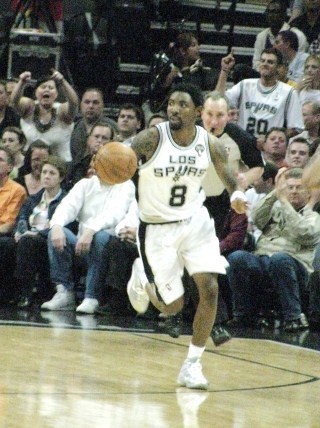 Gasol can dribble, too! A rare thing to see him even near the perimeter, but guess he is practicing his skills so Kobe will give him more touches. . . 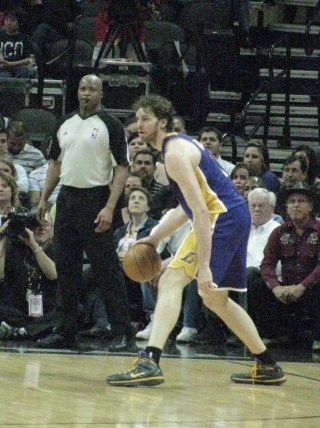 Derek Fisher discusses a call with the ref - Derek, I hope your negotiating skills come in handy as president of the NBA Players' Association when the new collective bargaining agreement is being negotiated. 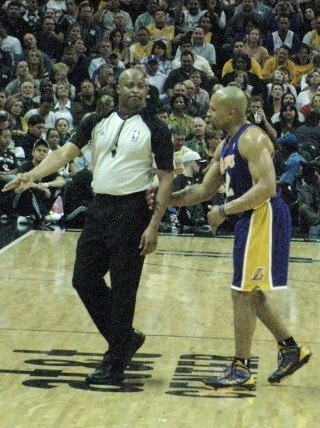 Finally, you don't even want to know his thoughts, whether they be in Spanish, Italian, or English, as Manu sits to take a breather in the fourth quarter. Too bad Supermanu can't play 48 minutes. 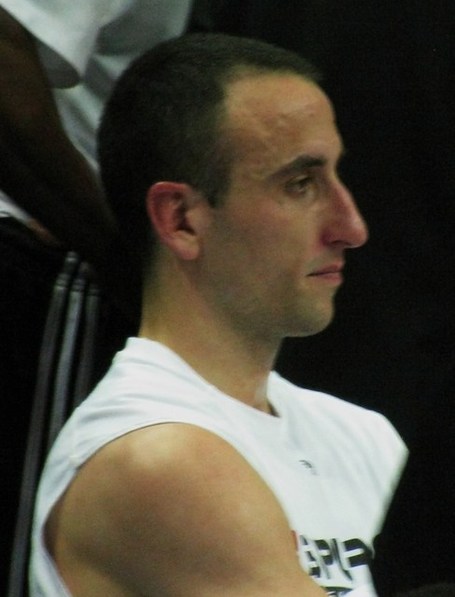