The Spurs 147 points scored against the Warriors was the most scored by a Popovich-coached team, and the most since the Spurs scored 140 in a win over Dallas in 1991. The bench was happy and relaxed during the fourth quarter. 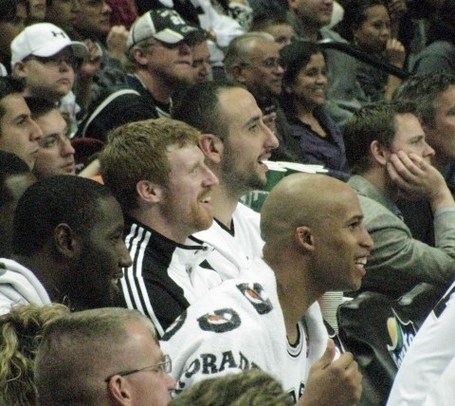 After the game I visited with Spurs' broadcaster Bill Land. I complimented him on the excellent interview he and Sean had done with Manu after the Miami game. He said that was all Manu, that he is an easy interview. He then went on to voluntarily speak in glowing terms about Manu: how he is the "epitome of what an NBA player should be as a role model," not only for his performance and leadership on the court, but for how he acts in the community. I said, "I just hope the Spurs resign him, and soon," and his comment was that they "can't afford NOT to sign him now. If they weren't going to resign him, they should have traded him. And with his play lately, there is no way they can replace his skills." I think that makes me feel better. 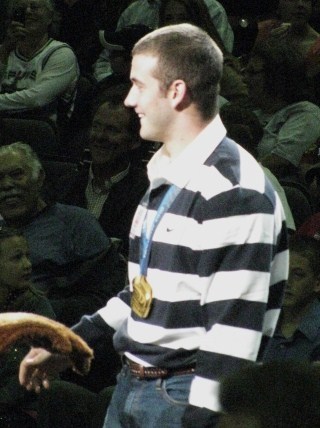 In attendance was San Antonian Justin Olsen, recent Olympic gold medal winner in bobsledding. He was introduced during a timeout in the first quarter in what turned out to be a diversion. While the crowd was giving him a standing ovation, Warrior's coach Don Nelson was receving two technicals for arguing a foul call and being tossed from the game. 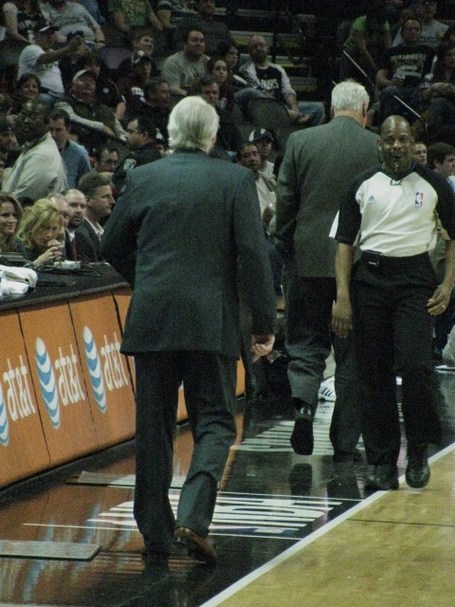 "Nellie, wait up! There's a nice bottle of Merlot in my office. I might join you later." Popovich and Nelson are old friends from Pop's days as Nellie's assistant. 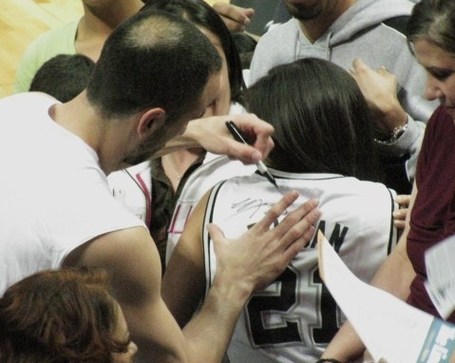 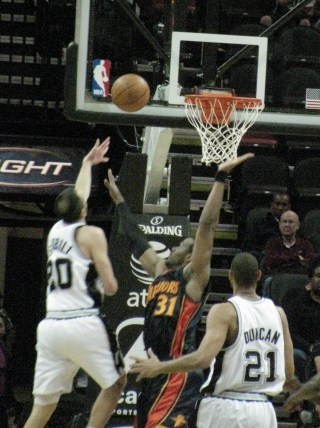 Manu drops in the last of his 23 points, 21 of them scored in the first half. He would have a double/double, with 11 assists, in only 22 minutes of play. 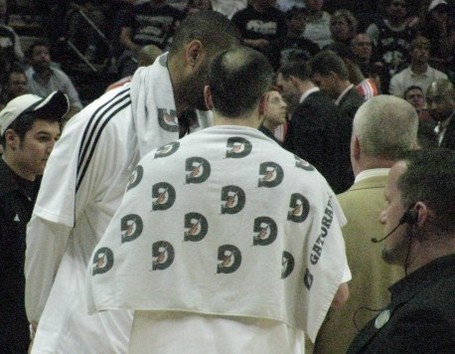 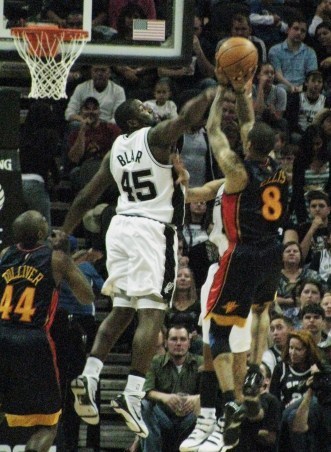 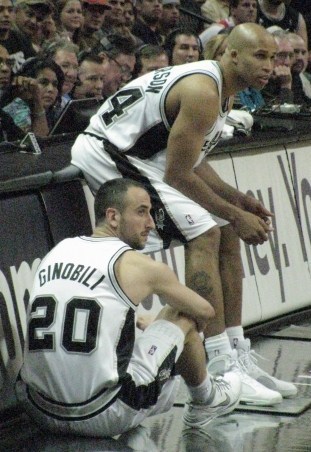 The Spurs' "Butch Cassidy & The Sundance Kid" duo, or is it "Pancho and Lefty", (okay, Peanut and Lefty) wait to check into the game. I love the concentration on their faces as they watch the action. The pro photographers got this same shot from another angle. 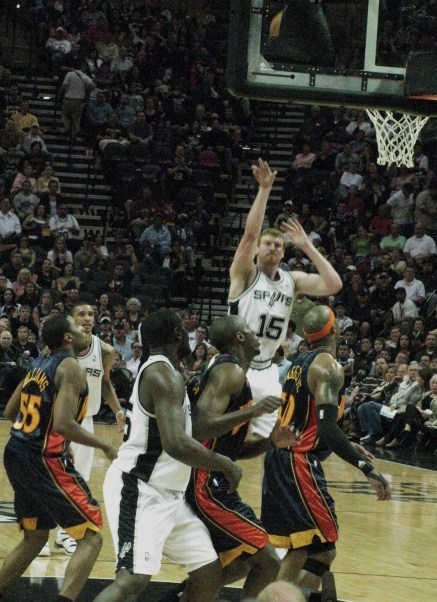 Bonner was a perfect 6 of 6 from the field, 1 of 1 from the stripe, and this was his only 3 of the night., but DeJuan, you are out of step with the chorus line: it's supposed to be right leg forward. 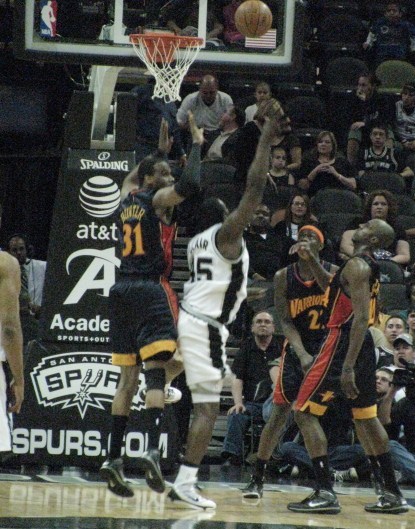 Scoring was easy tonight in a game that resembled a pick-up playground game in the fourth quarter. 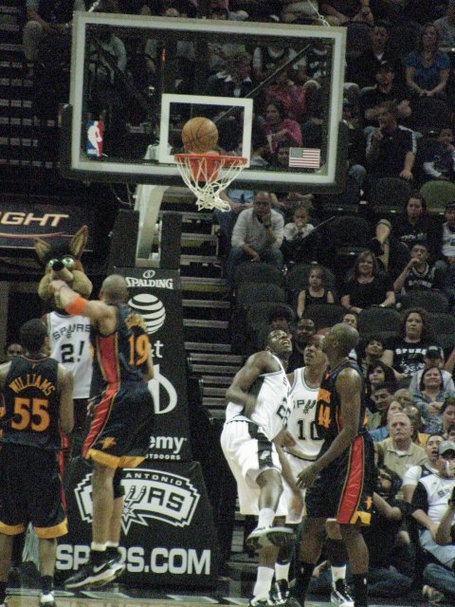 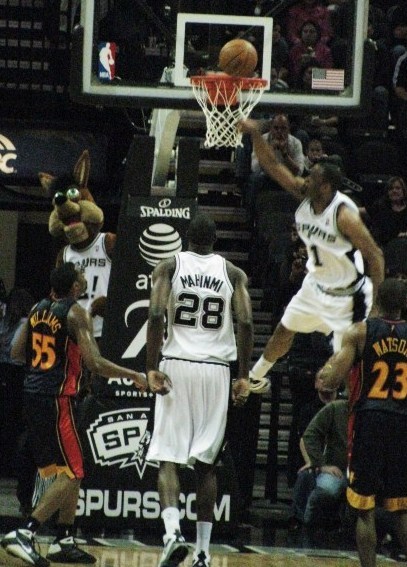 Hairston delights the crowd and the Coyote with this throw down. 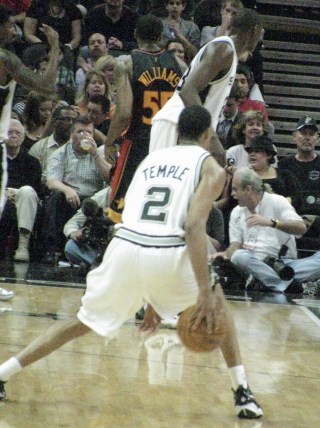 Garrett Temple demonstrates his between the legs dribbling skills in the fourth quarter. 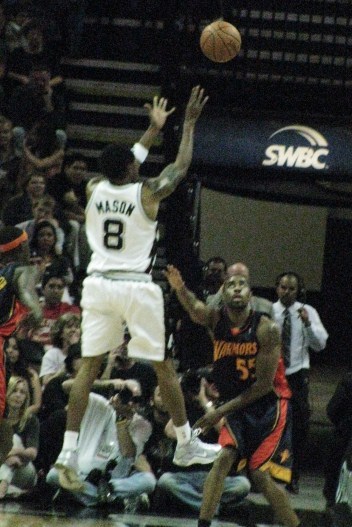 About the only Spur who didn't feast on the Warriors was Mason: 2 of 7, 0 of 3 from beyond the arc. 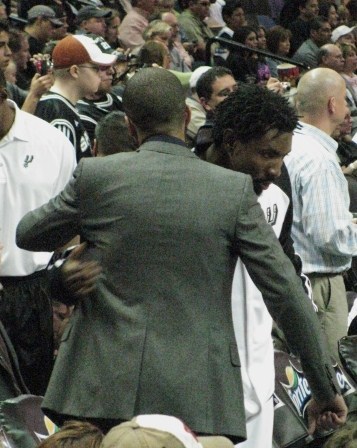 "There, there, Mace - it'll be alright." Tony with a "man hug" for Mason. Actually, Tony only appeared on the bench for the first half, minus the protective bandage on his right hand. 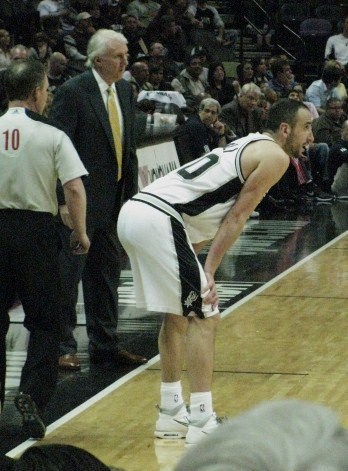 This last one is just for you, Bella. Thanks for the pose, Manu.