I'd like to introduce a new statistic for you. It's the ATS Expected Field Goal Percentage. I made it up. Now, I'll try to explain it, and how I thought of it, and why I think it is interesting. And, why, like all statistics, it is flawed in drawing conclusions from it.

Coach Pop likes to say things like "The other team made shots" and "we need somebody to step up and make shots" and "basketball is a game of making shots". As complex and intricate as the game is, at its essence it is also very simple. You have to make shots. Therefore, there is a lot of value in players who can make shots. We can look at statistics for a game like field goal percentage, adjusted field goal percentage, true shooting percentage, and several others to get an idea of which teams and players make shots.

One thing I have been trying to figure out, ever since Olf put me on the path, is what does good Spurs offense look like in a particular game. If I can't look at a field goal percentage and know, what can I look at? This has lead me to ask a lot of questions and do a lot of thinking. A few of the factors in judging good offense are: balance of points from inside, open versus contested shots, number of assists per shots made, etc. I'd like to add two more.

One, your better shooters shoot more than your bad shooters.

Two, your players shoot from positions on the floor where they shoot well.

It's not that I hate, it's just that I like the mean

Yes, the mean. Also known as the average. For any given game, you can get lucky or get hot or face a bad defense. However, over time the data points add up and you regress to the mean. Or, to make up my own quote, "you are who you thought you are".

Chip Engelland sees a warning sign at half time of a game if the Spurs are making shots at a higher percentage than they usually do on contested shots or are making all their shots from the outside. You might not find your way all the way back to your mean, but odds are you are who thought you are and you will. What is this jibber jabber? Odds are you didn't become a much better shooting team over night. If you shoot 60% in the first half on shots you usually shoot at a 40% rate, then you better think that you are going to start missing those shots. If it isn't this game, it will be next game.

Heading into our 59th game of the year against the Hornets our players are who they are. They've taken enough shots and seen enough repetitions to establish a solid mean. If a player has taken 145 shots from a particular place on the floor and shoots 60% from on those attempts, you shouldn't be surprised at all to see him go 6-10 for a game. It's what he does. If a guy is shooting 40% from the corner 3, you should expect him to go 2-5. It's not a fluke. It's not hot shooting. If a guy is shooting 28% from the top of the key, you shouldn't be surprised to see him go 2-7 from there in a game. It's not a fluke. It's not cold shooting. He is who we think he is.

I needed two things in order to pull this off. One was the NBA.com Hot Spots Charts. You know, these guys: 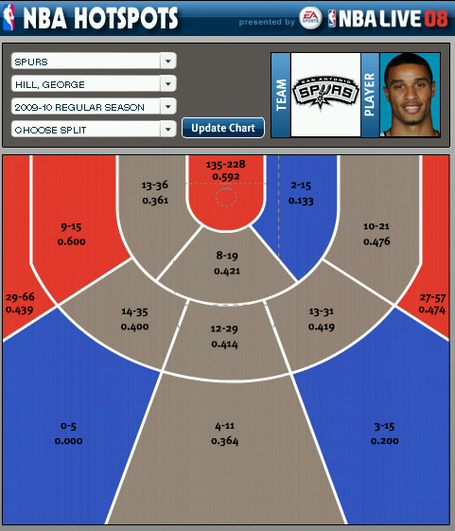 The other was a little help from Mrs. ATS in helping me take my shot charting to another level. She created a shot charting sheet for me that more or less mirrors the Hot Spots chart. The result is that for the game against the Hornets, I can break down every shot to the percentage that player shoots from that area of the floor. Here is the box score for the game.

That's a lot of data there. Let me explain some of it.

Well, the Spurs should have expected to score 73 points on the field goals they took. They scored 88 points on their field goals, so they were "lucky" to the tune of 15 more points than they should have had. Where did those points come from? 3-point land.

The Spurs got 14.5 more points from 3-point range than they should have. Conclusion, we lived by the 3 in this game.

There are a number of deficiencies in this analysis. Like the quality of the shot. But, I think it is as good as any statistic at evaluating an offensive performance in a game and understanding whether we shot well or not. And whether we can expect to continue to have performances like it.

Further, this would be effective for charting the opposing team to determine the effectiveness of the defense. One, did they make shots tonight? Or did we give them easy shots? Two, were we forcing them to spots on the floor where they are good shooters? I think there is a lot of potential here in analyzing any given game.

Here are a couple more shot charts that I find interesting. 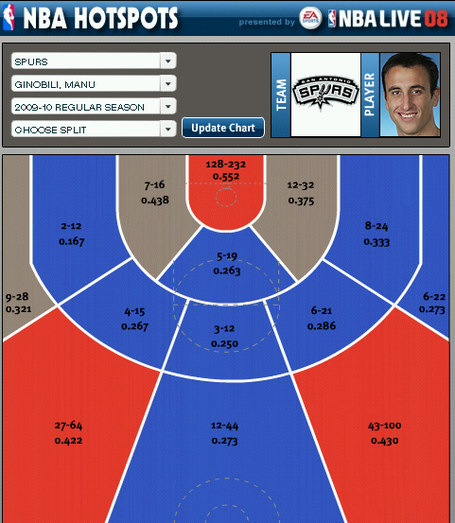 Should only shoot 3's from the wings. 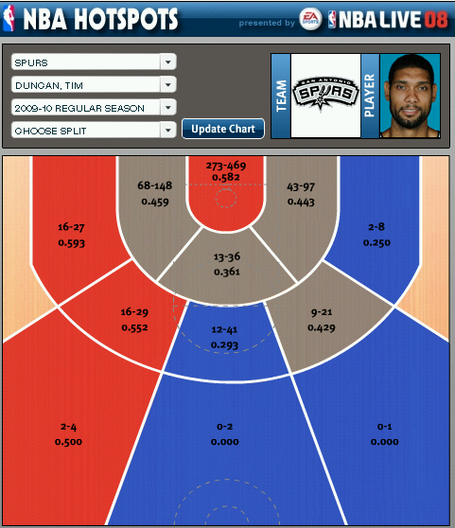 Is the Spurs best shooter from the left side of the court in the long 2 range.