From an Obstructed Vantage Point

Share All sharing options for: From an Obstructed Vantage Point

The Spurs are not tall. The roster seems intimidating on paper, but in practice the Spurs' opponents literally look down on them. To make matters worse, this season Pop has been infatuated with small ball lineups. But just how short are the Spurs? Am I overreacting? How does this roster compare to our championship rosters of the past? Good questions. I'm glad you asked.

If you have been following the site for a while, you may remember this article I wrote about the age of the Spurs. In order to derive a more telling average age for the team, I used a weighted age based on minutes played. For this study, I employed a similar tactic. In order to compare the height of our current Spurs squad to those of the past, I derived a weighted height by minutes played. Basically, my weighted height will have the height of players that play the most minutes count towards the average more so than the height of players that see little or no playing time. In this study, I was not concerned with the height of our guards and forwards, I am distressed that our big men are too short to provide a solid foundation for our team defense. So I only included power forwards and centers in my analysis.

This analysis is important because I feel that our defense is lacking mainly due to the absence of an imposing big man. I seriously love DeJuan's game, but let's be honest. If you were driving to the basket, who would you rather not see waiting for you under the rim? DeJuan or Mr. Robinson? McDyess is only 6'9". DeJuan is listed at 6'7", but come on man, he's closer to 6'5", with heels. So we are missing that big man that alters shots at the rim. In addition, we are missing the big man that cleans up the defensive boards when Tim has to play help defense.

If you walked into a gym right now and did not know anyone, and the guys said you had first pick, you would take the tallest guy available. Without knowing anything else, at least you got a tall guy. The logic being, he may suck but at least he can get in the way and get rebounds. That's how important height is to basketball. At some point, Pop forgot this little tidbit. I blame Avery Johnson. Remember in 2006 when Avery coached the Mavs to the best record in the league and then decided to play a small ball lineup against the Warriors? Small ball is one of those things that is better on paper than in practice; think Richard Jefferson. But enough talk, let's look at the data.

In the charts below, I recap each of the Spurs' championship seasons as well as the current season. I use the data presented to derive the weighted average height by minutes played during the regular season for each squad. I gathered the raw data, the defensive ratings, and rankings from BasketballReference.com. Defensive rating is simply the amount of points our opponents scored during said season per 100 possessions. The ranking is how the Spurs fared each season in relation to the other 30 NBA teams. 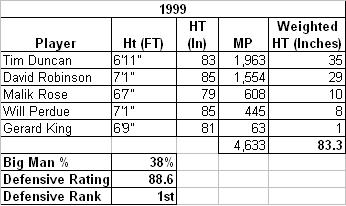 1999. Wow, those were the days. How convenient was that roster? Tim and David played 75% of the 4, 5 positions' minutes. The opposing point guard drove past Avery? Not a problem. Mr. Robinson forced him to alter his shot at the rim. But now we are out of rebounding position, you might point out. Tim is there to clean up the mess, no big deal. Our weighted height was 6'11" 1/3 which led to a defensive rating of 88.6 and a ranking of first in the league. Big Man % is the amount of minutes played by the big men divided by the team's total minutes played. Since 2 of the 5 positions are for big men, one would expect this number to be about 40%, all things being equal. In 1999, the big men consumed 38% of the minutes. 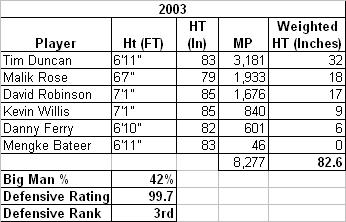 2003. The emergence of Malik Rose resulted in the average height dropping by an inch to 6'10" 1/2. But still, we had two very good 7 footers in Robinson and Willis to crowd the paint. The Big Man % was an expected 42%. 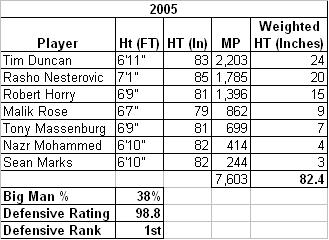 2005. Duncan and Rasho earned the most minutes creating a formidable 6'11", 7'1" duo under the hoop. Ranking first defensively, the Spurs' overall size and savvy allowed team defense to guide them to their 3rd championship. 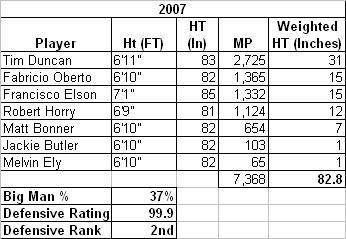 2007. With Oberto and Horry, our bigs knew how to win this season. Those two had what one would refer to as championship pedigree. This team's weighted height was just short of 6'11. Francisco Elson served as Tim's fly swatter. The Big Man % was 37% this season. 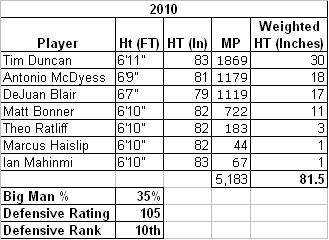 2010, also known as the anomaly. Our weighted height is currently 6'9" 1/2. That's a full inch shorter than our shortest championship squad. In addition, the Big Man % is only 35.2%. This is a direct result of small ball lineups. So, not only is our weighted height the shortest it's been, but we play our tall players fewer minutes. In effect, the 6'9" 1/2 is actually overstating our average height. Our defensive rating and ranking says it all; a defensive rating of 105 and a ranking of 10th in the league are the Spurs worst standings since we drafted Tim Duncan.

I would argue that when Pop claims that our poor defense results from a lack of desire or will, he is being inaccurate. The numbers do not lie and they all suggest that our team was fundamentally put in a position to underachieve on the defensive end. DeJuan has the heart and desire to be a great defender. That's not the problem. The problem is that he is 6'6" on a good day, and he is physically incapable of altering shots at the rim with any kind of consistency.

The Spurs effectively cut Theo Ratliff earlier this season. Theo was the only shot blocker on our roster that was capable of contributing. Until this year, the Spurs always complimented Tim Duncan with a shot blocker and the result has always been a stellar defense. In 1999 there was David Robinson, in 2003 Robinson and Kevin Willis, in 2005 Rasho and Horry, and in 2007 Fransisco Elson. For reasons unknown, the Spurs abandoned this winning recipe and we are now paying the price. The only big men physically capable of being imposing are Theo and Ian. Well, we cut Theo and Ian is incapable of earning playing time. So we surround Tim with undersized power forwards and unfairly expect him to carry the load.

So far, this season can be summarized as 'oversight.' Richard Jefferson was an oversight. Not signing a big man was an oversight. Small ball lineups are an oversight. Allowing Bruce Bowen and Michael Finley to walk were oversights. The Spurs will need their offense to carry them if they are to make a splash in the playoffs. How many times have we said that in the past decade? That, in itself, is an oversight.