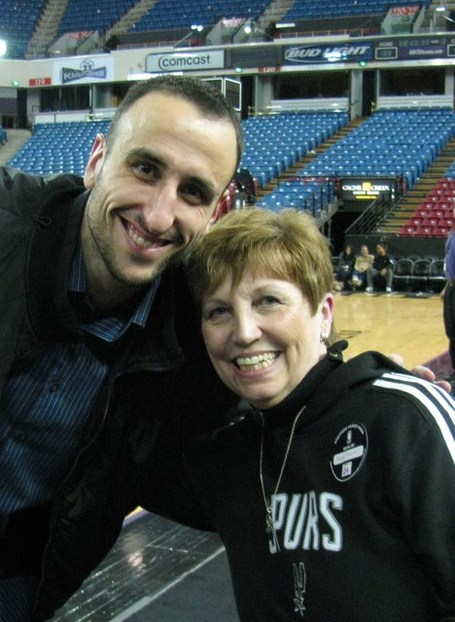 My trip on the first leg of the Rodeo Road Trip was a very enjoyable experience. I'm not going to attempt to rival the brilliant writing of Latin D, nor am I attempting to recap the games. The photos will let you see behind the scenes at the games.

Of course, Sacramento was the most fun, because we won. Yes, after all the photos I've taken, someone finally took one of me! Manu had left a pass to wait for him after the game. I asked him about getting hit in the face again during the game, and he said it was his nose and it would probably hurt for a week. 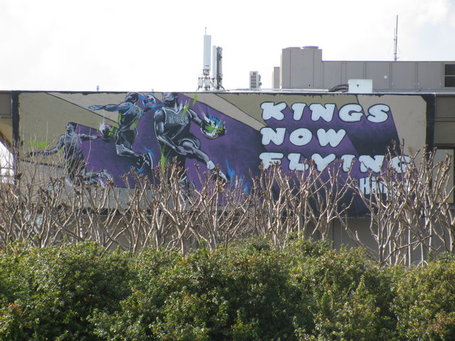 A sign at the Sacramento airport promotes the Kings, but fittingly it is partially obscured by trees. The arena was, at the most, only 70% occupied. 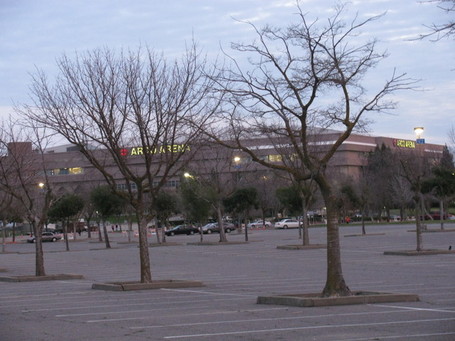 Arco Arena is a nice place. They even had healthy food (chef salad) in their concession area. I was treated extremely well by the staff when they found out I was the guest of a player. I walked over from my hotel (a very nice Holiday Inn Express Suites, by the way) about 6 blocks away, but decided a cab was in order after the game. The Kings staff sent me down to their security area and they secured me a cab. I found myself in the middle of the Kings players at that point, after having visited with the Spurs after the game on the floor level. 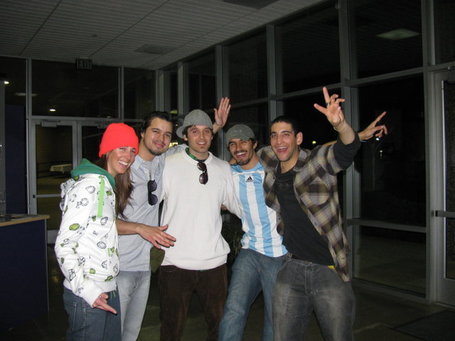 While waiting at "will call" for my ticket to be sent up, I visited with this group of young Argentines who were attending the game to cheer for their hero. They work in the ski resorts in California and return home when the season is over (to work in ski resorts in Argentina since the seasons are reversed). 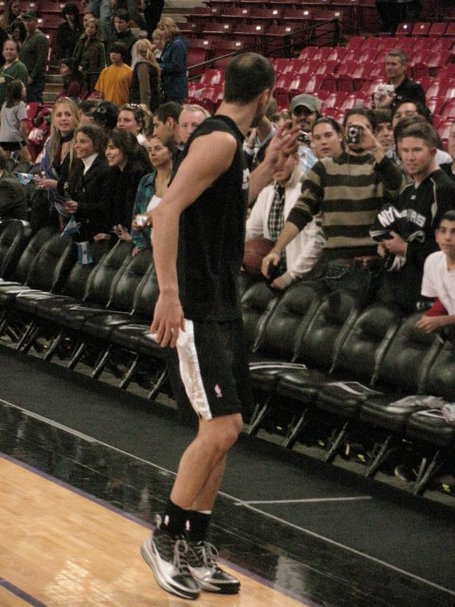 The "Argies" found the place to wait for autographs and Manu joked with them as he finished his warmup. Also, note the cool sneaks on Manu - silver and black. 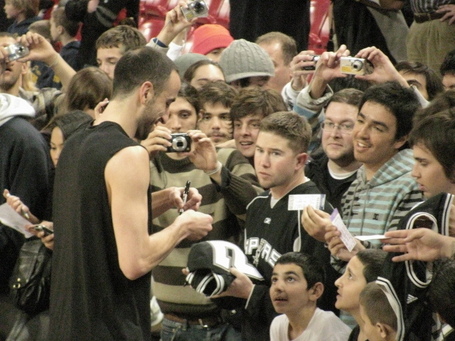 Manu patiently signed and posed for pictures for wave after wave of fans. He smiled through it all and seemed very relaxed. I especially love the expressions on the faces of the two young boys in front of Manu in this shot, but you can tell the older guys are just as thrilled to have such access to their "idolo." Fans would never have this kind of access to a Spur in San Antonio because the crowd would be unmanageable, so it was nice to see it happen on the road. 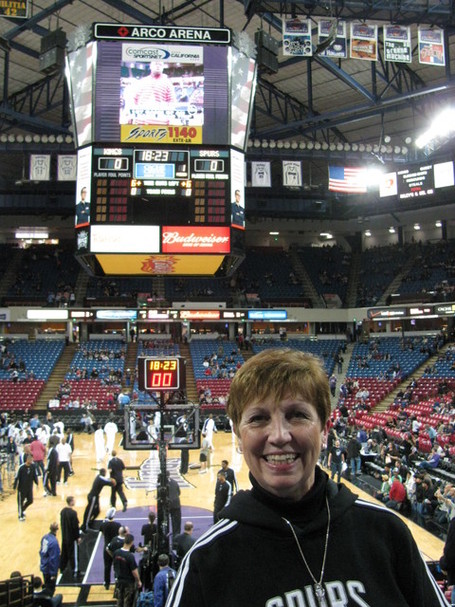 Inside Arco Arena before tip off. Did I feel any intimidation from any Kings' fans because of my Spurs gear? Nope, they were just happy to have a warm body in a seat. 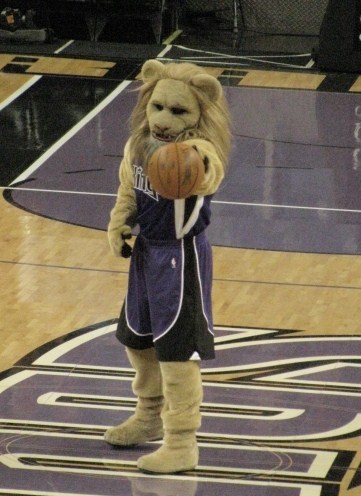 The Kings' lion mascot has a pretty fierce-looking face. He's good, but the Coyote is far superior. More later on the critter who represents the Trailblazers. 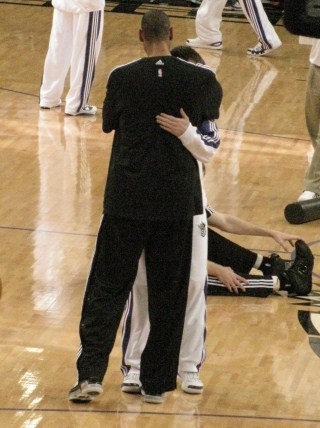 Former Spur Beno Udrih is engulfed by Duncan in a man hug before the game. 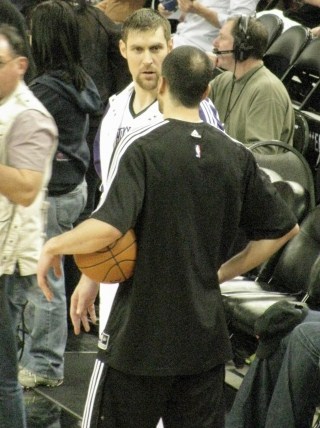 It's required to take a photo whenever two Argentine players get together on the court. Manu and "Chapu" Nocioni had dinner together the night before the game. 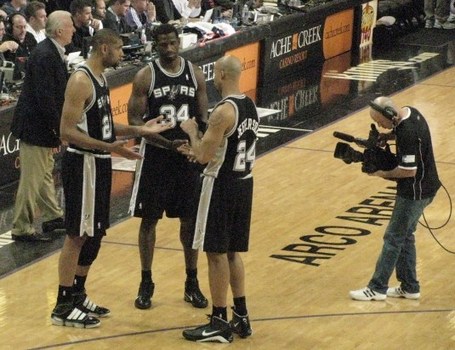 You're asking yourself why did she post this photo of the Spurs talking pre-game. Look at the cameraman - no, I did not photoshop him in - he is really that tiny compared to the players. 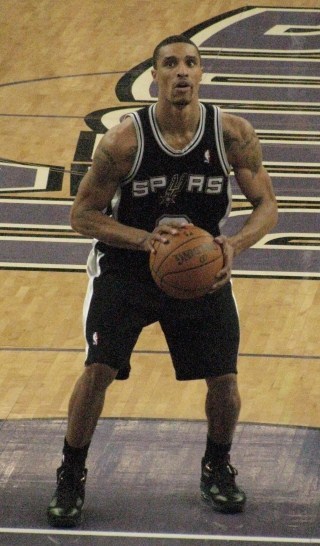 Remember Kurt Thomas and his eyes? George appears to be trying to recreate the look as he prepares to shoot a free throw. 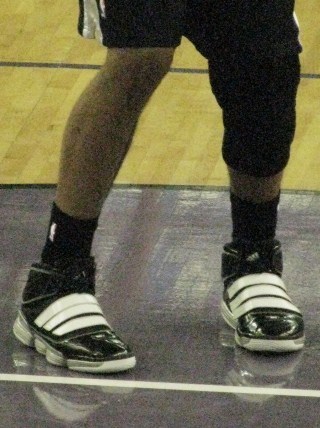 Tim appears to have completely abandoned the skeleton shoes. These are shiny black patent. 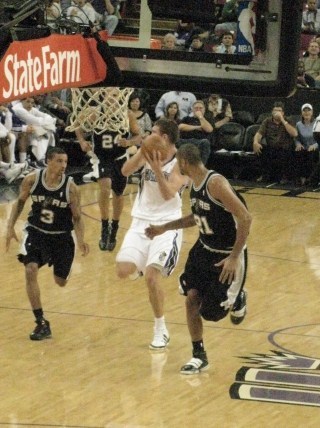 It must be the shoes! Timmy actually caught sprinting down the court to get back on defense! 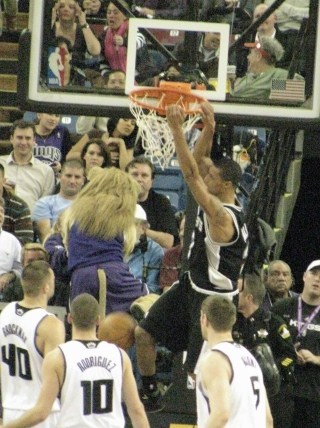 Captured Cubits working on stretching those arms to even longer lengths. 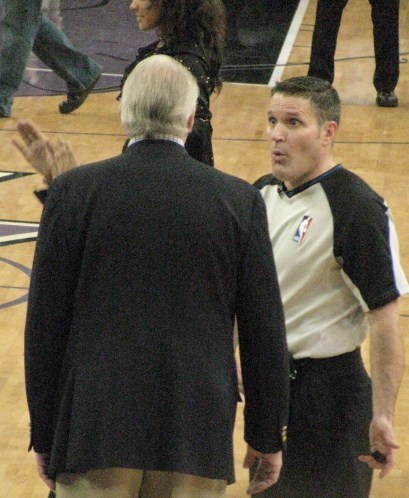 Coach Pop appears to be working on intimidating a referee in preparation for meeting up with Zarba, the Gel-haired Devil, in Portland. 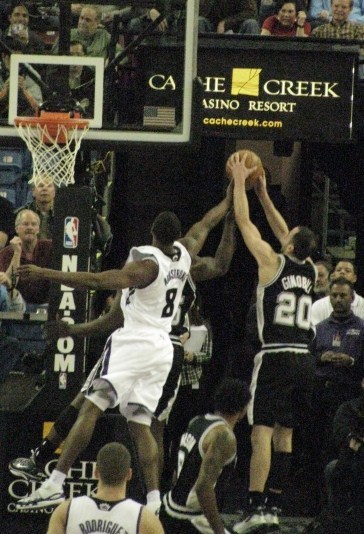 Manu grabs a rebound against the Kings. He's still wearing the protective padding for the bruise to his right shin, but he would abandon it it Portland. 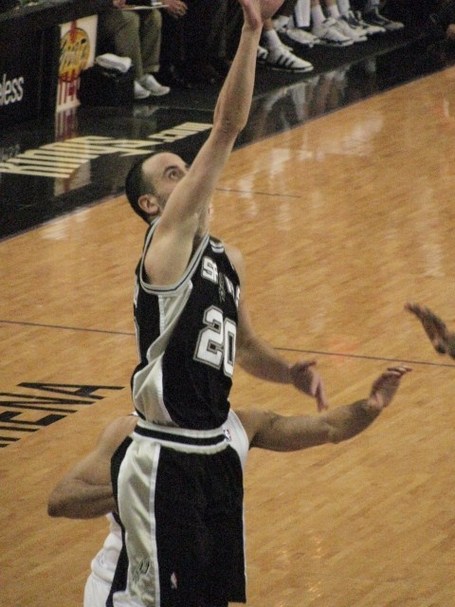 Manu drops in a little soft jumper. He was "on" tonight, probably feeling the love from the Argentines in the upper deck, who sang and chanted his name through much of the game. The arena, even though not filled to capacity, was very loud. Maybe the sound reverberated off those empty seats. 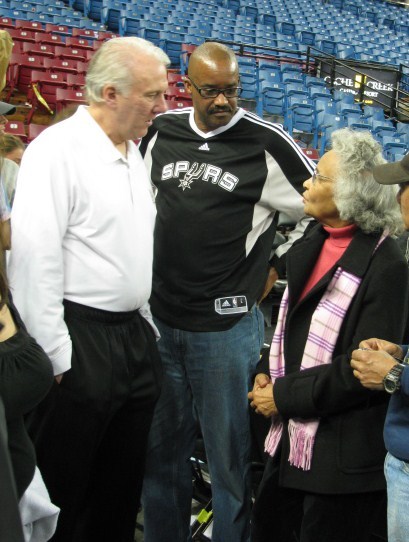 Coach Pop emerged after the game to talk with fans, here with Theo Ratliff's mother. I introduced myself and told him I had come from Texas to see the first two road trip games. He was impressed by the loyalty and thanked me for the support. 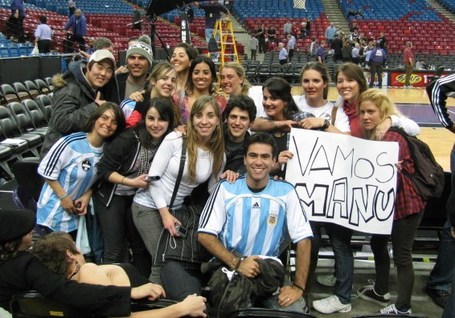 Many of Manu's Argentine fans stuck around after the game. There were perhaps 40 or so in attendance. Either through the Kings, or perhaps Manu, passes were distributed to them after the game to come down to the court to meet him. The Kings took pictures of them at center court (shrewd marketing since the Kings have an Argentine player, too). Manu spent quite a bit of time with them and posed for endless pictures. I'm told this same scene is repeated when the Spurs play in Utah.

Now, on to Portland, where there was a capacity crowd in a very loud arena. The lighting in the arena was also strange, not as bright and with an odd hue, and I never found the right camera setting. 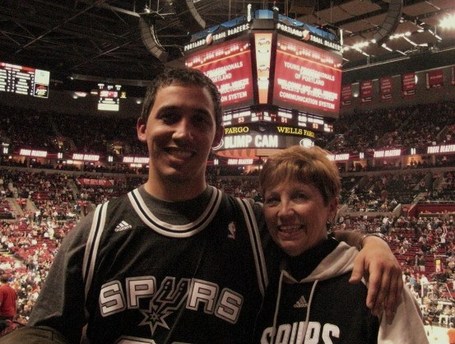 The Rose Garden Arena is also very nice, and has a large selection of locally brewed beers and ales. I met up with Latin D and enjoyed one before the game. 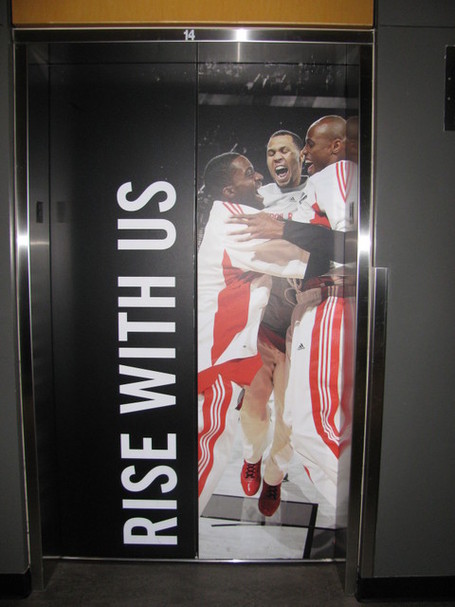 Image on the elevator door to the suites at the Rose Garden Arena. 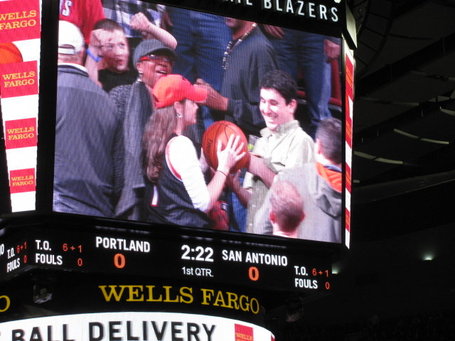 I thought this was cool - the Blazers pick a section to start the game ball on its way to the court before the game, and the fans pass it around and down through the section to the honorary ball kid at the bottom. The fans had various ways of showing their support as they passed the ball. 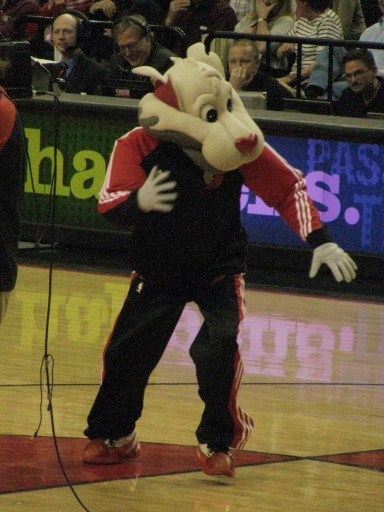 This "critter" is the Blazers' mascot. Here he demonstrates his dance moves (no need to worry, Coyote). What happens next I can't show you, but he approached a guy who appeared to be a ref. The "ref" then ripped off his shirt and went into what can only be described as a Chippendale routine (but didn't rip off his pants). It was so wrong on so many counts. 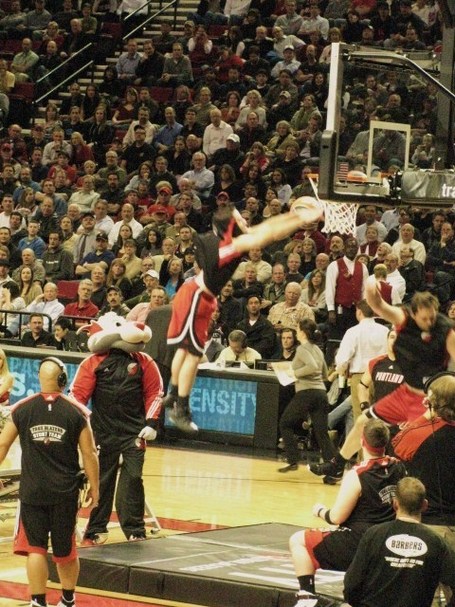 The Blazers' Acro-Dunk team was not supposed to be funny, but they were. Dudes, if your intent is to wow the crowd, be sure to make the dunks! They missed on more than half their attempts. 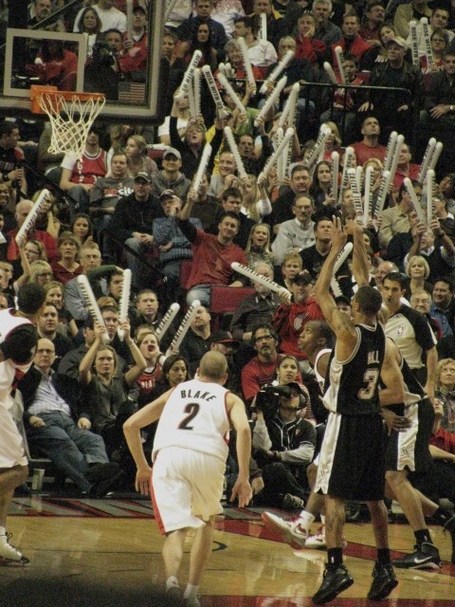 I told you the Blazers' fans were loud. This is what George had to block out of his mind while shooting a free throw. 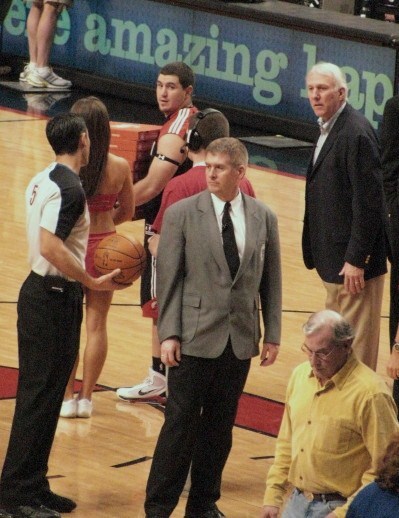 "And how's your mother, Zarba?" Just sure that's what Pop is saying to the Gel-haired Devil. His hair didn't move tonight, either. I did see him smoothing the sides during one time out. 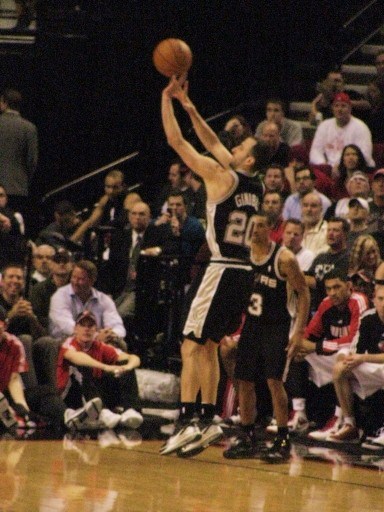 THIS wide open three connected. Too bad the one late in the game didn't.

I had another pass to wait after the game, but didn't stay long. As the ex-wife of a coach and scorekeeper for many more years than that, I know when players want to visit after a game. The only Spurs to emerge after this game were Theo and several coaches. Coach Pop came out to visit with friends and was joking with Sean Elliot about wine, particularly the sweet taste of a Shiraz that Sean likes. Pop said he might as well just pour the fruit over the top of his head.

Anyway, Latin D walked me back to my hotel, about three blocks away, in a soft rain, which for Portland is good weather. The wind and rain were both driving at the start of the game. When I got to my room, I set up my computer, uploaded my photos, and checked messages. There was one from Manu, sent about an hour after the game, thanking me for the support and hoping everything had gone well for me at the game, apologizing for not coming out to visit after the game. He said he had to do an interview (see today's SA Express) and was tired and upset by the "dumb loss." Did I mention he's my favorite Spur?

Regarding the Spurs play in both games: I never doubted we would win in Sacramento. The game never really seemed that close. The Kings are going to be very good in a year or two, if they can hold onto Evans and Casspi. In Portland, this was the kind of close game I knew it would be. Sitting in the arena, our defense did not appear to be as bad as some of you perceived it to be against a good team. We knew we would have to outscore them as much as rely on our defense.