Thoughts From The Dark Side, aka, Nuggets-Spurs Recap

Share All sharing options for: Thoughts From The Dark Side, aka, Nuggets-Spurs Recap

The Nuggets game was a pretty unsatisfying loss. If you checked out Tim Varner's recap, I think you know Pop was unsatisfied. Thoughts and things after the jump. 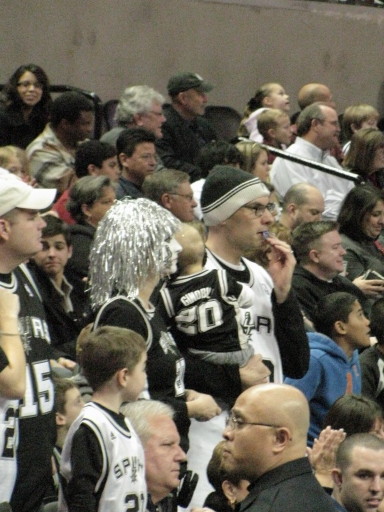 Only a Canadian would wear a sock hat in a building. It's PtR lurker Gareth, wife Alison with the silver hair and face paint, and son Griffin all rocking the Manu jerseys.

We got off to a slow start against the Nuggets, only scoring 10 points on our first 15 possessions, but I thought we were playing well for the latter half of the first quarter. The bad trend that started in the quarter and lasted throughout the game is that we missed a ton of open shots. My charting had us at 5-11 on wide open shots. Shooting only 45% when you are wide open is not good. Especially when a majority of those shots are coming from guys in spots where they are used to shooting. McDyess on the elbow, Tim at the top of the key. Roger in the corners and straight away.

The second quarter, we really locked the Nuggets down and had them at 41-33 when the wheels fell off. Way off. I have us scoring 3 times on our last 12 possessions, including 7 straight scoreless possessions to end the quarter. My notes include such descriptive comments as "shit pass by Manu", "ugly RJ turnover", "forced", "right-handed drop". I'm not sure what right-handed drop mean, but it has to be bad. We were really lucky to be down only 4. 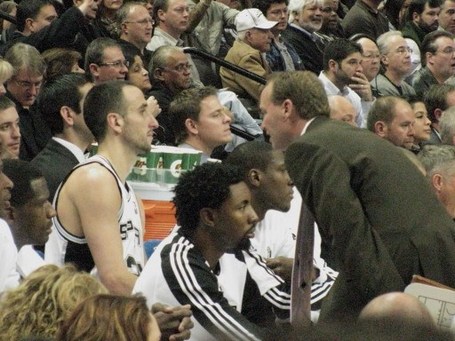 I'm not positive, but I'm betting he was a little nicer to me than to Manu.

We were KILLING offensively for the better part of the third quarter. We scored on 13 of 16 possessions with our big men, Antonio and Tim, scoring the only points outside the paint on a few mid-range jumpers. We took zero 3-point shots on those 16 possessions and we got to the line 7 times. Thanks to our defense, that offensive explosion netted us a +3 on the scoreboard. Ka-chunk, clunk, ka-chunk. The wheels fell off. 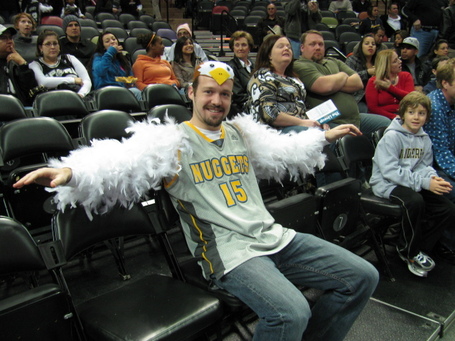 Really. What can you say?

For the last 6:30 minutes of the game, they scored all but three times. On 13 possessions. You can't catch a team when they do that to you. 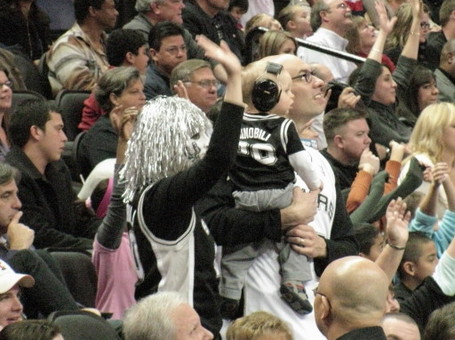 Because it was so good the first time.

I'm not really sure what to make of the game. I actually thought we played some pretty good defense and that they just made shots. We missed a lot of wide open 3's. I might be wrong about the defense. Maybe it wasn't good. But I know we can and will shoot better from 3-point land with open looks like we had against the Nuggets.

I didn't to any interviewing or question asking for this one. It was early and it was cold.

My seat is right in front of the main entrance to the AT&T Center and the wind was blowing in pretty cold. Just before tip-off, a Nuggets media guy was looking for his seat and spilled a Coke on my back. That was fun.

Quick Bits From The Hawks Game

Joe Johnson is really, really good. We played great defense in that game. The only thing that kept them semi-close was Joe Johnson's brilliance. He combined great playmaking with great shotmaking.

Of course, Mike Bibby's suckiness helped us a lot. He looked terrible.