Hey Spurs fans, the Admiral would like your help

Here's the deal. The big fella would like a little help in his endeavor and he has put together a program in which you can help him in a meaningful way and maybe get something for yourself out of it. It will cost you $3. Well, not quite. It will cost you $2.99. 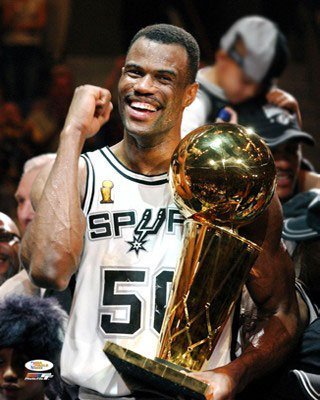 You should go to Pink Dingo (a crazy name isn't it?) and contribute $3 to the Carver Academy. For encouragement and a special message from David Robinson himself, you can watch a video by scrolling down on the page. http://tinyurl.com/yadxnak

Why contribute? I can give you a few reasons: 1.) You love the Spurs for their character. 2.) It's a good thing to do. 3.) It gives you two chances to win a pair of courtside tickets to sit with the Admiral himself.

Then, you should pass this link on to any friends you have who are Spurs fans. Yeah, this is a bit of a social media event, but I think it is well worth it. It's not a challenge to vote PtR best blog or to get PtR X number of followers on Twitter. It's a challenge with a purpose. A good purpose. The link again is: http://tinyurl.com/yadxnak

Let's show some love back to a Spur

Nothing is quite as much fun as tweaking LatinD about Spurs players playing for their national teams. It's an easy target to hit and it gets him riled every time. In the last episode of this, I told LatinD about David Robinson's Carver Academy work and that the "value he provided to the community is a lot more important to how I value him as a person than the fact that he wore a USA jersey in the 1988 Olympics." David has proven time and time again that the is a great individual off the court. I'd like to help him.

Part of why we love the Spurs is because of what kind of people they are. It has been a pretty rough year for a lot of fans, me included, as the team has performed nowhere near the expectations we had for them. Frustration has mounted and has forced us to examine why we are Spurs fans. From swgeek, "Nope, we picked a team because something about that team resonates with us. The team personality. What the players and coach represent, how they do things, how they act on and off the court."

What I believe in?

In a previous post about the Art of the Pick and Roll from a discussion with Coach Budenholzer, I stated a lot of things I didn't believe in. Chief among those, that I got a lot of comments on (both in the comments and in email) was "I didn't believe in truth and honesty". My favorite comment was from 4Him saying, "That is a terrible trait to have as a mod or for anyone else". I will tell you what I believe in. I believe that the measure of a person is what they do for others. Things small or large. It's what you can do to make the lives of the people around you better that I value. That's what I believe in.

Something else I believe in is that the age of the internet has allowed people like you and me to make a difference. It's the power of the many to act in unison with small acts of good to make something big happen. Personally, I think one of the great things happening in the US politically is that forces on both ends of the spectrum have tapped into the ability for the common person to donate $5 or $10 to a campaign and have it make their voice heard. For me, that is a great way to break up the power of the few and give it to the many.

I think this is a great opportunity for the Spurs community to step up to support a great person that we admire. We have the opportunity to help within our means, but in a meaningful way if we do it together. So go to the Pink Dingo and contribute your $3. Sure there is a bit of headache because you have to register, but it will only take a couple minutes.

The Carver Academy is a school to help kids in a very poor area of San Antonio get a good education. David described it to me as a "safe zone" within a high-crime neighborhood where kids can get something they don't get at home. Support. Kids are encouraged to do well in school. They have people that care that they get an 'A' on a paper. They get a pat on the back. I don't know about you, but I got those things from my parents. Not everybody does. Those kids are worth helping. That's something else I believe in.

For those that don't know, the Carver Academy is in a neighborhood between the Spurs old home the Alamodome and current home. It's rugged. One of the PtR family works in the area. As we drove to one of the games a few weeks ago, she pointed out the various places where people were murdered and the circumstances. She pays attention because she's always afraid it will be one of her kids involved. I think David was being polite when he called it "not a family community".

Besides feeling good about yourself, everybody who contributes will have a chance of winning courtside seats with David. Additionally, whoever gets the most people from their network of friends to contribute ALSO wins courtside seats. The link I'm giving you is for Pounding The Rock. If PtR wins, I will randomly choose a winner from this site (your chances are much better this way) for the tickets. This includes airfare and hotel.

In addition, you will get my eternal gratitude. Not sure it is worth all that much, but there it is.

In order to be eligible for the PtR giveaway (if we were to win), you have to come back to this thread and say you contributed.

So step to. Let's see what this community is really made of and if you can put $3 where your heart is.