Share All sharing options for: Spurs 95, Thunder 87: Manu is Back

The Spurs won a game against a very good team by showing a hell of a lot of resolve tonight. But, that wasn't the real story. 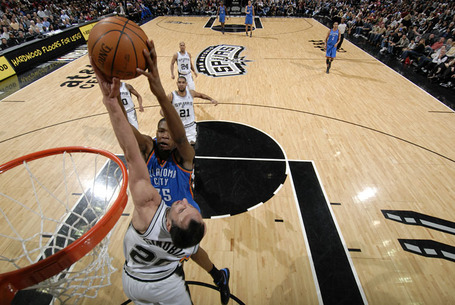 Kevin Durant's streak of games with 25 or more points came to an end tonight, as he "only" scored 21 on 7-19 shooting. Oh, but that wasn't the real story either.

What was the real story?

Manu frickin' Ginobili. The man the Spurs could always depend on in the clutch. The ruthless competitor who refuses to let his team lose. The guy who was missing for most of the season. Yeah, he's back... in a big way. He scored 10 4th quarter points, including the Spurs' last 6, made clutch rebounds, and even had a monster block when Durant tried a breakaway dunk in the 4th.

OK, I guess there's supposed to be three.

George Hill - 16 points, 5 rebounds(at least 2 of which were very clutch), 3 assists, and a steal. Cubits continues to impress in his starting role.

Manu Ginobili - 26 points, 9 rebounds, 4 assists, 2 steals, 1 block, and a gigantic dose of 4th quarter kickass. When Manu plays like this, the Spurs are a contender.