Setting A Pick Is An Art And That Makes Me Happy

Share All sharing options for: Setting A Pick Is An Art And That Makes Me Happy

Before Friday night's game against the Memphis Grizzlies, I got the great pleasure to talk pick and roll offense with Spurs Assistant Coach Mike Budenholzer. Coach Budenholzer is the Spurs lead assistant coach and has been an assistant coach with the Spurs for 14 years. He's the guy that got the privilege of coaching the team after Popovich got ejected against the Mavs. I think maybe Coach Budenholzer is the calming influence of the pair.

It wasn't an interview. It was more of a conversation. Buried in the discussion were a bunch of great nuggets. The best though was his description of the pick and roll in general. It appealed to me at every level of my being. Yeah, I know that sounds ridiculous, but it spoke to me in a way that is worth explaining.

How would you like to be Coach Budenholzer caught between these two guys? 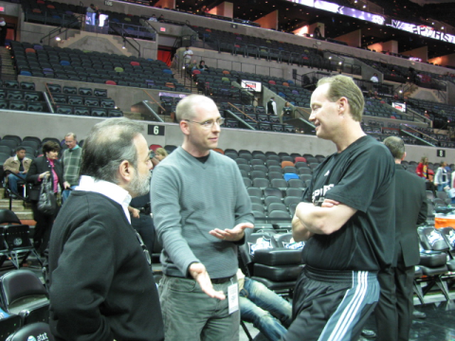 That's me talking to Coach Budenholzer. I'm the old geezer in the middle. I will say that I did get carded the night before this. And to answer a common question, yes, that is me in my avatar. Crazy, isn't it?

You can skip this personal ramble if you like and go straight to my bits of knowledge I gained. Just go down to the section labeled "Coach Bud Talks Pick and Roll"

That's how I live my life. Every event is a moment of learning. Every decision is a moment of introspection. I like to think about how what I do will be perceived by others. I like to think about the subtleties of the way an email is read. Or the way a phone call is interpreted. I recently had a fairly heated discussion, he called it beerboarding, about what honesty was and whether there really is such a thing. I argued against it. I think that everybody has their own version of the truth. I think to believe otherwise is foolish. I think that every interaction is part of a large game of manipulation. And I don't believe it is inherently bad.

It would probably come as no surprise to you that one of my old manager's called me "Mr. Philospher Guy". He thought me considering how we interacted with one of our software vendors was just bizarre. He thought we should, "Just tell them what we need and move on." I liked to consider the ramifications of our actions and how they might impact further interactions with the vendor. I think this was lost on him.

I don't think everybody should be like me. First, it makes for an argumentative friend. Second, it makes for long work meetings. Third, it makes for a mean drunk because I can spend hours interrogating you and assassinating your character with a smile on my face. What it does allow me to do is valuable, however. I can rationalize anything. I can find the good in anybody and the bad in everyone. I like both parts of them. The good and the bad. I mean, look at bellasa. She's mean as a snake and unforgivingly ornery. She's also got a heart as big as Texas and is one of the most generous people I have ever met. She's completely, unapproachably cantankerous and invitingly kind. She's done more for the readers of this site than anybody could ever imagine or will ever know. Yet, she scares me. She's a microcosm of everybody I have met through PtR. Kind and beautiful. Quirky and flawed. We are what we are. Expect it, accept it, and love it.

So yes, I look at the world through multi-faceted lenses. I believe there is a lot more to the Spurs than meets the eye. I believe that they are "Mr. Philosophy Guys". One of the things I have always admired about Gregg Popovich is that he never seemed to take the humanity out of the game. The people that play it aren't machines. The people who ref it aren't machines. The people who coach it aren't machines. Mistakes are made. You move on. You can have humor and humility in basketball. You can have anger and egos in basketball. They are all pieces of the puzzle of life. You can't remove those from the game of basketball when it is played and reffed and coached by people.

"Running the pick and roll", he said then hesitated. He moved his hands searching for a word, "is", and hesitated again. Moved his head side-to-side, "dynamic". "I was going to say an art form", I said. He responded with "yeah". He went on to explain that each player has to find their own way of running it. You can't just teach it. There are things they want guys to do, but they have to figure a lot of it out on their own. Man, what a great answer. Game. On.

That isn't how the conversation started. It started with "One of my readers made the comment that DeJuan Blair's sets really weak picks. I'd like to know about what the pick setter is doing so I can either agree or disagree with my reader with something bordering on facts. Not just me making stuff up." (Not that I'm really adverse to making things up. I do it all the time.)

Now, as you can probably imagine, he didn't know where to go from there. I mean, that is a pretty tall order. Explain the pick and roll. To somebody whose basketball knowledge is an unknown to you. In all honesty, I don't even know what came next. I probably talked to him for 5 minutes, or knowing me 10 minutes since time seems to fly when I'm this engaged in discussion, and I wasn't recording it so I'm not even going to try to repeat it. Like I said, it wasn't an interview. It was a conversation. I just had a single statement to go on and I went.

He did say that DeJuan sometimes sets poor picks (and said Kurt Thomas set great ones). As the discussion continued, I learned that what he considered a poor pick wasn't necessarily something I'd be able to recognize. The times they need DeJuan to really get in there and take a guy out are times when parts of the play BEFORE the pick are set up to make it happen. I don't think any of those times are when you just run out to set a high screen for Manu. It has a lot to do with where his defender is at the time. Sheeesh!

One point that became very clear, because he emphasized it, is that they try not to over-coach it. Even with DeJuan, he has to learn it on his own. Coach Bud said DeJuan has great instincts for the game and for the spacing and you have to let him use those to learn how to play the pick and roll. He said you also have to realize that guys don't have eyes in the back of their head. You and I can see the play unfolding behind a player, but they can't.

The other main thing I was interested in, which turned out to be a very simple answer, was what an illegal screen was for the man setting the pick. I know that if you step out and shoulder a guy they will call a foul, but what about when you roll to the basket? When is that a foul and when isn't it? Well, the answer was that a foul is when the defender gets banged into. Period. I felt very unsatisfied. I was expecting something a little more subtle and technical. However, it lead to the discussion of setting picks for Tony where you are digging in a little closer to the basket. Daring, if you will, the defender to go over the pick. Most of you know that teams try to play Tony by going under the pick.

What I found interesting because it is so obvious, is that Tony isn't expected to get a lot of assists on the pick and roll. In fact, he rarely should pass to the pick man. Why? One, because there is no room. They try to push the defense closer and closer to the basket. Which makes the floor crowded with people. Which makes a pass much harder. Two, Tony's picker needs to hold the pick longer and not roll. Unlike when Manu runs the pick and roll with his pick man just inside the 3-point line. They have a lot more space. Thus, the pick man should roll more and Manu will pass the ball to him more resulting in more assists.

To sum up, it is a really complicated play. I think I have a lot better understanding of what the Spurs try to get out of it with the different players involved in the different areas of the court, but evaluating any particular player's skills at it is going to be tough. I have my work cut out for me.

You know what? That was the second best conversation I had with an assistant coach that night. I asked another coach a question from our Laker troll Olf.