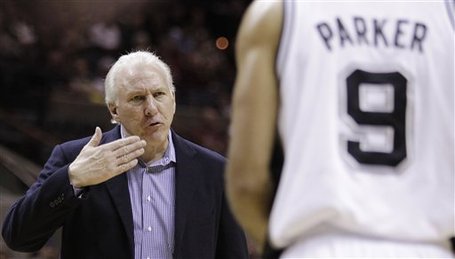 Huh, what? I still got some wine on my face? Guess I partied too hard after that last W.

Put the best start in team history in the books. After a clinical display of great ball movement and picture-perfect execution, the San Antonio Spurs once again reigned supreme over the worn out Golden State Warriors to extend its dominance over the Bay Area squad, and cement its 18-3 win-loss slate as the franchise's best opening record to a season. The Spurs put six players in double-figures and 2 others narrowly missing in on the total as the men in silver and black pieced together a thorough but still exciting team win.

Quick as a brown fox of a recap, after the jump over the lazy dog.

My apologies for the lame title. It's an experiment.

I know the schedule for the last few games has had "cupcake" written all over it so far, but who cares? These recent wins have been dee-lish, and you can see that the coaching staff has effectively used the three losses so far to polish some rough edges in the team's play. Avoid slow starts and falling behind big? Check. Up the ante on defense? Check. Both of these aspects improving, along with this season's staple of slick passing, ball-hawking defense and accurate long-distance shooting make for a very entertaining game -- not to mention a really, really dangerous team that probably no scrub squad wants to face right now (except the Wolves and Clips, maybe).

Stampler or some other Spurs fan in the Bay Area who know the Warriors more than I do can probably describe the Dubs better, but looking at its lineup, I see hope in this Golden State team. The starting lineup is quite solid if they ever get their act together and if Monta Ellis ever learns to play team ball, although looking at the bench, it starts to get a lot shady. Amundson is the prototypical NBA Energizer Bunny, while Reggie Williams is one of those amazing, left for dead, undrafted players brought to life by the genius of the Mad Scientist known as Don "Small Ball Is Sexy" Nelson. Then there's snowboarding Vlad Rad, Dan Gad-Awful-zuric, and the star of the soon-to-be-announced remake of Weird Science, Jeremy Lin. Looks like pro basketball's version of the Goonies, right there.

Still, I hope with the new ownership, this team gets to improve because there are a ton of loyal GS fans who deserve their due. Our SBN friends at Golden State of Mind also do a tremendous job with their coverage, and somehow you want to see those guys write great content for a winning team. But for now, the Spurs own the Warriors, and I hope it remains that way for a little longer.. maybe until Tiago Splitter retires. Hehe. 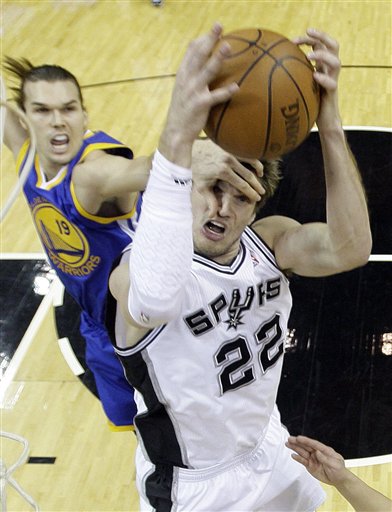 Fall A Step Behind, Move Ahead By A Mile

It's right past 12:00 midnight as I write this, and if I was too lazy, I'd say the game was practically over after that 16-0 blast in the first quarter and go to bed. But I'm feeling a little less lazy so I'll type a few more paragraphs.

After going up 9-4 in the first few minutes, David Lee and crew must've felt like Egyptian soldiers chasing after a defenseless group of Israelites, only to realize that once they thought they were on solid ground, the walls of water suddenly cave in and drown the hapless pursuers. It wasn't that brutal, actually, but the 16-0 counter run by the Spurs, led by the daredevil-ish Tony Parker and LOL-buckling efforts of DeJuan Blair, effectively established who has the FSM on their side, and set the tone for the rest of the game.

The lead also afforded Pop the luxury to sub in Tiago early, and along with George Hill, they kept up the pressure as the team didn't miss a beat. Albatross, in particular, continued his strong run, and by the end of the day recorded his 8th straight double-figure game to somehow make us forget a little bit how awesome Manu was when he used to lead the B.A.M.

In typical Spurs fashion, a few hiccups here and there (to the tune of settled long jumpers and sloppy rotations) allowed the Dubs to pull within three points. But again, nobody's really crossing the parted Silver and Black Sea and getting away with it. A Blair putback, TP drive, Manu two-for-one situation layup, and a drive and dish play from Tony to Manu for the corner three restored order, and just like that, the good guys headed to the locker room at halftime feeling good about themselves.

Also, when Ime Udoka is driving with ease inside the paint and dishing to open shooters, it reaaaally says something about your defense. Just sayin'. 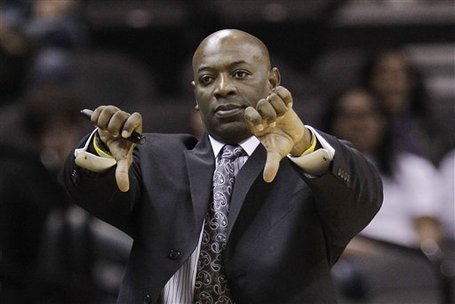 Because we didn't have to worry about a comeback happening or any real threat occurring at all, it was really nice to see how immaculate the Spurs' ball movement was during the game. This is one of the many things I like about this year's team -- everyone knows anyone can make a shot, given that that person is open, in his comfort zone and in rhythm, so you can see that there's no hesitation at all in swinging the ball to the open man.

While Tony had one more assist, it's clear that Gino's the one enjoying his options the most, turning the second half into his personal diner, him being the waiter and serving people up with nice dish after nice dish. He had that surprising behind the back flip to Tony Parker standing on a corner, who dribbled once, lifted for a jumper then swish. Immediately after that, in the same spot, Manu finds RJ for the open corner three. The Sickness also had fun working the pick-and-roll with Banana, who also played a good game by slipping through the cracks of the defense to open himself up for passes inside the paint.

And of course, there was DeJuan Blair who just owned David Lee and Andris Biedrins on this one. Lee might've gotten more offensive boards on the stat sheet, but clearly he had his hands full with DeBeast, who I'm still not writing off despite a very slow and difficult start. I think Tim Varner from 48MoH pointed out that Blair doesn't fit the Spurs' fast-paced scheme, but I tend to disagree. We played fast in this one and DeJuan seemed fine, so most likely the issue now is just match ups, with probably 70 percent of centers and power forwards making a mismatch out of our beloved Grizzly Blair. Still, watching DJB wreak havoc and show off his dipsy-doo stretch layups are fun, and when you see Blair having fun, too, it just gives every Spurs fan a warm Christmas-y feeling inside.

At the mid-point of the fourth quarter, Matt Bonner finally decides to attempt a shot, which is a three-pointer (do'h) that hits nothing but net, and then Hill adds on two more of his 3-3 3FGs for the night to finish off the tired Warriors for good. It must really hurt to get buried under a barrage of three-pointers, eh?

Finally, Jeremy Lin goes in and we know it's over, just like Tony and Eva (Hey-o! Sorry, I couldn't help it). Oh, of course, we get to see some more of Tiago which is always a good thing, right? Riiiiight.

Sean Elliot also mentioned something like the team is currently 15-0 this season when they get to 100 points? Somebody... don't wake me up if I'm indeed dreaming. Stay away from me.

Lastly, the 31 to 43 assist to FG made ratio (or a whopping 72 percent) is pretty amazing. The team is averaging a 70 percent assist-to-FG made ratio in this current mini-stretch of three wins. That being said, Tony, please continue to pass the ball to Manu.

Anyway, Spurs win, and that's all that matters.

3 -- George Hill - Despite shooting 7-16, he took it to the Dubs and also helped Parker contain the ever-dangerous Monta Ellis. 17 points and 3-4 accuracy from deep get him the third star.

1 -- Tony Parker - Set the tone for the attacking game the Spurs played on the hapless Warriors. 19 points on 9-14 FG% and 9 assists

Up Next: The Atlanta Hawks are coming to the AT&T, and somehow, I'm not so scared of these Easterners. They still play a lot of one-on-one iso ball, which plays right into the Spurs' hands. Also, I think Joe Johnson is still injured so hopefully there will be no let up from the hosts.