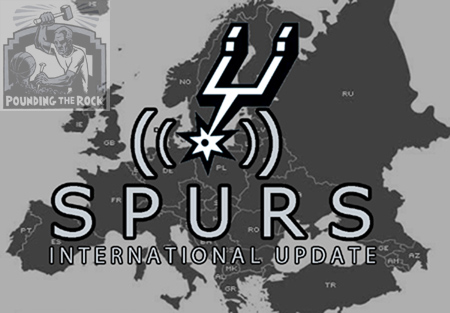 After a bit of a hiatus, it's finally time to check out what's going with Spurs prospects and castoffs across the pond. I would have loved to get this posted sooner, but the Spurs' great start to the season sort of pushed this to the back burner. Plus, it took a while for me to find all these guys and/or for them to find homes for the season.

Anyhow, the Euroleague season is well underway (it's been going for over a month now), and it's time to check in with our guys.

Let's start with the teams that have multiple names that are familiar to Spurs fans, all of whom play in Euroleage competition. We're just going to jump right in. NOTE: All stats below are from Eurobasket.com unless otherwise noted.

Partizan has the potential to be one of the best teams in Europe, and they have 2 of the Spurs 2010 training camp castaways. James Gist was signed within a few days of being cut by the Spurs, while Curtis Jerrells looked for work elsewhere in the NBA after being cut by the Hornets. As previously mentioned in a fanshot, Jan Vesely is also likely to be in the NBA at some point in the future, since he is a rare 6'11" small forward.

Not much new with James. He's a great rebounder, decent scorer, and can even step back to hit the three (though not too consistently). He's got to bring the turnovers under control though. 3+ TO's a game for a big man is just not acceptable.

There's really not much information you can garner from a two-game sample size, as the numbers above prove. But, Curtis just signed with Partizan about 10 days ago, so we'll have a better idea of his capabilities against high-level competition once he has some more experience under his belt. [Party's on? Partizan! -jrw]

Valencia is home to one of the Spurs' most interesting draft picks of the last few years, Nando De Colo. Joining SpurNando this year is Robertas Javtokas, who is perhaps the least likely of any player we're tracking to ever take the floor for an NBA squad. We're obviously going to talk about Nando more over the course of the season, but it's also nice to see Javtokas doing well after recovering from that horrific motorcycle accident a few years back. As a team, Valencia won the EuroCup last year, earning a spot with the top dogs in the Euroleague. They're having trouble with the higher level of competition, though.

Nando's stats are not very dissimilar to Manu's when he played in Europe, with the notable exception of 3-point shooting (and total scoring). However, he seems to have lost his starting job to Omar-Sharif Cook, but that might just be due to an injury that kept him out of some earlier games. Another interesting tidbit is that Nando is now listed at 6'8" - if true, he's grown a bit since we drafted him, and that might help his cause. But there's not a whole lot that makes him look like NBA material.

Javtokas is playing very well with his new squad, and they could be dangerous if SpurNando ever gets it together. [But what about that assists to turnover ratio, huh? Robby, that's not the one that's supposed to be doubling the other. -jrw]

Although they had a couple of NBAers on their roster last year, the deep-pocketed Greek team has had to re-tool after losing Josh Childress and Linas Kleiza, who fled back to the NBA during the offseason. They stole Vasillis Spanoulis (who was a Spur for approximately 5 seconds) away from arch-rival Panathinaikos, and convinced Rasho Nesterovic to cross the pond and play for them. They also still have another player of interest to the Spurs in Ioannis Bourousis, who has said that he wants to play in the NBA next season.

Rasho is a beast for this traditional Euroleague powerhouse team. Just look at those shooting percentages. He's actually shooting better from the field than he is from the free throw line, which is insane. I kinda wish the Spurs still had him sometimes.

Brontosaurus is a beastly rebounder, despite spending a lot of his time on the perimeter while Rasho works down low. He can even shoot the 3, but is pretty inconsistent at that. He still looks like a rather versatile young big who might be a worthwhile addition to next year's Spurs team.

Kill Bill (V-Span's nickname) is an amazing assist man. Just FYI, the Euroleague is very strict about awarding assists, and as a general rule, the assist numbers for Euroleague teams would be nearly double in the NBA. Yes, that's how good V-Span is at helping his teammates. [Oops; maybe now I owe Javtokas an apology? - jrw]

So, if you're as crazy emotionally invested in the Spurs as I am, you may recall the name Romain Sato. Back in 2004, the Spurs drafted Sato out of Xavier, and he even came to training camp, but was waived by the team before the season began. There were rumors that he was upset about playing time, hich is a big no-no with the Spurs. Anyhow, he eventually found his niche, becoming the MVP of the Italian League last year when he was with Siena (beating out league-leading scorer Gary Neal, whom you may have heard of). Olympiakos and Panathinaikos also have one of the most intense hoops rivalries in the world, so it should be fun when they finally play each other.

Sato's 3-ball is a little off this year, but I'd expect him to remedy that at some point. He was killing it from deep when he was with Siena. Other than that, he's doing pretty well. He's also developed a reputation as one of the best perimeter defenders in Europe. At age 29, Sato will probably never sniff an NBA court again, but it's nice to see him doing well.

Speaking of Sato's former team, the brass at Siena decided that another former Spur would be the best choice to replace Sato when he bolted for Greece. Despite some hiccups with regards to a back injury that voided his first contract with them, Malik Hairston was signed a second time to play for the club this upcoming season. Even though they're not yet at full strength, Siena looks like a Euroleague superpower, with the highest scoring margin of any team so far. When Malik gets back, things could get epic for them, as they've never won a Euroleague title, despite 3 trips to the final four.

Malik hasn't played yet, but once he's fully rehabbed, he'll likely make the strongest defensive team in the Euroleague even stronger. We're rooting for you, Malik. Show David Moss just who deserves to start.

That's it for the Euroleague Teams, now let's move further down the competitive ladder to Europe's other major hoops leagues.

A couple of Spurs' training camp cast-offs have found their home with this Israeli team: Jack McClinton (2009) and Tyler Wilkerson (2010). I like both of them, but they each seemed a little cocky during their time with the Spurs. They're playing in the second-tier European league, the EuroCup, but they're not doing so well.

Jack ain't exactly lighting the Superleague on fire, but his scoring and long-range shooting in the EuroCup is pretty impressive. He still doesn't look like a Spur by any stretch of the imagination, though. [Except he already has a PtR nickname: JackAttack! - jrw]

Wilkerson seems to be having a pretty good season. If he can bring his rebounding/blocks numbers up, he might get invited back to Spurs camp at some point.

Before I get started on why we're paying attention to Bolgna this season, I should mention that they used to be called Kinder Bologna, back when a certain Argentine led them to two Italian League championships and a Euroleague championship. After that, the team went into a steep decline and ended up relegated to Italy's second-tier league, before finally getting back far enough to compete in Serie. A and EuroChallenge (tier below EuroCup). Even at that, they're no longer in the EuroChallenge, despite taking the title of that league in 2009.

This year, we're trying to follow them because of a 2004 Spurs draft choice, Viktor Sanikidze. Even though he was drafted so long ago, Sanikidze doesn't even turn 25 until April, so he may have a decent chance to be a Spur one day. As a 6'8" combo forward, he could be valuable someday. However, he's not getting a lot of playing time, and that's troublesome considering that his team isn't even in any international leagues.

Update on Viktor - big thanks to Alamo in the comments for finding this:

The long Georgian was injured in Caserta, and the diagnosis was not the sweetest, having the player suffered a double injury to the ligaments of the right ankle with a prognosis of at least 30 days.

So, that's your international update for December. It was fun tracking all of these guys down, if a bit arduous. But let me know what you think, and if you have suggestions for any other players that you'd like me to research and report on in January, let me know in the comments.