A little tardy with the photos today - been keeping score at a high school basketball tournament today. A few words about the atmosphere in the AT&T Center last night first. As is usually the case when we play the Lakers, there were many purple and gold jerseys in the arena. My section on the baseline seemed to average at least one Lakers' fan per row. Apparently many Spurs season ticket holders who were out of town for the holidays decided to sell their tickets online. As the LA fans around us began to display their bravado before the game, my seat mate said, "Well, at least we know they had to pay a lot for their seats." Taking pictures was a challenge as the retractable seating in my area was really rockin'! The Spurs fans were involved in the game from the start, and the noise level was worthy of a playoff game. Way to go, fans!

Perhaps the most noise came when George refused to back down to Kobe. What many people missed was what Tim did in the incident: he got between Hill and Bryant, facing Kobe, and proceeded to move slowly toward Kobe, moving him back away from George, until the refs restored order. 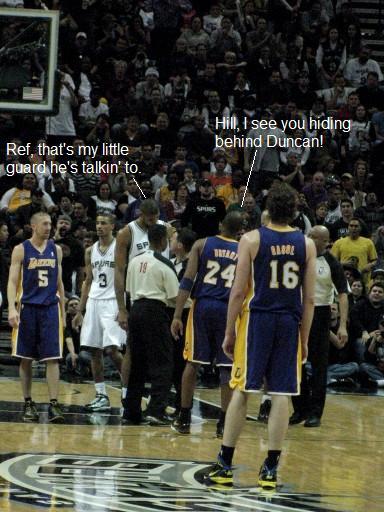 DeJuan earned a whole pair of Spurs in the game - here's one of his 15 rebounds. And thank goodness Manu showed some reserve by not going after it, too, lest he be minus an arm. 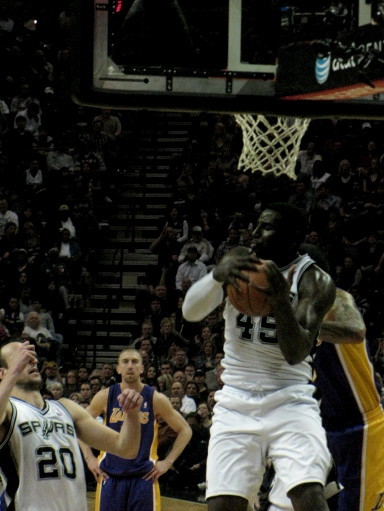 Manu had two steals from Kobe in the first half of the first quarter. This photo is from near the end of the second quarter. Kobe would try to get up a shot soon after, and Manu would block it. 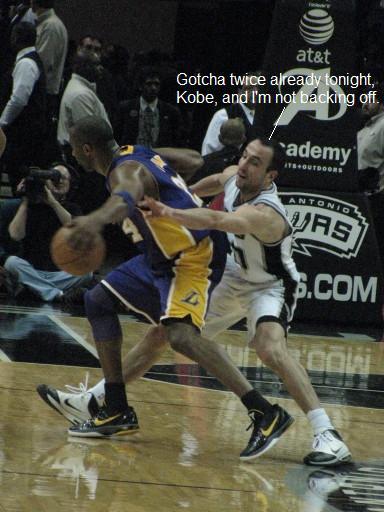 After hitting his first four shots in the game, Bryant began a streak of 13 in a row that would not find the basket. Bonner played him close near the end of the second quarter. The Spurs did a great job of defending him without fouling - he only had one trip to the line. 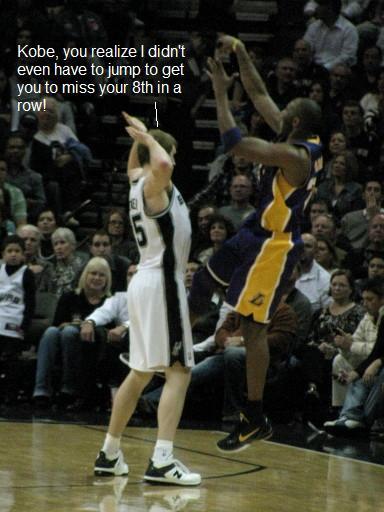 Manu got in the way on this one a few seconds later. 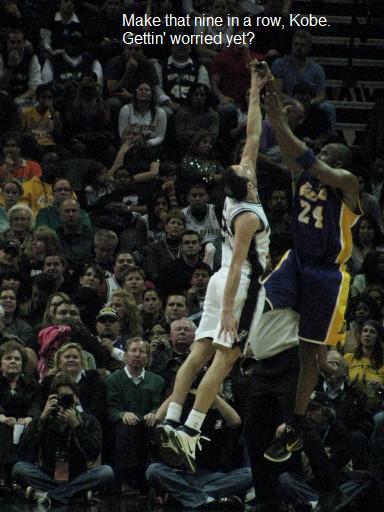 Manu struggled mightily on offense. When he came out of the game at a time out in the first half, he did what I've seen him do so often when things aren't going well - took a seat at the end of the bench, slapped a towel around, muttered to himself, and then sat with his head down, staring at the floor, taking his mind to wherever struggling superheroes go to try to regroup. 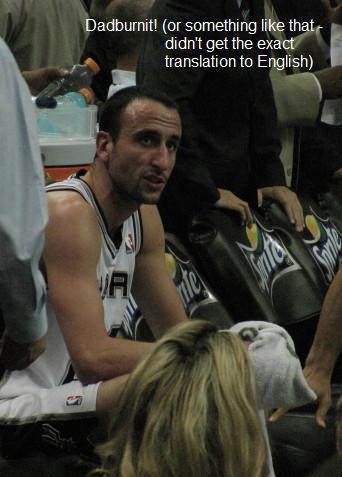 Derek Fisher picked up a technical in a struggle over a rebound with RJ. The fans liked this, too! 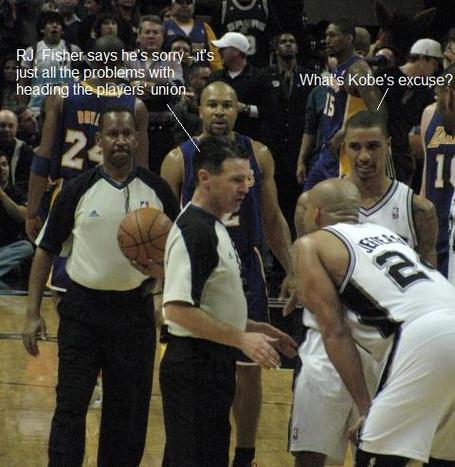 Late in the third quarter, Matt Barnes lofted a three over Manu, and you could see the determination on Manu's face to get it back. Nine seconds later, on the next possession, Manu lofted one over Barnes, breaking his scoring drought. 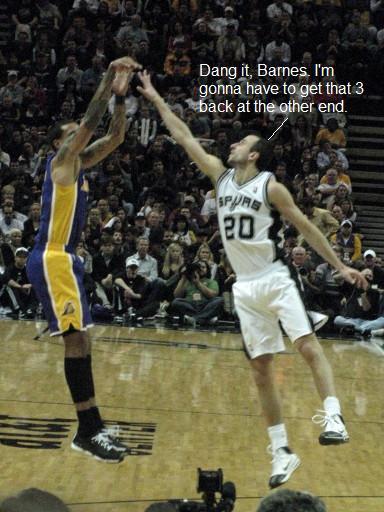 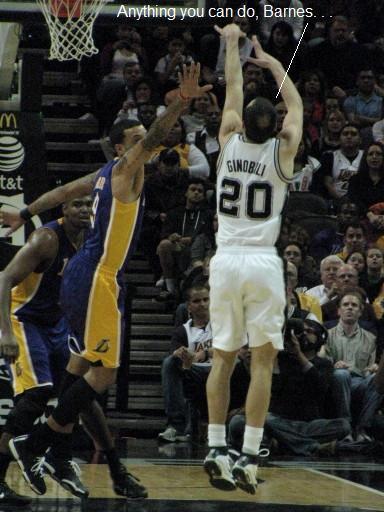 I love this photo of DeJuan and Tim - mentor and protegee 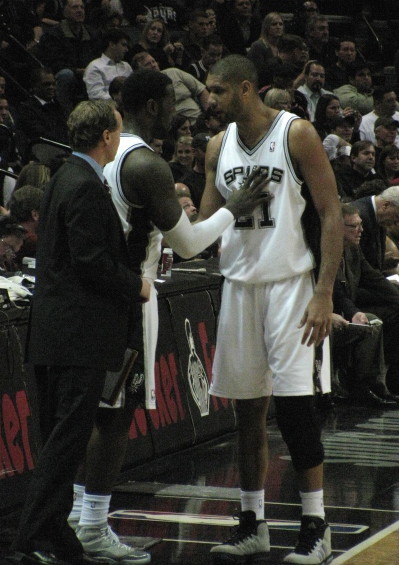 Gasol only took two shots the second half, and missed them both - this was his closest position on the court on either of them - no shots under the basket in that half. 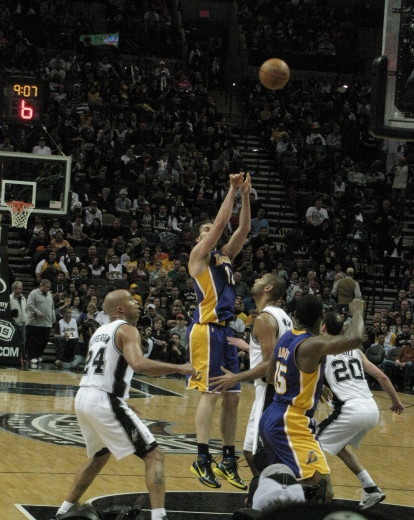 Andrew Bynum missed 6 of 8 free throws in the game. 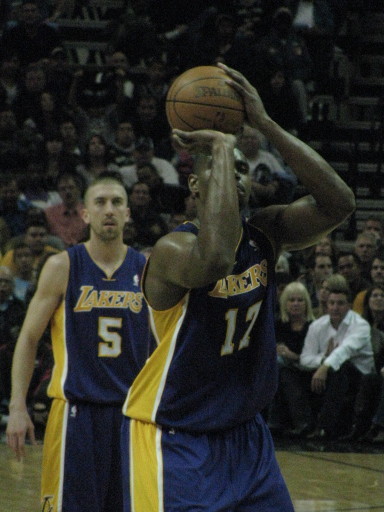 Tony was Mr. Amazing on this night. This shot went in! 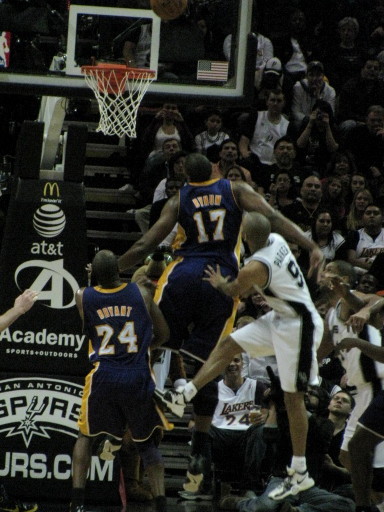 And the nail in the coffin - Tony stole the ball from Steve Blake and converted it at the other end to give the Spurs their biggest lead at 19. Garbage time began after this one with 2:18 remaining. 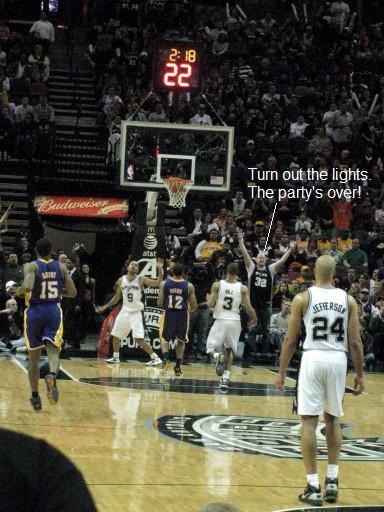