Share All sharing options for: Game #30 Preview: Wizards @ Spurs - Recovering from the loss

So the Spurs are coming off their worst performance of the year. An embarrassing loss to the Magic on Thursday will hopefully motivate the Spurs to come out and lay a whoopin' on the Wizards. The Spurs will look to improve the defense, which was nowhere to be found against Orlando, against the hapless Wiz. Washington has traded away notorious head case Agent 0 (aka Gilbert Arenas) and has a new look team headed by our old hated foe, Mr. Howard. The Wiz have yet to record a road victory. 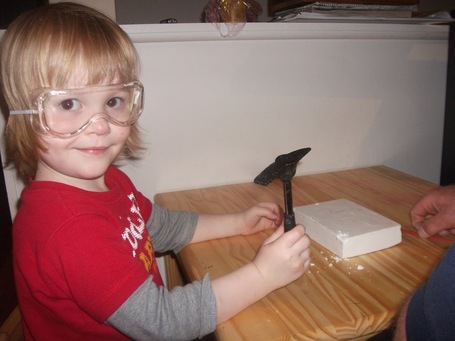 It's time to take that hammer and pound out another winning streak.

Hack preview after the jump:

Just got an update from Tim. The Wizards front court starting is suspended. Bullets Forever has the story. This should make this tough game for the Wiz even harder. Spurs should roll here today.

This makes me laugh.

Sorry for the super hack preview. I'm working on an hour of sleep over the last 48. Here we go:

PG: Wall is a nice scoring PG, but he's about to meet the best scoring PG in the game. Oh yeah, and Frenchie McWonderbutt is passing too. Tony might have his hands full on defense, but he should get his.

SG: I like Henrich, I think he'd be a nice fit on the Spurs outside of how much he costs. That said, Manu Claus is off from Christmas and should be ready to dominate here. Manu should have his way with Henrich and Nick Young.

SF: This is a tough match up for Rage. Lewis is big and can spread the floor. I imagine that RJ will have a tough time stopping Lewis, but Lewis does have his moments of checking out of games.

PF: I'm giving this to Blair even though I know nothing of how good Blatche is or isn't. Blair has been playing much better of late and I'd love to see this continue.

C: Duncan didn't play too well against the Magic. I'd look for him to come out nice and rested and have a solid game.

Splitter, Neal, Bonner and McDyess against Josh Howard and friends. I'm going to have to go with the Spurs bench here. I'd love to see a lot more of Splitter over the next month.

CIA Pop is full of turkey. That can't bode well for anybody.

Really good team at home against what is a team without a road win.

Spurs are coming off of a bad loss and playing a bad team. Oh yeah, and they'll be rested.

Key 1 - Defense - It's time for the Spurs to show a little defense against a bad team.

UPDATE: McGee and Blatche are suspended from today's game.

UPDATE #2: It's being reported that Hill is going to be back tonight.