The Day the NBA Stood Still

Share All sharing options for: The Day the NBA Stood Still

Have you heard that there's a big game in the NBA tonight? No? Is it cold in your cave? I have heard everywhere from the major sports networks, to the major news networks, to the local news networks, to the Pawnee smoke signals on the horizon that apparently tonight's game is a big deal. And you know what? As a fan of the Association's best team right now, I could not possibly care less. I'll likely watch, sure, but only the first several minutes so that I can say I took it in when the fight that even Artest would be jealous of happens. I'll briefly watch, so long as there's not a good rerun of King of Queens on, or it doesn't conflict with turtle-feeding time, or I'm not finishing a load of whites. But with every second I watch, I'll become more and more bitter. More and more full of rage that to simply check last night's boxscore of the league's best team and brightest story, I had to click through 5 separate screens just to locate anything. 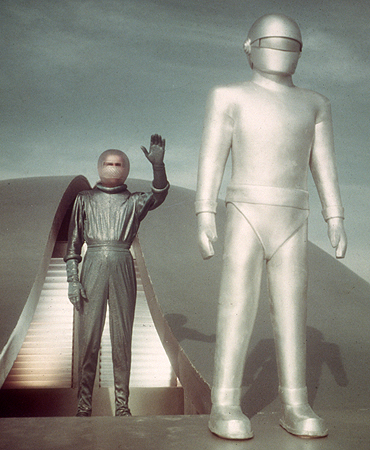 In the background again, happy to see you.
via www.scificool.com

The Biggest NBA Game EVER! Srsly?

Before most of us were born, the San Antonio Spurs were written off for this season. The already old and fossilized Tim Duncan is even older. Manu Ginobili and Tony Parker are older and still just as foreign. The other guys are still the other guys, and nobody is a Laker or Celtic. It's the age-old frustration of being a small market team, relived again and again. Each of us, for yet another year, deals daily with the collective sigh of frustration as the Spurs demand attention, yet receive none.

But you know what? There's no cause for resentment over the misdistribution of attention. Going into last night, the San Antonio Spurs were the only undefeated team in the league on the road and had the best overall record. And we don't demand attention. We don't pander and puff around, throwing powder in the air and posturing for the flashbulbs. We don't call press conferences to announce that we're calling press conferences. We don't require mass marketing and commercials and league endorsement for our validity. We don't even WANT attention; in fact, that very independence alone is what makes many fans of our organization. The San Antonio Spurs organization quietly, wisely and humbly just wins, as we're doing yet again this season. We long ago recognized that acclaim means nothing if it results in empty rafters. Living in Colorado now, I've got a front row seat to witness a local team that is in the infant stages of this learning process.

Our stars don't depend on the seductive approval of the masses, nor do they rely on the media's constant adoration or focus. The core of our team, out of a commitment to loyalty, character, and community, agree to take less money for shorter terms than the other team's stars. They go so far as to avoid the spotlight and welcome the anonymity that comes from being a San Antonio Spur. When I was young, my parents taught me to be more impressed by David Robinson's balance - his SAT scores and his all-around game. His complete lack of guttural yelling after alley-oops. Not his biceps, thunderous dunks and 71-point games. It resulted in the championships being far more special and rewarding when they did finally come. And it resulted in the formulation of a culture in San Antonio that, although not celebrated nationally, is one proven both in victories and ultimate success.

Today, more than any other day this season, I'm enormously proud to be a San Antonio Spurs fan. I'm proud that Tim Duncan cares more today about advancing to the next level on Black Ops than he does about the media festival surrounding tonight. I'm proud that Manu's biggest joy today is his young family, and not that he's again arguably the best SG in the game. I'm proud that we have communally agreed to trade magazine covers for banners. 15-3 is exciting and redeeming, but the under the radar culture that the Spurs organization has cultivated over the last 2 decades is what impacts me. And seeing the spectacle that is tonight's game makes that realization all the more poignant.