In front of a home crowd with reasonably low expectations, the Clippers defied standings, history, and the best laid plans for a 80-2 season with a gutsy victory over our heroes the San Antonio Spurs. Blake Griffin and his rookie pals built an improbable lead over the NBA-best Spurs, and the long lost Baron Davis contributed just enough to protect it while the Spurs fought and clawed to no avail. If you're a glutton for punishment and savor that bad taste in your mouth right now, jump below and read on, friend.

Just one night after a thorough, all-cylinders win over the Warriors, the Spurs weren't able to summon any of the dominating offense or clutch defense that's becoming our trademark. The closest we came to the comeback victories of late was a third quarter push that cut the Clips' lead to five. Our effort to steal the game died however when our offense could only produce 6-21 shooting and 2 FTs in the final period.

The Clippers ended our perfect road record, perfect record against crap teams, and a head-to-head streak that was at 942 games. All it took for them to shed that King-Kong sized monkey on their collective backs was an amazing show by the game's best rookie and a complete meltdown of everything SA's come to rely on to win games. This is more than just a case of the Back to Backs, this was a Complete System Failure. 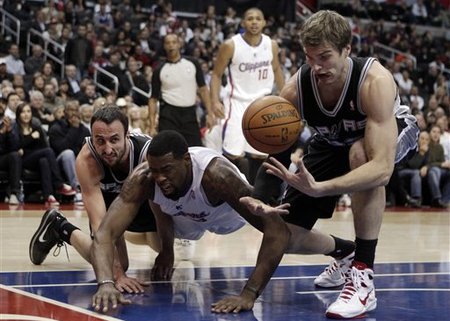 Even in a season so young that casual fans assume it hasn't begun, the Spurs have somehow managed to play the Clippers four times (counting preseason). It was clear when the Clippers played 'at home' in Austin Texas, and it's clear now - Blake Griffin is the next unstoppable big man in the association. Fans will inevitably draw comparisons between tonight and our struggles against a young Minnesota front-line of Kevin Love and Darko Milicic, but Griffin is more like Shawn Kemp or a thirteen year old Charles Barkley than either of those young pups. I'll give you a quick scouting breakdown of this Rookie of the Year lock, based on tonight's game:

If Blake Griffin catches the ball on the move, or anywhere close to the basket, he scores on you.

If Blake Griffin catches the ball and posts up or faces his man, he'll throw up a bad shot or turn it over.

Even though most of his damage was done before the fourth, The Griffin was showcasing both his lion and eagle DNA tonight. On transition plays, cuts, and successful roll plays, the Clippers used him to devastating effect. In the halfcourt the most pain he caused us was with well-timed passes to counter the double-team and set his team up for three pointers. With a set defense we could get stops, but so much attention went into Griffin there was no-one available to rebound the miss or defend the other four Clippers. A flawed masterpiece for the rookie, but in a game where no Spur had an answer it was enough. 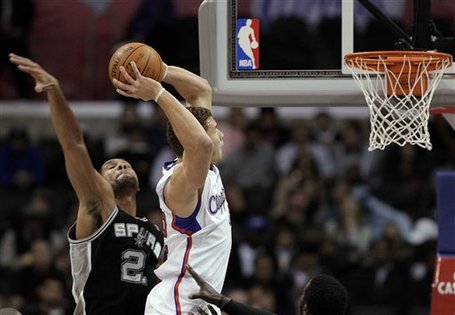 Can we just say, 'back to back' and wash our hands of this mess? I don't think that's the real cause here, except perhaps in the case of our venerable forwards Tim Duncan and Antonio McDyess. Our big bigs were a combined 4-14 and had a noticeable athleticism deficit against the Clippers this night. Blair got benched with finality in the third quarter, and a distracted Tony Parker joined him after two turnovers in two minutes and finished with 18 minutes total. An off night for the big three (Manu was just five of fifteen) is a good place to start looking if you want to know how the Spurs ended up shooting just 35.6%.

You don't reach a low like that without combining poor performance with bad luck. The bread and butter of our hot start is how great we've been at hitting threes and getting points at the free throw line. These tactics involve forces beyond our control: luck and referees. We got great looks for our best shooters tonight, but neither Matt nor Manu could convert the trey. Meanwhile, a lot of the misses and unproductive plays by George Hill and Ginobili were during attempts to draw a foul that went uncalled.

Our best chance for a comeback was in the fourth, when we weren't dealing with Griffin's insanely productive offense (first and third quarters) or the three point barrage that occurs when you double him (second quarter). Tough play from Richard Jefferson and George Hill almost got us back in it, but the lead was just out of reach. The Spurs will regret not grabbing this game as a win, but it's not like our failure was a lack of effort or team focus. We were just <wince> outplayed by the Los Angeles Clippers; some nights the worst team can be the better team.

George Hill - Seven of Sixteen Shooting is good for 44%, when the team was just 35%. Hill played great defense tonight and was a big part of the second and third quarter runs. This is surely reflected in his plus/minus where he finished +9 on the night. Good play from George is encouraging, but let's hope it doesn't take benching Tony to get more of it.

Richard Jefferson - RJ is the only Spur who had a good night by the usual standards. He was 5-11 for 13 points, had 9 boards, and drew a ton of fouls during the second period that we were unable to capitalize on. Furthermore when Udoka was in (let's call him RJ 0.5) there was a noticeable drop-off in just about everything. Perhaps RJ has me a bit spoiled.

Gary Neal - He's no Blake Griffin, but our own rookie phenomenon demonstrated why the Spurs staff was so high on him draft day. Oh wait, that's right, we got Neal for free, without a draft pick or national consensus that he's good. Well, he's very very good, and his zone busting threes are genuinely exciting in a way that just seems wrong for a San Antonio Spur.

Next Game: Friday, December 3rd, at Home against the Timber-Wolves