That's right kids, its back! It's been almost a year since our last TWSS Basketball post. Below you'll find news, articles and blog posts about your San Antonio Spurs, their games, opponents and a little extra fun.

Let's get this party started.

Spurs look to stay atop or near the top in this weeks Power Rankings:

Power Rankings: New No. 1 by a nose as faves pull away - NBA - CBSSports.co

m Basketball
This season?s horse race is made up of six different breeds, with the usual suspects mostly finding their usual spots. But the Spurs are jockeying for position as the odds-on favorite.

TSN.com - Power Rankings. - The most comprehensive site on the internet for Sports from a Canadian perspective.

NBA Power Rankings Week 7: Have the Miami Heat Surpassed the L.A. Lakers? | Bleacher Report
It has been an interesting week in the NBA to say the least. After being bought by the NBA, speculation has been growing that the Hornets could be playing elsewhere next year despite the NBA's insistence otherwise...

NBA Power Rankings: There are some long winning streaks out there | ProBasketballTalk
Our weekly NBA Power Rankings, where if it were a seven-game series we'd take any of the next three teams below Dallas to come out on top, but when you win 12 in a row you get to keep the top spot. 1. Mavericks (19-4). They’ve won an even dozen in a row now.

NBA Power Rankings at the End of the First Quarter - Associated Content from Yahoo! - associatedcontent.com
The San Antonio Spurs sit atop the NBA Power Rankings with one quarter of the NBA season complete. Ironically, the Spurs started the month of December with a loss to the team that sits at the bottom of the rankings. 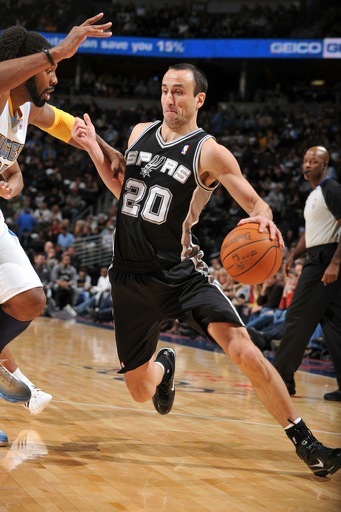 The King of Clutch.

Game # 25 Recap: Spurs 113, Nuggets 112; Manu Saves The Day Again - Pounding The RockHow did Manu bail the Spurs out yet again? Find out.

Stats of the Game: Spurs vs. Nuggets | December - Project Spurs gives you the Stat of the Game.

Denver Nuggets vs. San Antonio Spurs postgame 3-pointers | All Things Nuggets
After each Nuggets game, Benjamin Hochman (new to Facebook!) will breakdown three hot topics of the night * We saw three things tonight that we might never

Nuggets vs. Spurs recap: Lets call this one a victory... - Denver Stiffs
Nothing else to say but the Nuggets were robbed tonight. Spurs style. The Argentinean Flopper Manu Ginobili added yet another chapter in his long history of Nuggets hate. The score says Spurs 113-112 over the Nuggets...but we know differently don't we?

Golden Nuggets: Reacting to "the charge"... - Denver Stiffs
It's Friday and the good news is Carmelo Anthony hasn't been traded yet. The bad news is that my wish for the Nuggets to be 20-10 after 30 games (and thus be buyers and not sellers at the trade deadline) is hanging on by a thread...

Game #24 Recap: Why Won't You Let Me Be Sad, Spurs? - Pounding The Rock
Manu makes your dreams come true.

Spurs Nip Bucks; Bucks Butcher End Of Game | We're Bucked | A Milwaukee Bucks Blog
The Milwaukee Bucks displayed great effort and heart by again coming back from a double digit lead to make it a game. On Monday they were able to overcome a

Stats of the Game: Spurs vs. Bucks | December - Stat of the Game from Project Spurs

Something funny for you:

Other Spurs News and Articles:

Yes, SiMA, There Is a Manu Claus! - Pounding The Rock
This is a MUST READ. An homage to the incomparable Manu Ginobili ... and 113 year old editorials.

Comparing the First 22 Games - Pounding The Rock
Josh breaks down the first 22 games.

SPURS: Sweet Therapy For Stan Albeck
Once a Spurs coach in the George Gervin era (1980-83), now a rabid fan, Stan Albeck pulls for the Silver and Black as hard as anyone. He rarely misses a home game.

1-on-1 with the previous no. 21
A forgotten year in San Antonio Spurs history, the 1996-1997 season in many ways set the foundation for the culture of the Spurs. Before the multiple foreign All-Star imports stolen with late draft picks, or mining Europe for role players, or even before Tim Duncan--back when an inexperienced front office Gregg Popovich was acquiring the Vernon Maxwells, Charles Smiths, and Carl Herreras of the world--there was a MASH unit of players led by a future hall of famer wearing a familiar no. 21 jersey.

Tim Duncan, grumpier with age
The wave of milestones keep rolling in, and so far as Tim Duncan is concerned, he’d rather they not be. In the San Antonio Spurs 95-78 victory over the Portland Trailblazers the Spurs longtime franchise player played his 1,000th game and took sole possession of 29th place on the NBA all-time scoring list, surpassing Walt Bellamy. If Duncan had his way, he’d rather not have just accomplished either, let alone be reminded.

This is just cool:

Top 5 NBA Clutch Players - ESPN Video - ESPN ESPN Video: Jalen Rose and Skip Bayless discuss their top 5 current NBA clutch players - This is stupid and probably will just make you mad, but there it is.

Tim Duncan Not an All-Star This Year? Don't Count Him Out -- NBA FanHouse - An All-Star? I think so.

NBA Trades: 10 Players That Could Put San Antonio Spurs over the Top | Bleacher Report
After Sunday's win against Portland, the Spurs now have the NBA's best record with 20 wins and three losses. They have a claim to being the top team in the league and look like the Spurs teams of old...

Gregg Popovich, Tim Duncan: give and take of winning - ESPN
Tim Duncan's ability to give the Spurs just what they need strongly explains their success this season, J.A. Adande writes.

Spurs band together for another run - NBA - Yahoo! Sports
In a season full of change, Tim Duncan and the Spurs are hoping a little corporate knowledge goes a long way. - National Basketball Association news

I know I already did one of these, but this is one of my favorite Christmas songs and I like these light shows. I hope everyone has a very Merry Christmas and a Blessed New Year!