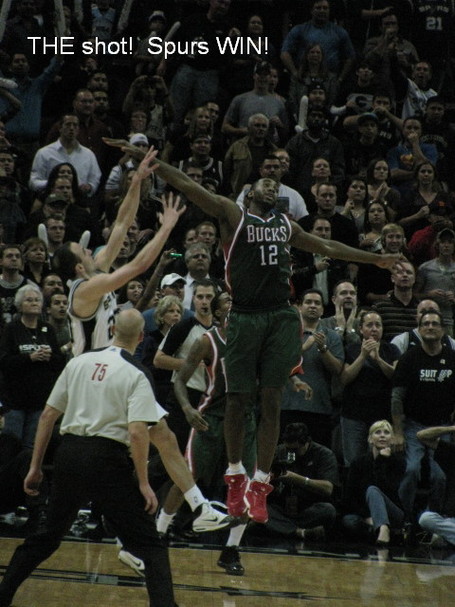 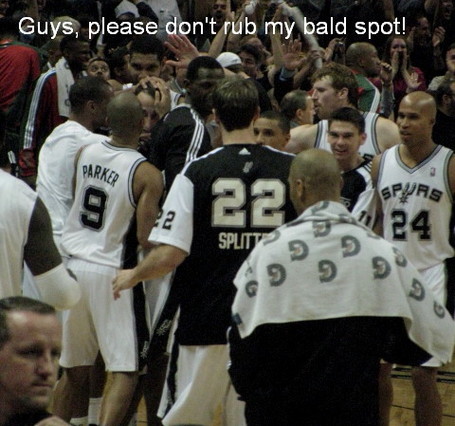 If Julie Andrews had been at the Spurs game tonight, she would have been singing: "Raindrops on roses, and baskets at buzzers..." And since the winning basket belonged to Manu, let's salute the man (oops, make that THE MAN) with a few "Manu Being Manu" moments:

(And a note about my LEAST favorite things: Windows shutting down this loaner computer without warning to add "updates" just as I was coming to the end of my post the FIRST time. But I suppose I should be grateful to have the loaner, right?) 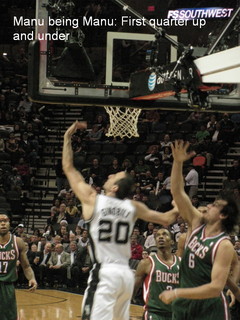 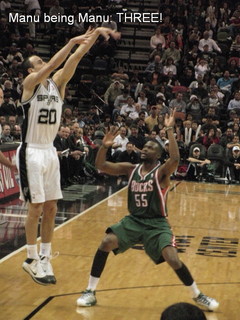 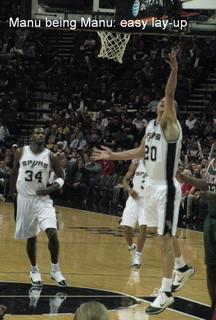 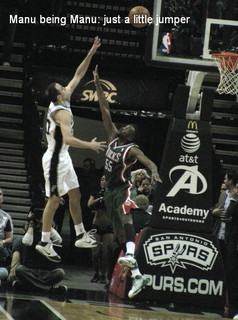 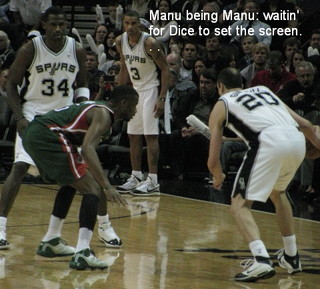 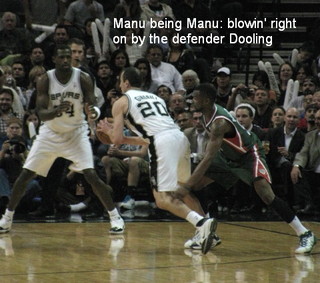 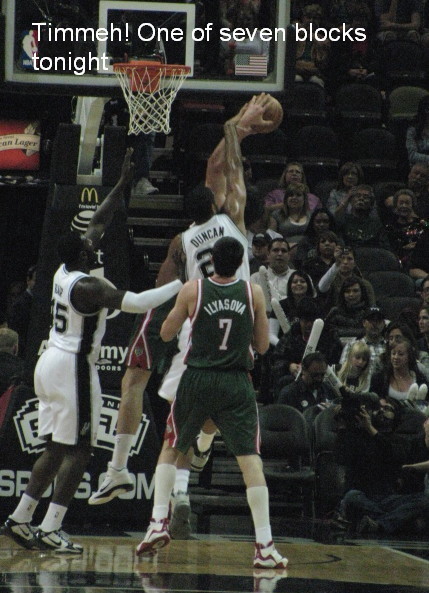 My favorite Duncan moment came when he dribbled the ball all the way down court on one possession, enjoying every bounce of the ball and not even thinking of giving it up to one of the guards. 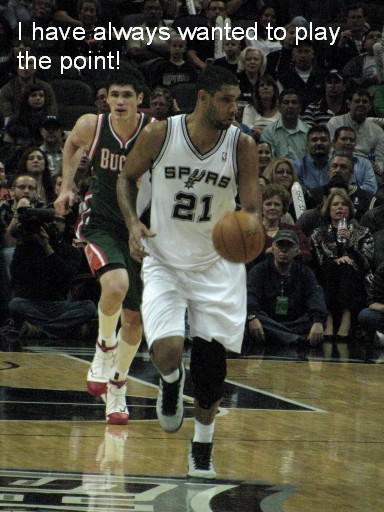 RJ had a thundering dunk, but only after learning the hard way that his short jumper was subject to being blocked by the Bucks' big men - 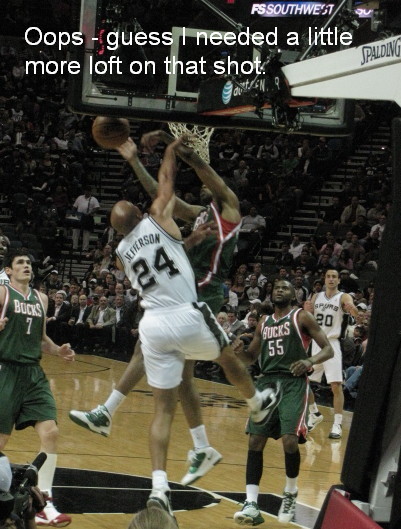 RJ grabbed a key defensive rebound late in the game: 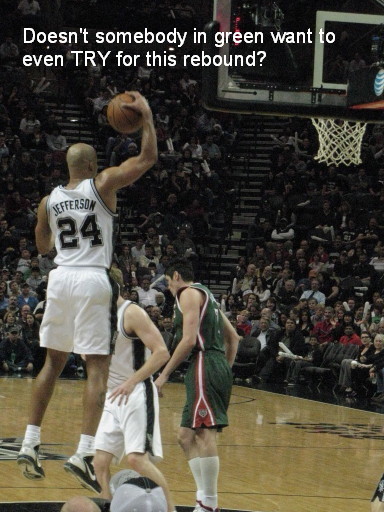 DeJuan had a moment against Bogut before having his playing time limited by a hyper-extended knee: 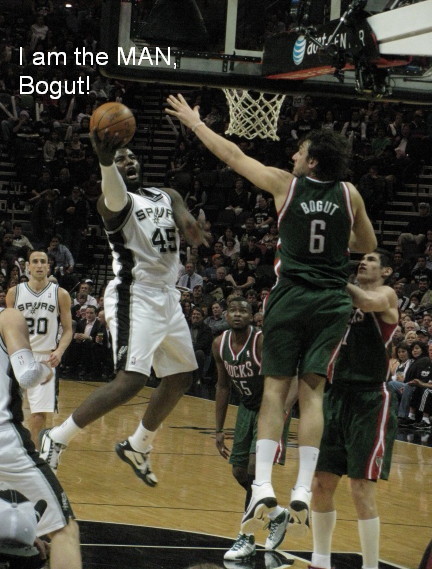 Milwaukee guard Earl Boykins is a man after my own heart. Listed at 5'5" he gives inspiration to those of us who are height-challenged. 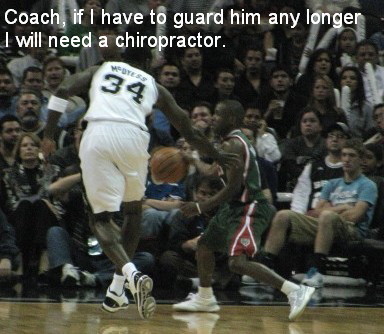 Basketball Jesus was back at the game tonight, with a sign that read "Five Gold Rings." PTR's Bella was sitting two rows behind me. We shared a "high five" after the game-winner by our guy. And then there was the group of 20 or so Argentines who managed to find me before and after the game (must be the scent of alfajores). They were singing and chanting Manu's name before the game, and after it was over wanted to know if I could go get him so they could have their picture made with him (all this taking place with another fan interpreting). I placated them by getting the security staff to let me take their photo at the edge of the court, which in itself took some doing because the staff had earlier scuffled with a woman who approached the Spurs' bench during the game wanting a photo with either Blair or Hill. When told no, she lost it, and it took at least five security people to remove her from the court.

Anyway, as I made my way back home to Austin, just as I turned the corner into my neighborhood, I was greeted with this display of Christmas lights - and "to all a good night." 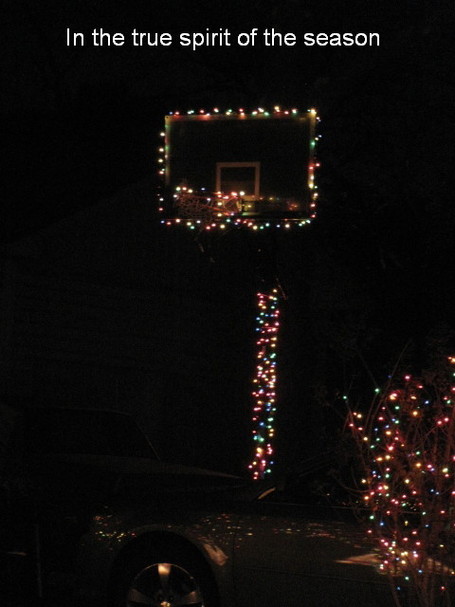