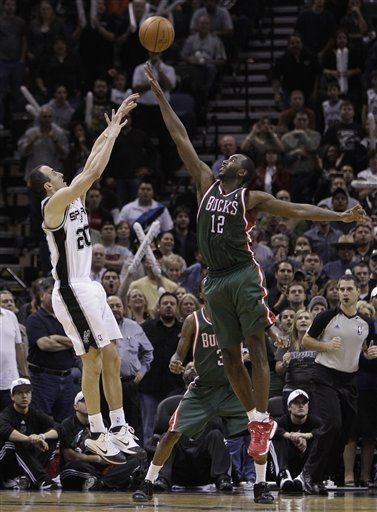 You did the best you could, Mbah a Moute.

After a tense and physical comeback attempt, the Milwaukee Bucks fell to the last-second brilliance of Manu Ginobili as the San Antonio Spurs improved to 21-3. The Spurs needed every point of a 51-35 halftime lead and a clutch Ginobili buzzer beater to outlast the Bucks and their mop-topped leader Andrew Bogut. The Big Four came through for the Spurs despite Bogut ending four Spurs' possessions in the last four minutes with blocks.

This was a game of three acts.

An elite team is in the middle of doing what they do best. It is the first timeout of an NBA game and the Spurs already have a 15-6 advantage. The Bucks are shooting 41% on the season and allowing their opponents to shoot 45%, and we're just the team to make that problem worse. Although the Bucks defense improves after the timeout, the Spurs are able to get good looks throughout the half. Or at least better looks than the Bucks: Jennings and Douglas-Roberts toss up bricks when the shot clock gets to single digits, and Tim Duncan is blocking anybody who steps in the paint.

This is a good time to mention all the players on the Bucks who aren't playing tonight. Micheal Redd still exists but is out who knows how long after knee surgery. Delfino is out with a neck injury/concussion symptoms, and Salmons tweaked his back and missed this game. Salmons isn't playing well, but his minutes went to Earl Boykins and Keyon Dooling, and their bench should have been thin enough to bust right through with Bonner threes, George Hill drives and a little defense.

But it wasn't really the bench who gets credit for taking a five point lead after the first quarter and stretching it to sixteen at half. It took Tony, RJ and Tim coming back halfway into the second for the lead to become a comfortable one. From 5:56 left 'til the half the Spurs had seven effective and crisp possessions with just two misses and two turnovers while the Bucks continued to flounder on their end of the court. With the score 51-35, you can't blame us for wondering how much rest Tim might get in the second half. Andrew Bogut had other plans.

Bogut and Gooden, not your Pappy's twin towers...

Bogut and Ilyasova were among the victims of that sixteen-five run to begin the game, and the people inflicting the pain were the Old Legend, Tim Duncan, and the new one, Dejuan Blair. Bogut comes out strong after the break with a layup and block on Blair but soon rests. The Spurs are able to keep the Bucks at arms' length, mostly thanks to George Hill and Manu, until near the end of the quarter.

With only a minute and change to go, Keyon Dooling sets up two quick jumpers to trim five points off the lead. After a beautiful Manu layup that should have ended the quarter, Brandon Jennings launches a 33-foot buzzer beater and buries it to get it to 71-63. We've gone from sixteen points up to just eight and can no longer say we're getting the easier shots. The Bucks went 4-5 on threes in the third quarter, and the Spurs were just 2-7 for the game at this point.

For every strength the Spurs have had this season, the Bucks had a second-half answer ready and waiting. Without three point attempts or free throw attempts to spice up the offense, we were the ones hoping to beat the shot clock. When we did get to the line - not even usually steady Ginobili was exempt from this - we were unable to cash in, shooting only 68% overall on free throws. Even our defense went sour. We had only allowed four offensive rebounds and five free throw attempts through three, but gave up four and eleven in the last quarter alone.

Meanwhile Bogut and Richard Mbah a Moute were proving they can subject teams to stifling defense themselves. Mbah a Moute and Douglas-Roberts provided the perimeter defense, and Bogut is that rare breed of big man who can defend Tim Duncan, the ball carrier, and the entire paint at the same time. The Spurs shot just 6-16 in the fourth, had zero second chances, and committed three turnovers. It was nothing short of harrowing seeing what two great defenders could do to the best offense in the league, and with our offense neutralized it was anybody's game. With the help of just a few lucky breaks and iffy whistles the Bucks had a good chance to steal the W.

It would have been Bogut's win, no doubt about it. With each block of Manu or Tony I grew more agitated, unable to even pretend that they had been fouled or that we'd be able to defend the ensuing transition attack. You can keep your Brook Lopezes, your Gasols, Bynums, Perkinses, Howards and Boshes. My money is on Bogut for the best both-way big in the game today (not that it's an original opinion).

With the game tied at ninety and nine seconds on the clock, Manu gets the inbounds pass from Bonner and bleeds it down to five or four seconds by slowly dribbling it over to the halfcourt logo. The only play going seems to be Tim putting a screen on RJ's man in the corner; this is probably just to clear Bogut out of the lane so Manu has the option to drive. Bogut doesn't bite and stays close enough to cover if Mbah a Moute gets beat to the left.

And for a second, it looks like that's exactly where he needs to be, as Manu almost gets past Mbah a Moute and drops a sharp dribble on the elbow. Instead of the eurostep to the lane, he takes a big leap to the side - Mbah a Moute stays very tight on him - and gathers the ball high above his head and shoots a falling jumpshot. It glides in as the clock hits zero and Manu only has time for a small fist-pump before he's swarmed by teammates.

Tim Duncan - six of ten shooting, eleven rebounds and seven blocks. He matched Bogut block for block and provided some of the same interior defense.

Richard Jefferson - Eleven points and nine rebounds, many of them contested by the long-armed Bucks.

Manu Ginobili - A Manu stat line for the ages: Twenty-six points on nine of fourteen, with six rebounds, four assists, and his second last-moment step-back jump-shot this year. He saved us from overtime and it sure looked like the team was glad to have him signed, starting and healthy.

Next Opponent: A SEGABABA tomorrow, Thursday night at 9:30 Spurs Time: vs the Denver Nuggets at Denver and on TNT.