Well, it seems that while I was getting my teeth drilled on today it escaped my mind that I needed to get the Bucks at Spurs preview going. So, much like myself at the dentist, you folks are going to have to suck it up and hope things are filled in properly. 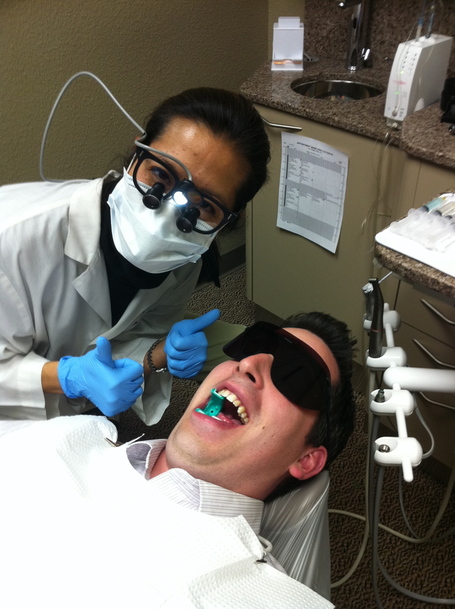 Yes this actually is me at the dentist. They make you smile...or bad things happen.

On top of all of that, I'm a Texas Rangers fan who is trying to cope with Cliff Lee (one of the best pitchers going) signing for less money with the stupid Philadelphia Phillies after telling the Rangers and their fans (basically me personally) that he loved his time here and would like to come back. I found out at 11:20 or so last night and my poor pregnant wife listened to nothing but me complaining about pitching, baseball and the stinkin' Yankees.

Well, at least the Spurs are looking good despite not looking their best. I will say that the best thing about watching this team is the fact that even when they don't play up to their potential they are still blowing teams out. You have got to love that.

Here's a joke that makes me feel better (for those of you who missed it): What's the difference between a Cheerio and Longhorn? You can find a Cheerio in a bowl. HEY-O!

Well, it's Christmas time and this one of my all time favorite songs is the following is an artist that helped us with the mojo last time around so enjoy:

On to the hack preview:

PG: Jennings is a quick PG who can score. I think Parker might have his hands full on defense. That said I expect Parker to dominate Fisher in this match up. Parker should be able to penetrate, but he might have a tough time with the interior of the Bucks D.

SG: Manu should own here. Salmons is a nice player and will need to be guarded. Manu is playing out of his mind...not in a good way, but I think the two Spurs will motivate him to dominate Salmons and the Bucks. Manu is having a tough go of it the last couple of games with turnovers, but I don't expect that to last much longer.

SF: RAGE is playing great. In fact he made need the ball more as seen in greyberger's Stats Roundup. RJ is being super efficient with his shots. He is hustling and he's playing against a guy I've never heard of. I'm sure we'll see plenty of Maggette, but Luc Richard Mbah a Moute (or LRMaM as I like to call him) is the starter, at least according to ESPN. Jefferson should be able to handle this match up.

PF: Blair had a really nice game against the Hawks and has been playing very well. So much so that Splitter has been relegated to sharing the Human Victory Cigar duties with Quinn. Sanders is a rookie that probably would have looked good in Silver and Black. He's big and seems to have potential. The Bucks are a great rebounding team with the help of Sanders and crew.

C: Timmeh is playing amazin despite scoring very few points of late. You think he's learned to take a back seat offensively from a guy named Robinson? Bogut is a nice player, but the Aussie can't hold a candle to Duncan. I think Timmeh owns here. Blocking out will be a key for Duncan and crew.

Basically the Bucks have Dooling, Maggette, and Douglas-Roberts coming off their bench. The Spurs will look to SAM, the Red Plague, the Nailman, Cubits and the Human Victory Cigar Twins. I like the Spurs here.

Well, the Bucks are an awful offensive team. They are 2nd to last in offensive efficiency and dead last in FG%. The Spurs should be able to take advantage of that. On the other hand this team can play defense and rebound. The Spurs will need to flex the offensive muscle tonight and make sure they clean up the glass.

Fortunatly the Spurs have plenty of offensive muscle and they like to flex. I'm not sure where that came from, but it is late.

Key 1 - Rebounding. The Bucks have a very good rebounding team. I wouldn't be surprised to see more of Splitter in this game. Blair can be effective by putting pressure on the their defensive rebounding.

Key 1A - Ball movement. The Bucks are pretty good defensively and the Spurs will need to get the offense going early. Manu and Parker will be the key to getting things going.